Charlie Lundie from Churchill has won the 2011 Hudson Bay Quest…the first time a musher from this town has done so. Lundie crossed the finish line in Churchill at 6:06 pm, March 19th with a time of 30 hours and six minutes..just two minutes ahead of second place finisher Peter McClelland of Ely, Minnesota. This year’s race originated in Gillam, Manitoba for the first time in the race’s history.

When one familiar with the world of sled-dog racing hears or sees the word “quest”, one instantly thinks “Yukon Quest”..one of the most challenging, well-known races in the world. However there is another “quest”,… a bit smaller, but never-the-less quite formidable that takes place every March placing the small coastal village of Churchill, Manitoba in the spotlight around mushing circles.

The Hudson Bay Quest began in 2004 and continued until this year with an alternating route between Churchill and Arviat, Nunavut along the coastal barren lands connecting the two. Wildly unpredictable weather made this 200 mile journey comparable to even greater challenges such as stretches of the Iditarod and aforementioned Yukon Quest…the perennial harbingers of sled-dog races. In fact the Hudson Bay Quest has now been recognized as a qualifier for both races.

The race committee decided to reroute the race this year due to safety and logistical obstacles caused by the arctic weather hazards encountered out along the sea ice of Hudson Bay. Instead of alternating years between Churchill and Arviat in Nunavut territory to the North, the race will now run from Gillam ,in the south,to Churchill each year. The route intersects with the Hudson Bay rail -line at the midway point making provision drops and race logistics less strenuous. In recent races on the old route, mushers have been lead off-trail in blinding whiteouts and snowstorms by their dog teams to the point where their lives as well as the dogs lives have been in grave danger…is there any other kind? Canadian Rangers have been on hand each year in force to help facilitate the mushers safety on and off the trail though some conditions have also placed their safety at risk. The new route will allow the emphasis to be placed back on “mushing” for mushing sake and not on the diabolical weather patterns.

The Winnipeg Jets were a professional hockey team in the NHL from 1972 – 1996. The team was forced to relocate to Phoenix, Arizona that year due to the economic downturn though hockey in the great white North still thrives. While talk of a  franchise returning to Winnipeg, possibly from Phoenix itself escalates, other forms of Canada’s national pastime are observed in the interim. One such display was caught on film by Natural Habitat guide Brad Josephs this past polar bear season out in the Churchill Wildlife Management Area with an excited group of travelers. “>

A new plan for a polar bear exhibit at Assiniboine Park Zoo was unveiled this month with plans for a 10 acre park housing up yo six polar bears. A research center, interpretive center and orphaned cub rescue center will complete the exhibit complex. This should be quite the undertaking and  as zoos go, Winnipeg weather won’t have a hard time matching Churchill’s chilly Winter temps. Here is a link to get a more in depth look at what’s to come. journeytochurchill.com

While all of the male, juvenile and non-denning female polar bears have long been hunting seals on the frozen Hudson bay, there are still polar bears around the Churchill area. Wapusk National Park is the primary polar bear denning area in North America. This expansive region adjacent to the Churchill Wildlife Management Area (CWMA) and land to the South of Churchill, has abundant dens both active and non-active. 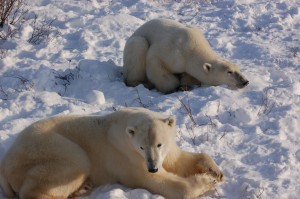 END_OF_DOCUMENT_TOKEN_TO_BE_REPLACED

The largest natural Habitat group of the Winter season journeyed from Winnipeg to Churchill via VIA Rail, Canada’s Amtrak, with hopes of gazing skyward to view the Aurora Borealis.  Guide Karen and her 15 hearty travelers from Texas, Florida, Maine, New York, Idaho, Mexico and even France found the gold they had hoped for at the end of the train line. This gold was in the form of green arcing bands. 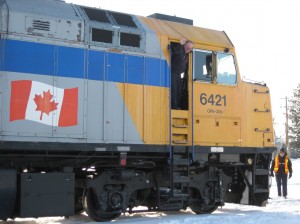 Via Rail Northbound to Churchill.