As the late Winter, otherwise known to most of us “Southern folk” as Spring, churns on in the Churchill region, a few more breaks in the ice, known as leads, appear. The temperatures have remained fairly steady the past week or so with minus 20’s C filling the air most days. Some scattered snow showers have kept the snow around the area looking fresh with a white top-coat.

The consistent cold bodes well for polar bears hoping for an extended season of seal-hunting on the Hudson Bay ice pack. With the late freeze -up last Fall, the ice still has some fragility despite the normal cold of this Winter. If the region were to receive an extended unusual thaw period, it could be devastating. The thaw coupled with heavy Northern winds allows for the propensity for ice break-up. Fortunately, it looks as if the season will continue without any risk of such early weakness in the surface ice. Consistent cold temperatures have allowed ice to continue forming throughout the season without interruption. We should see some healthy bears come Summer and into Fall. Can’t wait.

Winter in Churchill is a perfect time for the many local artists to work on their craft. Painters and stone carvers comprise the majority of local artisans, however technology has opened up a new door to artistic expression. Check out this animated video of Churchill by artist Kim Hunter. It portrays Churchill and the North in a refreshingly new way that anyone who has been fortunate enough to visit or live there would appreciate deeply.

Churchill has seen a little warming trend with temperatures just above the freezing mark. Melting snow and fear of an early break-up have fueled the global -warming theories. Fortunately the current temperature is -9C with light snow and the extended forecast for the week is colder temperatures in the -20s C …back to seasonally cold weather. The longer the ice lasts into Spring the better…especially with the l;ate freeze last Fall. Numerous  sows and cubs as well as their tracks have been seen crossing the land between Wapusk National Park and the Hudson Bay as the family units make their way onto the ice to hunt seals. We will be watching the weather intently over the next two months…stay posted!

Meanwhile up North…while the bears are doing their thing on the ice encrusted Hudson Bay, another marine mammal literally lies in wait for the break-up.. allowing them to migrate South for the Summer. I know it seems a little backward in the migration process. 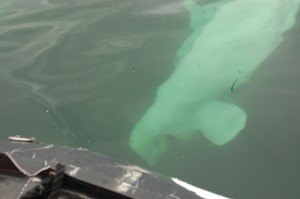 At the outset of my Arctic Summer guiding career about 14 years ago, I could not grasp why beluga whales migrated North at the end of the late Summer. Believing that as you traveled further North you would encounter  colder temperatures  and more ice -pack in any body of water, I was constantly questioning the beluga’s decision making. Should they not be searching out a ” Southwest passage” of sorts…a hidden estuary or river system that would land them in the Caribbean for the Winter? And how, at any rate, could they survive the Winter up North when everything is frozen and they need to have access to open water to breathe every 10-12 minutes at the very least.

Well, we all know about open “leads” in the pack ice…the water lines that appear when ice pans or floes break apart due to currents and winds. Most of these leads are unpredictable and close up almost as fast as they appear. For beluga whales to Winter over in a certain area they need that predictable open water. Enter the Hudson Straits. As you can see on the map, the straits are pretty far northeast of the Hudson Bay. When one sees how the lower Hudson Bay as well as the Churchill River freezes up solid, it’s natural to assume anywhere North of 58.44 degrees latitude would as well. Well most of the open water does but there’s a current system in the Hudson Straits that allows for a wide expanse of continually open -water. This area is known as a “polyna”, a Russian word describing an enclosed area of open water surrounded by ice.

Researchers have found polynas in the Hudson Straits and have tracked large pods of Hudson Bay beluga whales to these sights. They still have not discovered exact evidence as to why the whales migrate to this location. One theory is for the whales to escape predation by killer whales though their isolation in the ice surrounded polynas increases their chances of polar bear predation. Another thought is rich Arctic cod and char fishing grounds. However, many theories still point to the fact that this current influenced, open water is a predictable Winter respite where the whales use their fine tuned echolocation capabilities to dive below ice and return to the open expanse of water. Continuing research should provide more answers.

Click here to see ice formation in the Hudson Straits.

When you arrive on the Environment Canada page, scroll down to Hudson Straits and click. You will see the open polyna in the straits. Browse through the other areas that are current and you can see ice depths and coverage.

All Bears on Ice

As “Spring” approaches in the North, most, if not all polar bears are enjoying a fine seal-hunting season on the frozen Hudson Bay. As we know, the vast majority of bears left for the ice around the end of November when the Hudson Bay froze sufficiently to allow the massive bruins to begin their annual quest for seal meals. 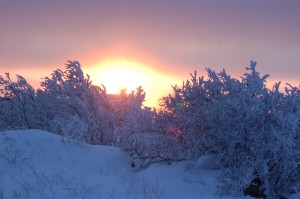