Looking Back At Polar Bear Season 2011

Churchill sort of slows down this time of year with activity and news. Wildlife sightings diminish as well..save for some searching around for the eight bird species that over-Winter in the region. An occasional arctic or red fox appear from the windswept snow carving grooves into the frozen snow banks. Polar bears, sometimes just a short distance from land out on the Hudson Bay, become invisible with all the whiteness of the ice pack and the incessant blowing ice crystals. Sled dogs loose from their chains roam around tundra hummocks on the outskirts of town and would be mistaken for polar bears by novice visitors if this were October or November. All in all, the land becomes frozen in time and the town is not far behind. In a couple of more weeks life will start to creep back in somewhat as Gypsy’s Bakery will reopen its’ doors and locals will gather at the large table near the coffee machine to talk. 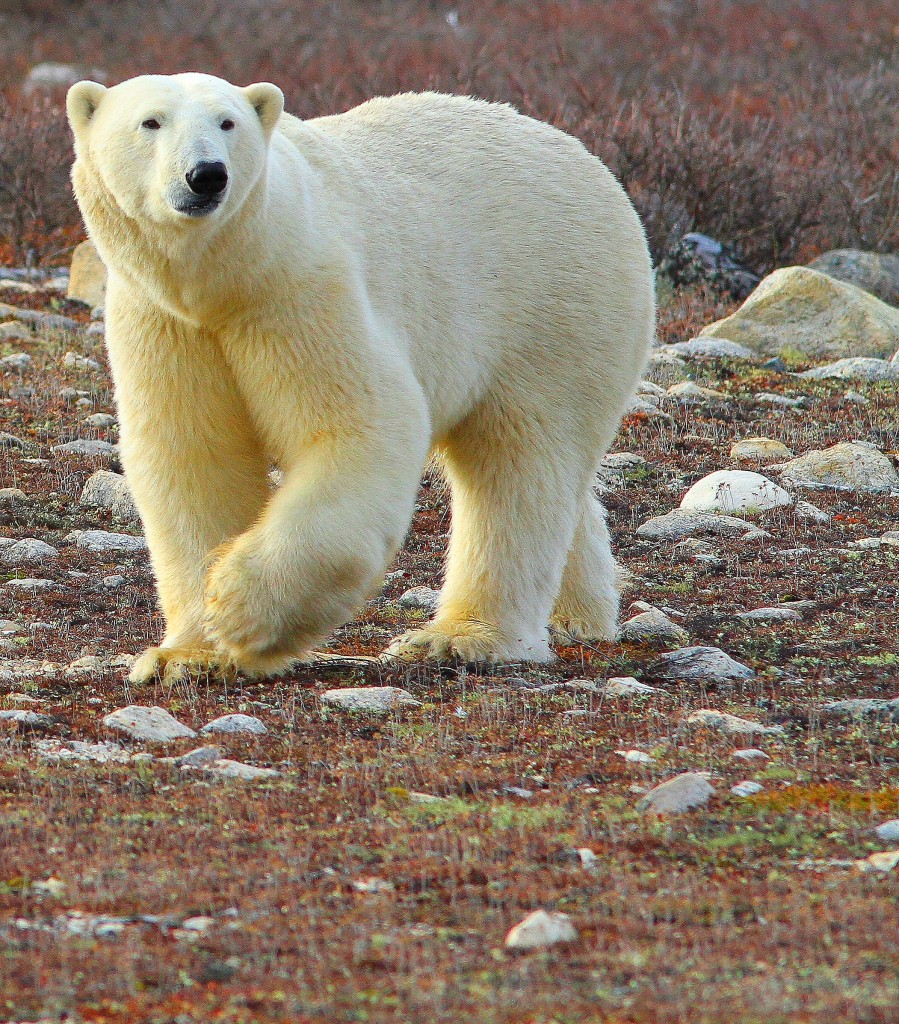 March is the beginning of the weather ” break-up” and talk of the river ice “break -up” will naturally work itself into conversation. The cold will slowly ease its’ grip on the region and ice will break free from the land and in the river. An occasional sow polar bear with cub(s) in tow will emerge from a den in Wapusk National Parc and venture out to the pack ice in the Hudson Bay. Daily events start to point toward the blooming of Spring and any early signs only escalate the anticipation. Soon enough the beluga whales will be heading up river to Mosquito Point and various gulls and terns will be airborne looking for capelin brought to the surface by those same feeding whales. Wildflowers….uh wait a minute..now I’m going to far…getting ahead of ourselves a little..save that for late march/early April. Winter won’t let go that easily.

So..in anticipation of the Spring though still not too far away from last polar bear season here are some of the best shots of that memorable season. Many of these shots will be archived on display in the new website featuring polar bear photography coming soon! Keep an eye out. 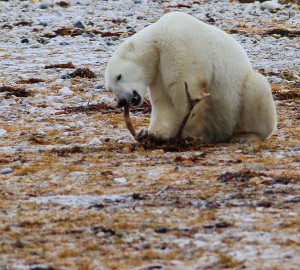 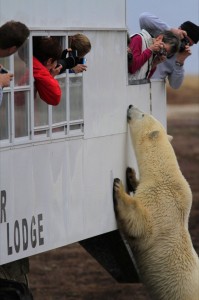 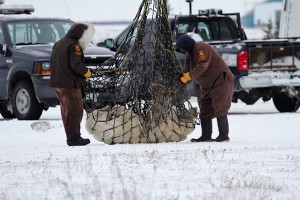 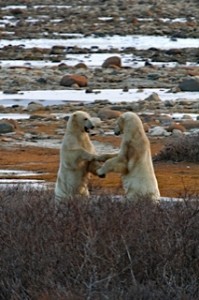 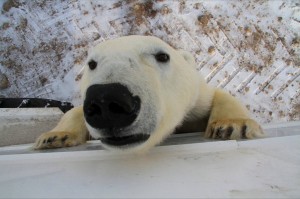 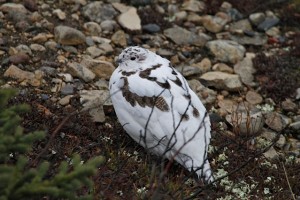 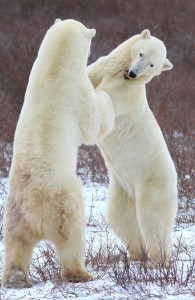 Travelers with Natural Habitat Adventures in Churchill last week were greeted by stormy snow squalls with periodic clearing in the night sky revealing constellations and glimpses of a ripening moon. Guide Karen Walker unveiled an Arctic experience-albeit devoid of aurora borealis due to the storm- that captured the imaginations of an avid group of many serious photographers. Magnificent pictures were produced that captured Churchill in the heart of Winter’s grip over the region. 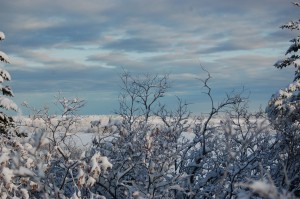 A 36 hour voyage by rail culminating over the last barren stretch of the Hudson Bay Railroad line was a memorable beginning to the trip. Escorting three sled dogs for Kelly Turcotte and Churchill River Mushing provided a unique experience for the group and some particular dog – lovers within Karen’s clientele. During the trip, a couple of the canines broke loose in the baggage car and caused a stir before being corralled and returned to their crates. Karen  was able to obtain a more proficient kennel in Thompson. A chilly late night, rather early morning walk in the Pas gave the dogs much needed exercise and stress relief for the second half of the trip. Just being a part of their transition from the South to their new home in Churchill will stay with these avid travelers forever. If not for them the trip would have been a “ruff” one indeed. By next Fall these pups will be pulling sleds over the tundra.

Arriving about 11:30 am the group made their way over to the stone inukshuk on the shore of the Hudson Bay just recently plowed out from a storm. This iconic symbol has taken on an welcoming tradition to travelers anxious to discover the Arctic’s secrets. The sentinel stone “sculpture” of sorts looms stoically before the vast frozen bay. For anyone who’s visited the north, this symbol is burned in memory forever. Also, personally, whenever I venture to an ocean destination I feel the urge to immediately go and take in the wild vastness of it all…frozen or not.

Native elders Caroline Bjorklund and Myrtle DeMeuelles presented their Dene and Metis cultural talks to the group and Myrtle’s caribou hair sculptures were eagerly purchased by many. Many of the native art and jewelery pieces in Churchill are unique, one – of – kind items only found up North. They all seem to be pieces of the land and derived from the fabric of the culture. 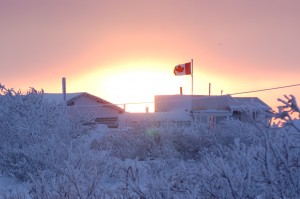 Some of the photographers opted to wake early mornings to capture the rich orange glow of the sunrise. While out around the outskirts of Churchill, some of the unique bird-life that resides year-round in the area was observed. Hairy red polls out at Bill Calnan’s property on goose Creek Rd as well as pine grossbeaks, boreal chickadees, and common red polls out in the boreal forest.

Wapusk Adventures and veteran musher Dave Daley provided a day of dog sledding fun despite the -51 C feel with the wind chill factor. if one is mentally prepared then the temperature can be handled for awhile …chalked up to an amazing experience. Some of these same dogs with be competing next month in the Hudson Bay Quest from Gillam to Churchill on March 16th.

All in all another cold though amazing tour in the beautiful North!

The aurora borealis is visible in the Northern sky throughout the entire year. However, as February and March -prime viewing time- draw closer, so do hundreds of eager and somewhat crazy travelers to the town of Churchill, MB nestled on the Precambrian shield of the Hudson Bay. While local Churchillians often view the “Northern lights”,as they are also known,as a beautifully, majestic experience, they certainly find it hard to grasp why people from all over the world travel to Churchill for a chance to see them. Whatever stirs inside these brave souls for them to venture to the frigid, frozen Arctic can only be understood by someone feeling the same passion for the North.

Over my many years in Churchill I personally have seen the aurora in the Fall polar bear season and throughout the Summer months on numerous occasions…though August being the best of those Summer months due to shorter days and more chance to view them. The Fall season-October and November- can be stellar viewing but sightings are random and less predictable then mid-Winter. Predominant reasons for this is the 800 sq mile body of water lapping the shores of those Precambrian rocks known as the Hudson Bay. This massive oceanic bay remains ice- free well into late November and even then will not freeze completely until another month or two. This allows moisture to be sucked up into the air in the region which is at war so to speak as warmer Southerly winds battle Northerly chilled gusts for territorial rights. Despite global warming, the cold Northerly winds always are victorious only getting colder as the Winter trudges on. Sometimes it feels as if time comes to a halt…the past few days in Churchill have been in the -40’s C with that infamous “wind chill” factor. And yes..it is a very large factor!

Now that the season for viewing the lights is upon us, it is not always a guarantee you will see them. Last year was out of the ordinary as viewing was minimal during this same time. Travelers with Natural Habitat’s Aurora trips came away quite satisfied however as guide Karen Walker was able to provide them with a fantastic “Arctic-like” experience that cannot be simulated on your ipad from your comfortable couch. Just experiencing the harsh cold and the ways and culture of the people in the North embeds an experience one will never forget. There’s something about everything you experience under those conditions that sharpens the memory like the tip of a hanging icicle. Life as most know it slows to a zen-like stillness only enhanced by the cold. Senses are sharpened so that each and every detail of daily life gains importance. Dog-sledding across vast treeless tundra becomes a life changing event.

Speaking of dog-sledding …the Hudson Bay Quest is drawing near. Thirteen mushers are registered thus far to depart Gillam,MB and race 200 miles to Churchill for the championship. Charlie Lundie from Churchill will be defending his title as the first Churchillian to win the prize. Race organizer Dave Daley will also be mushing with hopes to win as well. I’m hoping to get one or both of their thoughts and expectations on the race in the next few weeks…stay tuned.

Leaving you with this amazing video of some aurora from space.

Visit msnbc.com for breaking news, world news, and news about the economy