The bearded seal is a fairly large animal, with both sexes reaching over seven feet in length and weighing about 573 pounds. They are grayish in color, darker on the back, with a scattering of rather small dark spots. As the name suggests, the bearded seal has long whiskers covering its nose and chin. Each whisker is smooth along its length, and not beaded, as they are on other seals (except monk seals, which also have smooth whiskers). Another characteristic that bearded seals share with monk seals is the presence of four nipples–other seals have only two. 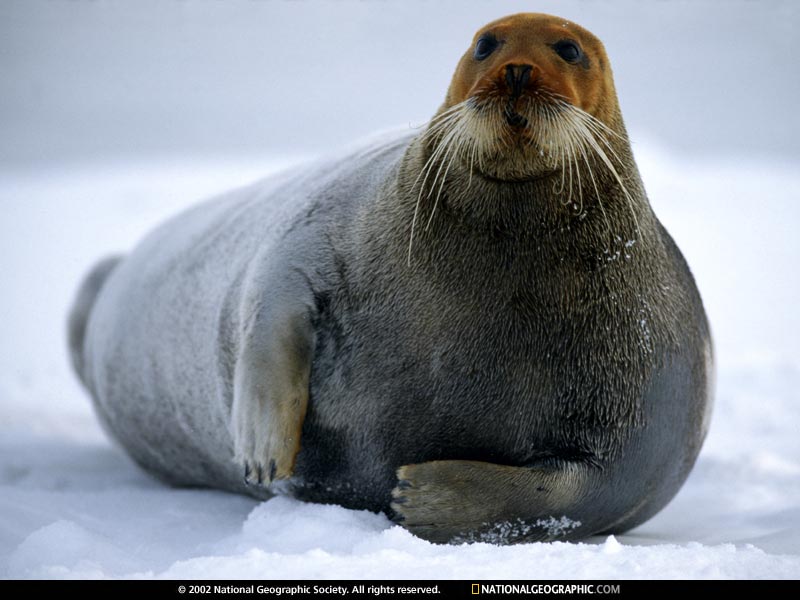 The golden eagle is North America’s largest predatory bird. With its six-foot wingspan and effortless soaring flight, this powerfully built species is an impressive and beautiful sight. Golden eagles are distinguishable from other birds of prey by their great size and flat profile of head and bill. Adults are largely dark brown, except for a golden area near the crown, nape, and sides of the neck and face, which give the bird its common name. The tail is grayish brown.

From below, the large flight feathers of the wings appear to be brownish gray, while the head, body and smaller feathers on the forepart of the open wings are blackish. The eyes of adult golden eagles are dark brown, and the bills and claws are black, with a yellow cere and feet. The legs are feathered all the way down to the toes.

Golden eagles range in length from 27 to 35 inches and have long, broad wings, with a wingspan measuring from six to over seven feet. Males and females are similar in appearance, but females are much larger than males. Females range in weight from 8.6 to 13.5 pounds, whereas males range from 6.6 to 12 pounds.

Juvenile golden eagles appear similar to adults, except for light patches on the tips of the wings, and a wide white band on the tail and a terminal band of black. This plumage is sometimes referred to as its ‘ringtail’ plumage as a result of these bands. Juveniles attain adult plumage between ages four and six years.

Bearded seal pups are born in a grayish brown lanugo, with scattered patches of white on the back and crown. Births take place on pack ice between mid-March and early May, and the lactation period lasts for about 12 to 18 days.

The bearded seal has a circumpolar distribution that corresponds closely to that of the ringed seal–it is found all along the European, Asiatic, and American Arctic coasts and their associated islands. It is essentially, however, an Arctic and sub-Arctic seal of relatively shallow waters. The world population has been estimated to be between 600,000 and one million.