Ursus maritimus means ‘sea bear,’ and this is exactly where polar bears are usually found – near the active zones where sea ice and open water mix. Polynyas are areas that remain ice-free throughout the winter, and it is in these areas where the larger marine mammals, such as whales and seals, congregate to feed.

Polar bears are excellent swimmers and will enter the water to catch food or to escape danger. When entering the water, a bear may carefully slide in backwards from the edge of an ice floe, or it may just leap in headfirst. Using only their fore – paws as flippers, they can swim at an average speed of about six miles-per-hour up to 60 miles without resting; these big white bears have been seen on ice floes 200 miles offshore. When emerging from the water, the bear usually shakes itself like a wet dog.

Polar bears seem to enjoy swimming and are excellent divers as well. They can remain submerged for up to two minutes, as they cruise along at depths from 10 to 15 feet. While under water, their ears are flattened and their nostrils are closed, but their eyes remain open. In the wild, they may occasionally hunt seabirds by diving and coming up underneath them. They may also take crabs and other shellfish from the shallow sea floor.

In addition, polar bears use their swimming ability to stalk seals in open ‘leads’ – long cracks broken in the sea ice by wind or tidal currents, which may remain open for only a few minutes to several days. Sometimes a swimming polar bear will leap out of the water in order to surprise a dozing seal resting on the edge of the ice. Several accounts tell of polar bears leaping seven to eight feet into the air from a swimming start. They have also been observed floating motionless and gradually drifting within striking distance of their prey.

Polar bears are great travelers, walking huge distances every year. During an average lifetime, an individual bear may have traveled across 100,000 square miles of Arctic wilderness. Their wide feet allow them to move through deep snow, but to save energy, they prefer to travel on a solid surface, like ice or bare ground. When descending steep hillsides, the bear may assume a semi-reclining position and use its extended forelegs as brakes. Polar bears have also been seen climbing steep ice cliffs and ‘sledding’ down hills on their stomachs. 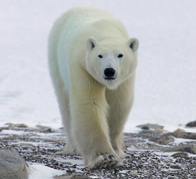 The polar bear’s normal gait is a kind of ponderous shuffle at a steady rate of about 2.5 miles-per-hour, though if pressed, a polar bear can break into a run with a top speed of over 30 miles-per-hour. However, most polar bears seem to tire quickly and take the first opportunity to lie down and rest. Paul Watts, a researcher with Canada’s Institute of Arctic Physiology in Churchill, Manitoba, has studied captive polar bears walking at different speeds on a treadmill and has measured their oxygen consumption. According to Watts, “Although polar bears have to migrate large distances, they are very inefficient walkers. They require up to twice as much energy to walk as would be expected for other mammals their size. It’s probably because of their massive legs and the whole structure of their build. Evidently, the trade-off is to be able to have these massive forelegs in order to break through seal dens or to flip a 300-pound seal out of the water with one paw.”

Like nearly all bears, polar bears exhibit a remarkable range of behavior. Eskimo folklore recounts stories of the bears covering their dark noses with a paw or a piece of snow to keep from being seen while stalking a seal on the open ice. Other observers have seen bears use blocks of ice to break into seal igloos in order to reach the seal pups. Dr. Charles Jonkel, who spent considerable time studying polar bears in Manitoba, once saw a polar bear push a large, flat rock 100 feet across the ground and onto the trigger mechanism of a live trap set for the bear. With the trap sprung, the bear then leisurely ate the bait.

Although all bears are technically carnivorous, only the polar bear is almost exclusively a meat eater. Its diet consists mostly of sea mammals, such as ringed seals (the most abundant large mammal in the Arctic), bearded seals, and walruses. The bears will also eat shoreline carrion, like beached whales, fish, and crabs.

While out on the ice, a polar bear may go weeks without eating, living entirely off its fat reserves. The bear’s huge stomach allows it to take full advantage of any temporary windfall – it can eat up to 150 pounds of food in a single sitting! To maintain its body weight, however, on average, a polar bear must kill one seal every five to six days.

If the summertime thaw drives them ashore, the bears may roam the coast looking for food. They will eat carrion, reindeer, and eggs, and practically anything else edible, including berries and other plants. Summer may add an opportunistic variety of foods to a polar bear’s menu, but essentially, it’s a time of weight loss. Tidbits, such as fish or arctic hares, may be tasty, but they offer little energy for an animal of its size. Throughout the summer and early autumn, the bears subsist mainly on stored fat, and they slowly lose weight. The lost weight will be regained during the winter seal hunt.

A common hunting technique for polar bears is to wait patiently by a seal’s breathing hole in the ice. Bears have been seen waiting motionless by a hole for up to 14 hours. When the seal sticks its nose through the hole for a breath of air, the waiting bear springs forward and grabs the animal’s head in its jaws, killing it. In a show of incredible strength, the bear will stand up with the seal’s head still firmly clamped in its jaws, and pull the seal out of the water through its small breathing hole. An adult seal may range from 40 to 60 inches in length and weigh from 80 to 250 pounds. Sometimes the breathing hole may only be eight to ten inches in diameter, while the seal may be two feet or more in diameter.

Arctic foxes, gulls, ravens, or other polar bears will scavenge any remains that are left behind by the bear. During the winter, a bear may have an entourage of foxes and ravens following it hundreds of miles out on the sea ice. These foragers are completely dependent on leftovers for their survival. They must learn to keep a proper distance, however, as occasionally, a bear will kill a fox that ventures too close.

Another hunting technique involves quietly stalking a resting seal. When out on the ice, a seal becomes extremely vigilant, staying close to the water and waking from its nap every 20 to 30 seconds to look around. Lowering its head, the seal goes back to sleep for a few more moments before again raising itself to examine its surroundings. Each time the seal drops its head, the polar bear inches itself slowly forward, instantly freezing when the seal raises its head. The stalk eventually ends in a wild charge, when the bear suddenly springs up and bounds forward over the last few yards in an effort to grab and disable the seal before it can slip into the water. For some unexplained reason, some observers claim the bear always uses its left paw to kill the seal.

Sometimes a polar bear will stalk a resting seal by swimming very slowly toward it. When close enough, the bear will submerge, swim to the edge of the ice lead where the seal is resting, and then explode from the water, cutting off the seal’s escape route.

During the spring, about half the seals killed are newborn pups. Late in the winter, the seals’ breathing holes become covered with snow. If the snow becomes deep enough, the seals will carve out an ‘igloo’ on the ice directly above the breathing hole, where they will rest and give birth to their pups. A polar bear is able to sense the exact spot in the seal’s chamber where the breathing hole is located. When a bear crashes through the snow roof of the den, it is nearly always right at that spot. If the bear is quick enough to block the seal’s escape route, it will have earned itself a nice meal. Overall, fewer than 15 percent of a polar bear’s hunts will be successful. Individual hunting success depends on ice conditions and time of year, and varies greatly.