The ringed seal is the most abundant, widespread, and important seal to the socio-economy of the people in the Northwest Territories. It is the most common seal of the Arctic, with a population that may total six or seven million. This seal is found throughout the circumpolar regions of the Northern Hemisphere, and its preferred habitat consists of the leads, pressure ridges, and polynyas in the land-fast ice of the Arctic Ocean.

Ringed seals are small compared to other seal species; males are usually about 4.5 feet long and weigh between 145 and 200 pounds, while females tend to be a bit smaller, averaging 100 to 110 pounds. Their coats are made of stiff guard hairs and occur in various color patterns, which are basically light gray in color, with black spots surrounded by lighter ring markings (hence their name). On their backs, the spots are often confluent, giving the appearance of a dark stripe. Underneath, the coat is lighter, and their bellies are often a clear silvery-white to creamy yellow, with a scattering of black spots. 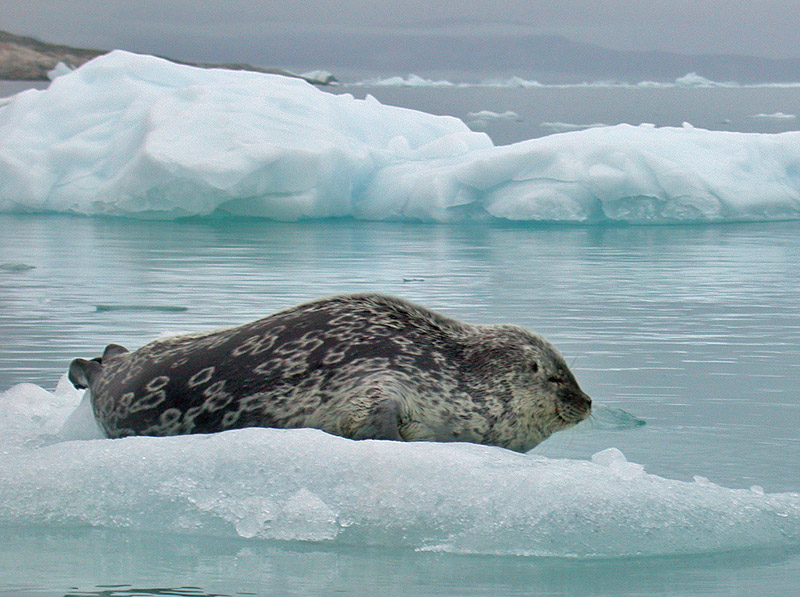 The ringed seal’s senses of vision, hearing, and smell are well developed. Their vocalizations include whines, moans, and growls. These creatures are curious and may investigate unfamiliar sights or sounds; basking seals constantly alternate between lifting their heads up for about seven seconds, and laying flat for 26 seconds, and they often heed warnings from other seals.

As with most seals, physiological adaptations, such as a high red blood cell count, the ability to reduce their heart rate from 80-90 to 10-20 beats per minute, and control over the blood flow to vital organs, have enabled ringed seals to make deep and sustained dives. Feeding dives average about three minutes, with one and a half minutes spent at the surface. Their maximum diving potential is about 295 feet in depth and 45 minutes in duration. Ringed seals dive vertically, tail first, rarely exposing their backs.

Primarily solitary creatures, ringed seals occasionally travel in loosely organized groups. They tend to form aggregates at haul-out areas such as ice cracks. Segregation by age occurs in winter when adults remain in their preferred breeding habitats under stable ice in bays and fiords, and non-breeders are found at the floe edge and move in response to food availability and population pressures.

While in the water, seals use breathing holes within the ice that are maintained by clawing the ice with their fore flippers. Before surfacing, a seal may blow bubbles into the hole to test for predators. The breathing hole is usually cone-shaped and is covered with an ice dome punctured by a small vent. If snow drifts over the hole, a lair may be hollowed out of it.

Sexual maturity in the ringed seal occurs between the ages of five and ten. After ten years of age, females have a high annual pregnancy rate. Breeding males can be identified by their strong, musky odor and their territorial behavior. The peak of mating activity occurs in April, and the embryo development is delayed for 81 days, followed by a nine-month gestation period.

Newborn pups average about two feet in length and ten pounds in weight. When one year old, they are about 70 percent of their mature size. Seal pups are usually born on stable ice in a snow den from mid-March to early April. The female will find a natural snow cave or excavate a birth lair in a snowdrift over a breathing hole. The den provides protection and warmth for the single pup during a five- to eight-week nursing period. Only the female seal will care for the pup, and she subsequently abandons it when the ice breaks up. Large numbers of seals can be observed basking on the ice at this time, usually in late June or early July.

The pup is born with a fine-textured, woolly white coat or ‘lanugo,’ which keeps the pup warm until it acquires an insulating layer of blubber; this lanugo is shed by the age of eight weeks. The molted pup, called a “silver jar,” has a silvery belly and a dark gray back of fine hair.

There are many predators of ringed seals, including polar bears, Arctic foxes, walrus, wolves, dogs, wolverine, sharks, gulls, and humans; about 26 percent of the pups in their dens are eaten by Arctic foxes. Ringed seals are the main prey of polar bears, which will catch one seal about every five and a half days.