The Canis lupis is commonly known as the gray wolf or timber wolf. The largest of approximately 41 wild species of canids, gray wolves vary in size based primarily upon geographic locality. Broad chested with small, rounded ears and long legs, this species usually weights between 44 and 165 pounds, and its body, from the tip of the nose to the tip of the tail, ranges from five to seven feet in length. A wolf’s height is measured from the base of its paws to its shoulders, and generally ranges from two to three feet.

Technically, the gray wolf has two fur coats – an undercoat and an overcoat. The undercoat is the thicker of the two layers and helps to trap warm air, which aids in temperature regulation. The hairs comprising the overcoat are coarse and hollow, providing insulation. Like its size, the gray wolf’s fur color is based on geographic distribution as well, and ranges from pure white in the Arctic populations, to mixtures of white with brown, cinnamon, and black, to nearly uniform black in some color phases.

The gray wolf’s streamlined body is built for trekking. Its long legs hang down from a torso that is as wide at the shoulders as it is at the hips. This means that the front leg and back leg travel in the same plane, affording the wolf a smooth, swinging stride that seems almost effortless. Traveling at a nonstop, five-mile per hour trot, wolves can cover up to 125 miles in a day. When the time comes to finally close in on their prey, they can crank their engines to a 45-mile per hour sprint.

Smell is this creature’s most acute sense, and the surface area within its nose, sensitive to smell, is 14 times greater than that of a human’s. Because of this, a wolf’s sense of smell is approximately 100 times greater than man’s. The wolf’s sense of hearing is much stronger as well. Wolves can hear up to 80kHz, whereas a human can only hear to 20kHz. Sight is the least developed sense in the wolf, yet its night vision is strong and superior to humans due to the high proportion of rods to cones in the retina.

From an early age, wolves are taught what and how to hunt during a long apprenticeship with their parents and other pack adults. As a result of this extended childhood, strong bonds develop. In fact, some pups remain with their parents their entire lives. Though it is infrequent, wolves do sometimes travel alone. Known as a ‘disperser’, a solitary wolf, whether male or female, travels solo for a short while, usually in search of a mate with which to begin a new pack. 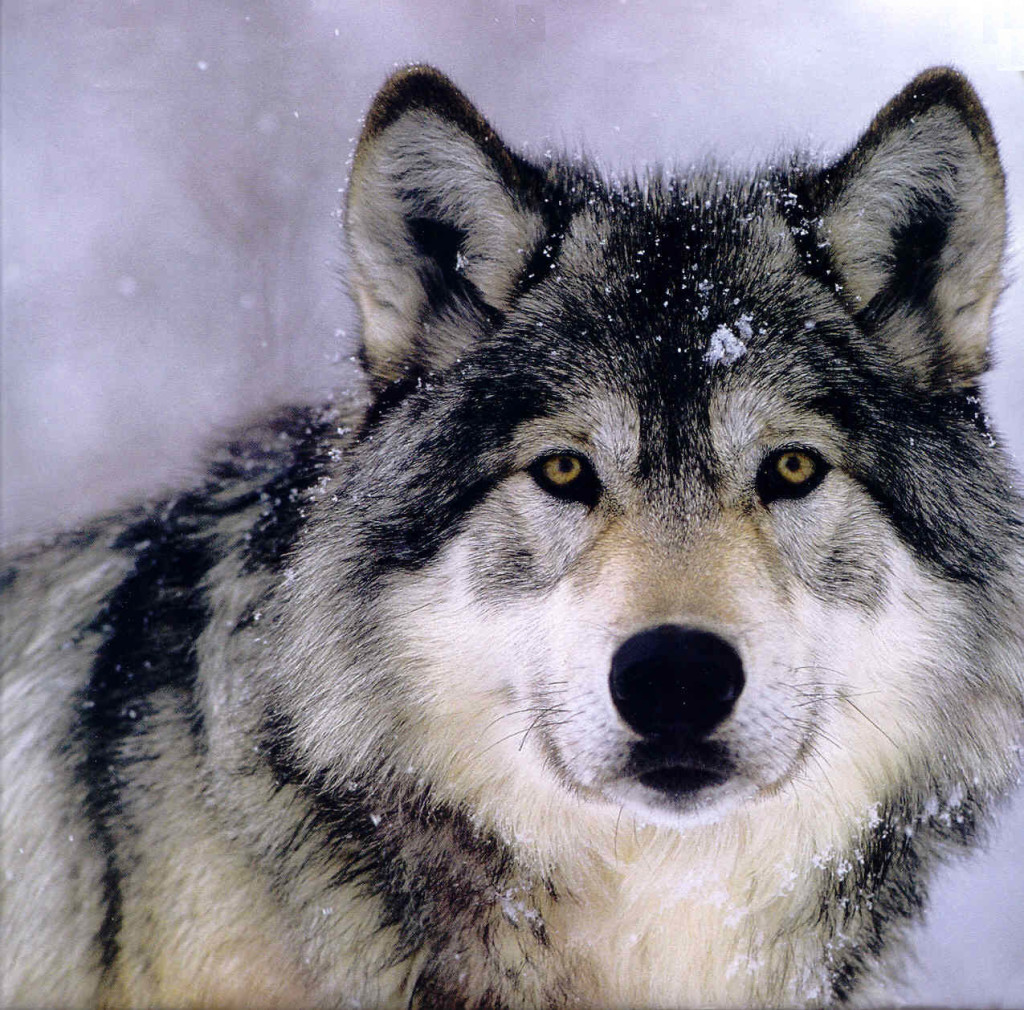 Wolves leave odoriferous messages in conspicuous spots throughout their territory, such as at trail crossings, directional changes, and bridges – the same places where humans might leave a blaze or a cairn to alert fellow travelers. Specific scent stations include rocks, stumps, logs, snowdrifts, or even sticks. It may be that wolves sniff these posts to help them make directional decisions the next time they pass. Or, they may read the scent to find out which wolf made the mark, what its sexual status is, where it was coming from, how long ago it passed, how healthy it is, and whether it is friend or foe.

Communication is very important both among wolves within and between packs. Wolves howl for several reasons – to communicate with separated members of their pack, to announce their presence to neighboring packs, and sometimes, just for the heck of it. A typical howling chorus begins with one, then two, then several voices, like strands braided together.

No two wolves howl in the same pitch, and in fact, they seem to prefer to vocalize in chords. If a newcomer enters a chorus already in progress with the same pitch as an existing wolf, the particular wolf that is being copied will automatically change its pitch. The reason for this might be communicative, in that wolf voices are distinct enough (to other wolves) to be like I.D. tags; separating their pitches allows them to be heard for who they are. Neighboring packs may also be able to pick out these differences, make head counts, and figure out whether it is worth trying to enter the strange territory.

After a pack howls, its members pause for 15 to 20 minutes, allowing for adequate response time should there be any other wolves within hearing distance. Sometimes, wolves decide not to howl back when a neighboring tribe calls across the ‘fence.’ The major risk of howling is that it pinpoints a wolf or wolf pack’s location, and if a neighboring pack wants to invade, they will know just where to find them. If a pack is sitting on a kill or protecting pups on a rendezvous site, however, it will be more likely to howl, stating ‘we are here and do not want a surprise visit.’ If it is not guarding any treasure, the cautious pack may decide to stay silent when the neighbors howl, and simply slip away while the going is good.

Wolves are among the most social of carnivores. The pack is made up of a family, including the alpha pair and their offspring of one or more years. Packs usually consist of five to nine wolves; the largest pack ever recorded contained thirty-six members. Pack size is usually determined by prey availability and size, and the number of wolves that can exist within a pack without causing conflicts among its members. A pack’s territory ranges in area from 50 to 5,000 square miles, and is fiercely defended against intruders. A ranking system of dominance is maintained within the pack that is based upon aggressive interactions among its members.

The social structure of a wolf pack often changes from year to year, as wolves in the pack move up and down within the hierarchy. In the event that the alpha male becomes injured or for some reason is unable to lead the pack, the beta male will take his place in the hierarchy. At that point, depending on the type of leader the alpha was, the alpha may or may not remain in the pack.

A lower-ranked wolf may also challenge an alpha male for pack leadership. If the alpha male loses this challenge, it will likely go off on its own, find another mate, and start a new pack. Wolves with a very low status in the hierarchy, who are often treated poorly by the other members, may also leave the pack. They will become lone wolves until they either form their own pack, or on rare occasions, join another pack.

The gray wolf is a carnivore, and is both predator and scavenger; prey is located by chance or by scent. Wolves primarily hunt in packs for large prey such as moose, deer, elk, bison, musk oxen, and reindeer, and they often control prey populations by hunting the weak, old, and immature. Once their prey is taken down, gray wolves usually utilize the entire carcass, including some hair and bones.

Lone wolves usually hunt smaller prey, such as beavers, rabbits, and other small mammals, which make up a substantial part of their diet. They may also eat livestock and garbage when it is available. Once they score a kill, they waste no time filling their bellies, eating as much as 20 pounds at a single feeding. This, in comparison, is like a 200-pound man inhaling two large Thanksgiving turkeys at one sitting. For the wolf, however, it is not a matter of gluttony, but the mere fact that its next meal may be some time away.

The animal’s long legs are built for speed and endurance, crucial elements to its endless quest for food. Its splayed paws are larger than a dog’s, giving the wolf an edge – enabling it to run on the top of deep winter snow, while its prey must laboriously break track. Compared to a German shepherd, a wolf’s jaw power is twice as strong – a destructive bite at 1,500 pounds per square inch.

Depending upon geographic location, breeding occurs between the months of January and March; northern populations typically breed later in the season. In gray wolf packs, the female chooses her mate (often for life), and the pair spends a great deal of time together. The alpha male and female is usually the only pair in the pack to breed; in fact, they actively inhibit sexual behavior in other members. After mating occurs, the female creates a den in which to raise her young. The den is often dug underground, with a 10- to 30-foot entrance leading to an area at a higher elevation (to avoid flooding), where the pups will be born and remain for several weeks. Other dens are under cliffs, under fallen trees and in caves.

The gestation period for gray wolves lasts between 60 and 63 days, and the litter size ranges from five to fourteen, with the average size being seven pups. Once born, the pups are cared for by not only the mother, but also by other members of the pack.

Gray wolf pups are born blind and deaf, weigh approximately one pound, and depend upon their mother for warmth. At 10 to 15 days of age, the pups’ blue eyes open, but they only have control over their front legs, thus crawling is their only mode of mobility. Five to ten days later, the young are able to stand, walk and vocalize. Sometime between the twentieth and the seventy-seventh day, the pups will leave the den for the first time and learn to play fight, which determines the ultimate pup dominance hierarchy.

As the pups reach maturity, they need to grow rapidly, as they must be strong enough to hunt with the pack come winter. However, until that point, the pack helps to raise the pups by bringing food to them, which it delivers to pups younger than 45 days by regurgitation. These pups cannot eat meat until six weeks of age, but require more nutrition for growth than is available in their mother’s milk. At approximately 10 months old, the young begin to hunt with the pack.

Wolves play an important role in the ecosystem by controlling natural prey populations and by removing weak individuals. As settlement increased, the belief that livestock was endangered by wolf populations also increased. As such, the frequency of wolf hunting exploded, and the populations were nearly eradicated. 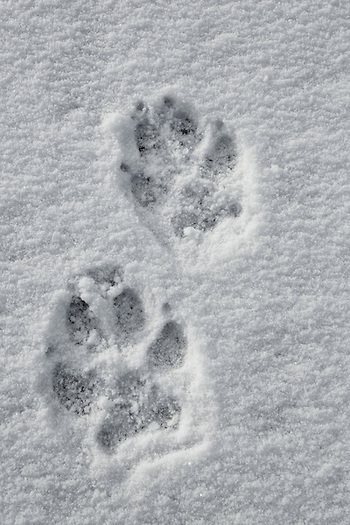 Currently in the lower forty-eight United States, about 2,600 wolves exist, with nearly 2,000 in Minnesota (compared to the few hundred living there in the mid-20th century). Successful recovery plans have been developed throughout the country, which evaluate the populations to determine distribution, abundance and status. The main cause of the population declines is habitat destruction, but the reintroduction of the wolf into protected lands has greatly increased the survival of the species in North America. Populations in Alaska and Canada have remained steady and sufficient. Currently, the state of Alaska manages 6,000 to 8,000 wolves, and Canada’s population is about 50,000. The wolves in Canada are managed by provincial governments and are not currently threatened