Sometimes called “the deer of the North,” the caribou, more than any other animal, is the symbol of the North country. No other large North American mammal carries out such extensive and spectacular migrations or occurs in such vast herds as does the caribou. This gregarious creature of the wide-open spaces is equally at home on the tundra, taiga or in the boreal forest.

For centuries, entire cultures have relied on caribou as a source of food and clothing. An abundance of caribou meant feasts and good times, while a shortage meant famine and real hardships. Although traditional behavior often determined the migration routes and seasonal ranges used by caribou, the species was, and still is, no more predictable than the wind. 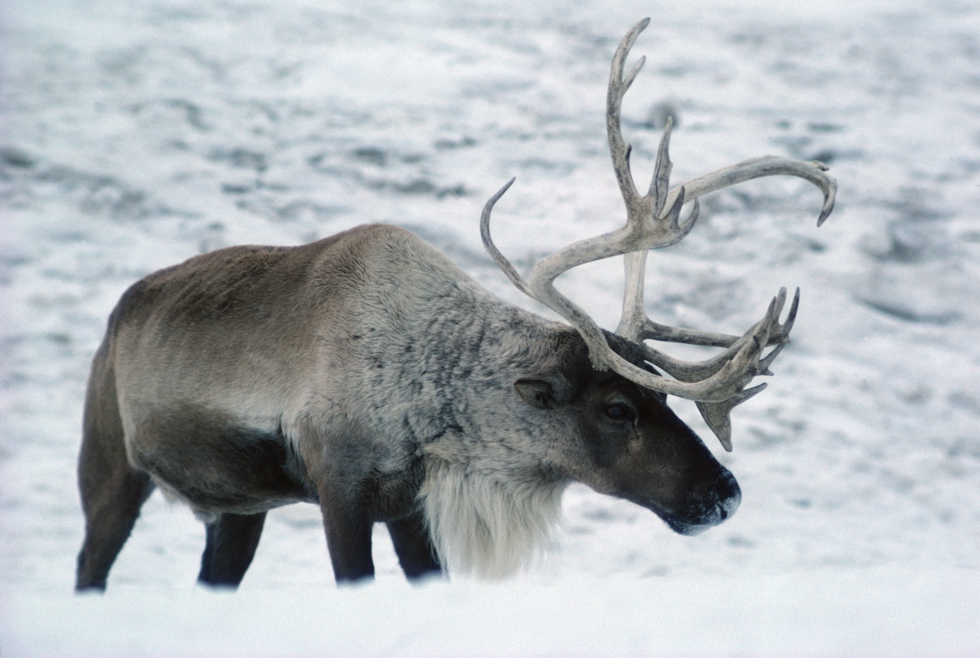 There are three subspecies of caribou in North America. The least plentiful is the Peary caribou–a small white animal that spends the entire year on the treeless tundra of the Canadian high Arctic. In contrast, the barren ground caribou is the most plentiful and the one forming the large herds that migrate each year between the tundra and the trees. The third subspecies is the woodland, or mountain, caribou. It does not form vast herds or make extensive migrations. Rather, woodland caribou spend most of the year in smaller groups that move between the boreal forest and open mountain habitats.

Caribou are the only deer in which both males and females have antlers. Antler shape varies greatly, and it is said that no two are the same. The large antlers typical of adult bulls are shed in early winter, while the cows keep theirs until calving time the following June. This allows the pregnant females to claim and defend the best feeding areas in late winter when they need high quality food to nourish their rapidly growing fetuses.

There are several important adaptations that allow caribou to survive, and even thrive, during the long and cold winters. To prevent excessive heat loss from its long legs, the caribou maintains two internal temperatures. Its body temperature remains near 105°F, while that of its legs is more than 50 degrees cooler. The caribou’s veins and arteries are closely aligned, like cables in a conduit, so that the out-flowing arterial blood transmits its warmth to the chilled venous blood returning from the limbs. Constriction of blood vessels in the extremities permits a flow of blood just sufficient to keep the legs from suffering frost damage, ensuring at the same time that little of their precious body heat is lost to the icy ambient air.

The caribou’s compact body is covered by a warm, hollow-haired coat that protects it from extreme temperatures. Even the muzzle, tail, and feet are well furred. Caribou hairs are club-shaped–thicker at their tips than at their base–and form a densely packed outer layer with myriad tiny air spaces near the skin and within the fine, curly under wool. In addition, the long guard hairs are filled with air cells. This deep-pile coat is so warm, it renders caribou virtually impervious to the worst Arctic weather. In fact, caribou are so well adapted to their Arctic environment that some scientists call them chionophiles, or “snow lovers.”

In addition, the large feet of the caribou act almost as snowshoes and help the animals to ‘float’ on soft snow; the characteristic clicking sound made by moving caribou comes from their tendons slipping over the bones in their feet. The broad, sharp-edged hooves easily break and clear snow when caribou crater for food.

Caribou have a keen sense of smell that they use for detecting danger, as well as for locating food under the snow cover. In fact, the name caribou comes from the Micmac word xalibu, meaning “the pawer,” which describes the animal’s habit of digging through the snow for food. In winter, caribou are the only animals that can live almost exclusively on lichen. In summer, their diet is more varied and includes forbs, grasses, sedges, and willows. Mushrooms also become a favorite with caribou when they are available in August.

Caribou are frequently seen along the coast during the summer. Here, they spend considerable time on the tidal flats in an effort to escape the ever-present black flies. With the approach of fall, the caribou, now sleek with fat from reindeer moss and other lichens, sedges, and marine plants, prepare for the rigors of the coming winter. Mating now occurs, with caribou calves being born during late May and June.

Biologists have named most of the major caribou herds after the geographical locations of their calving grounds. It is towards these remote areas in which they were born that the pregnant cows trek so urgently in spring. Accompanied by yearling calves, the females march 15 to 20 miles each day, probably guided across this vast and seemingly featureless land by clues and memories retained from past migrations. The bulls, which have no pressing date with destiny, follow far behind the herds of females at a more leisurely pace.

Once they reach the calving ground, the cows disperse. In the preceding fall, most females mated nearly at the same time, and now, in mid-June, most calves are born within a five-day span. This reproductive synchrony has great survival value; following the birth of the calves, the herds can quickly regroup and few stragglers are left behind. To caribou, there is safety in numbers.

While the nearly simultaneous birth of the calves has many advantages, it also exposes them to great danger as well. If during this vital, five-day period a late-season blizzard blankets the land, or worse, freezing rain drenches the calves’ fur, destroying their insulation, the just-born fawns may die. In favorable years, calves constitute as much as 25 percent of a herd, and less than 5 percent in disaster years.

Apart from man, wolves are a caribou’s main predators. Wolves are master strategists and have the ability to hunt as a skillful team. They can kill healthy caribou in a relay chase or cunning ambush, but they prefer, since it requires less effort and energy, to cull from a herd its most vulnerable and easily caught members–the old, the young, the weak and the sick; laggers and strays are also favored victims.

To many natives of the North, the inland Inuit of Canada and Alaska, and to such indigenous groups as the Chipewyans and the Naskapi of Labrador, the caribou once meant life. They ate its meat, dressed in its fur, and from its antlers and bones they made tools, toys, and weapons. The Naskapi, said explorer W.B. Cabot who visited them in 1906, were “lords over their fine country, asking little favor, ever, save that the deer (caribou) may come in their time.”

Once, the caribou may have numbered about three million. As recently as the 1940s, Canadian biologist C.H.D. Clarke said, “it is to be hoped that there will never be so few caribou that it will be possible to count them.” But soon, scientists were counting and recounting them, and each successive census showed more starkly the havoc wrought by uncurbed and excessive hunting. “In just ten years, between 1965 and 1975,” noted biologist George Calef, “Alaska lost over half its caribou.” The Kaminuriak herd of the Canadian North shrank from more than 150,000 in the 1950s to less than 40,000 now; other once-vast herds declined nearly as rapidly, victims of unbridled and often wasteful hunting.