Few animals make their home in the harsh environment of the Arctic. An exception is the Arctic fox, an adaptable circumpolar specialist. The size of a large house cat, the Arctic fox is one of the smallest mammals to remain active above the snow surface during the long, northern winter.

Wrapped in long, dense, silky-soft fur, Arctic foxes appear rounded and bulky in winter. But beneath this warm and voluminous coat lies a somewhat scrawny body, only weighing 10 pounds on average. Adaptations like short ears, legs, and muzzle, and thickly furred footpads, enable it to maintain its body temperature despite temperatures of –20°F and lower. Like other canines, the Arctic fox has a keen sense of smell and acute hearing. This combination helps it detect lemmings, a major food source, moving about under the snow. It is a better swimmer than other canines, an asset for an animal that lives on the coast and offshore ice. The Arctic fox has a characteristically high-pitched bark, and it has also been known to purr like a cat.

Arctic foxes are dimorphic, meaning that there are two color phases among them–white and brown. In both phases, the fox changes color from summer to winter. The Arctic fox is the only canine that undergoes this seasonal color change. For the white fox, by the beginning of July, molting reveals its brown and fawn-colored summer fur. About eight weeks later, the white winter coat begins to grow in again. Blue phase foxes are a dark bluish in summer and pale gray in winter. For reasons not yet understood, the ‘coastal’ foxes of such regions as West Greenland, Jan Mayen Island, the Pribilof Islands, and the Commander Islands are nearly always blue, while 99 percent of Canada’s ‘continental’ foxes are white.

Arctic foxes live both a communal and nomadic life, often forming small bands to scavenge the countryside for food. They do not hibernate during the winter months. Foxes also construct dens, often in cliffs at least a mile apart, which are inhabited by a family social group. This group consists of one adult male, the litter, and two vixens–one of which is a non-breeding female born the previous year that stays to help care for the next litter.

An Arctic fox generally makes its den in a low mound, 3 to 13 feet high, in the open tundra, or in a pile of rocks at the base of a cliff. These dens have between four and eight entrances and a system of tunnels covering about 323 square feet. Some of these dens have been used for centuries by generations of foxes.

The Arctic fox reaches sexual maturity in as little as 10 months. Arctic foxes are monogamous and usually mate for life, and mating typically occurs in February or March. Shortly after mating, each pair begins to search for a natal den, which will help to ensure the survival of their pups. But suitable den sites are hard to find, as permafrost must be far enough below the surface to permit burrowing. Births take place from April through June for the first litter, and during July or August for the second litter. The average gestation period lasts about 49 to 57 days, and the number of young per litter varies with the availability of food, especially lemmings.

The usual litter size is 5 to 8 cubs, although as many as 25 have been known to be born at one time. Blind, deaf, and toothless, a newborn pup weighs no more than a tennis ball, but it has a voracious appetite. The young are weaned at about two to four weeks of age, where they will emerge from the den. The male parent will stay with the cubs, helping to feed them. He then mates with the female again just a few weeks after the first litter is born.

Natal dens are usually abandoned by the end of August when the family splits up. Each fox then embarks on a solitary search for food. Hunting takes place from dusk to dawn. Even when the summer sun shines 24 hours a day, the foxes continue to hunt during the nighttime hours. The Arctic fox is an opportunistic feeder, eating practically any animal, alive or dead. Although it prefers small mammals, it will eat insects, berries, carrion, and even the stool of animals or human beings. Generally, its winter diet consists of marine mammals, invertebrates, sea birds, fish, and seals. In the summer, for populations living more inland, the diet consists mostly of lemmings. 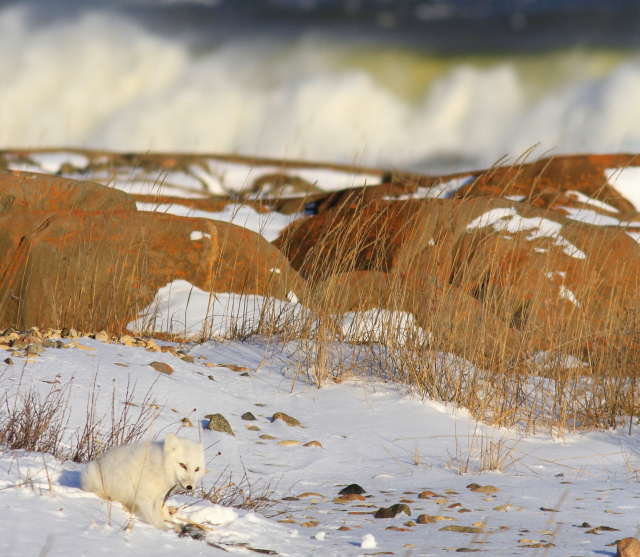 The provident foxes prepare for the long, lean winter by storing food during summer’s brief season of plenty. During the summer months, when food is much more readily available, the Arctic fox collects a surplus amount of food and carries it back to its den, where it is stored under stones for later use. Danish scientist Alwin Pedersen once found a fox’s cache that contained 36 dovekies, two young murres, four snow buntings, and a large number of dovekie eggs. “The frozen bodies of the birds were neatly arranged in a long row…and the eggs were heaped in a pile. The whole store would have provided food for a fox for at least a month.”

Arctic fox numbers rise and fall in a more-or-less regular cycle lasting three to five years. This cycle is related to changes in the lemming population. When food is scarce, foxes are known to migrate–some for hundreds, even thousands of miles.

– The Struggle For Survival

Arctic foxes have a high mortality rate. Parents frequently abandon their young, and aggressive pups are known to kill their littermates. In addition to starvation, rabies is a major cause of death in adult foxes. The virus for this fatal disease is found in up to 20 percent of the population. The incidence of rabies increases during the periods of food scarcity, presumably because of lowered resistance. Although the Arctic fox has a potential ten-year lifespan, only 1 in 25 will live past its fourth year.