WWF is the world’s leading conservation organization, working in 100 countries for half a century. With the support of almost 5 million members worldwide, WWF is dedicated to delivering science-based solutions to preserve the diversity and abundance of life on Earth, halt the degradation of the environment and combat climate change. Visit worldwildlife.org to learn more.

Tracking the King of the Arctic

Three researchers exit from a helicopter onto the sea ice of Arctic Canada and approach the lifeless polar bear. He’s not dead, just sedated from a dart gun the researchers shot from the air. They have an hour before he begins to wake up. They move quickly.

First they measure length and – with the help of a fold-up tripod, a net and an engine hoist – weight. Next they collect biological samples: a vestigial tooth, which helps determine age, along with blood, serum, hair, fat and feces to identify any toxic contamination. Then the researchers paint a big number on the bear’s back with temporary, biodegradable fur dye, so that he can be identified from the air in the near-future, and they give him an ear tag or radio collar so that he can be identified in the years to come. 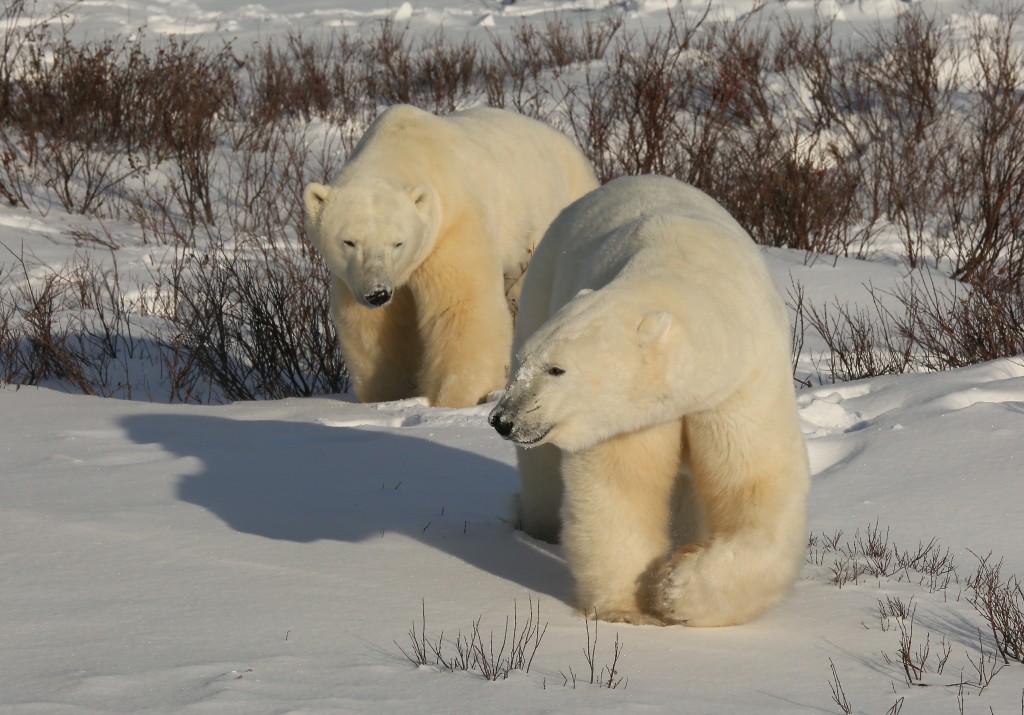 Polar bears are not currently endangered – 20–25,000 live in the wild – but the species’ future is far from certain. As a result of climate change, sea ice in the Arctic is melting earlier in the spring and forming later in the autumn, leaving the bears with less time on the ice to hunt for food to build up their fat reserves, and more time fasting on land.

Studies suggest that two-thirds of the world’s polar bear population could be gone by 2050. And if current warming trends continue unabated, WWF scientists and other researchers believe that polar bears may disappear altogether within 100 years. WWF is intent on preventing this from happening.

The organization and its partners are working to understand the impact of different threats. In addition to climate change, oil and gas development is a concern. By tracking polar bears, scientists can map a polar bear’s range and examine how habitat use may alter over time in response to changes in the sea ice. Over time this information reveals changes and adaptations. WWF also provides funding for polar bear researchers to travel to Russia and the U.S. to share and exchange scientific information about polar bears with other researchers.

As climate change forces polar bears to spend longer time onshore, they come in contact more often with Arctic communities. WWF is working to make sure these interactions do not end badly for humans or the bears. Learn more about WWF and their efforts to preserve the Arctic and polar bears.

Scientists believe that a natural ‘safety net’ of ice in the High Arctic of Canada and Greenland, ice covering 500,000 square miles, or twice the size of Texas, may persist longer than the ice anywhere else. WWF and its partners are working to preserve this region while simultaneously negotiating with governments, businesses and individuals to reduce greenhouse gas emissions that are causing climate change.