The mighty polar bear is widely considered the most intriguing and awe-inspiring of all animals. Even the region that he rules takes his name–the Greek word, arktos, actually means bear. It is because of this amazing animal that we travel to the small grain port of Churchill on the western coast of central Canada’s Hudson Bay, and what we find in this town of nearly 1,000 people is most certainly the wildlife jewel of the Arctic region.

When the long summer days arrive, the tundra surrounding Churchill, as well as the waters of the Hudson Bay, become home to a wide variety of Arctic wildlife. Beluga whales, caribou, Arctic fox, and nesting shorebirds and seabirds spring to life in the blossoming and food-rich area. But in the fall, the frosty surroundings and local animal inhabitants make Churchill the “Polar Bear Capital of the World.”

Every fall, the tundra at the shores of the Hudson Bay becomes a stopover for more than one thousand bears on their annual migration to the pack ice. Polar bears live mostly solitary lives, and spotting them individually on the ice can be a monumental feat. However, in Churchill at this time of year, we have the incredible opportunity to see large numbers of them in a relatively small area. Indeed, there is no other place on earth where humans can see so many bears with such ease and safety. 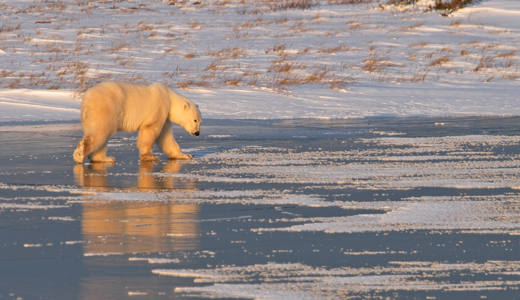 When Hudson Bay freezes over, the hunt is on. Colin McNulty photo.

At one time, the unavoidable confrontations that occurred between man and bear almost always resulted in the destruction of the animal. But now, with increased tourist interest and a new awareness of the importance of conserving the bears, the people of Churchill are committed to helping these great animals migrate safely through their now-famous town. Our Polar Bears of Churchill expedition offers animal enthusiasts, photographers, and adventure travelers the rare opportunity to visit with some of the world’s most extraordinary creatures, as they live, wild and free, in their own natural habitat. 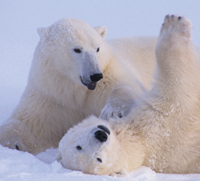 The image we have of solitary polar bears wandering alone across the frozen expanses of the North is not necessarily accurate. Sometimes two bears, usually males, will form “friendships” that last for weeks, perhaps years. The bonded bears may feed and travel together, or even form “play” groups. As a rule, only fat bears play. Fred Bruemmer, in his 1984 article “How Polar Bears Break the Ice” in Natural History, eloquently describes the bears’ play behavior:

“A bear that wishes to play slowly approaches another suitable male, and the two begin a massive, slow-motion minuet. They circle and sniff, their heads low, mouths closed, eyes averted, and they are silent, signaling by attitude and posture peaceful intent and mutual respect… They ‘mouth’ each other with jaws wide open or chew gently at each other’s necks like horses grooming each other. One places a paw upon the other’s shoulder; they rise and spar and push, lose balance and embrace, sway and wrestle. One topples and lies on his back, huge paws pedaling in the air. The other bear, with jaws agape, throws himself on top and they romp on the ground, then rise and wrestle again. Considering their awesome power, the bears practice marvelous restraint and are extremely careful not to hurt each other. Each bout lasts about 15 minutes. Towards the end, both bears are panting so loudly that they can be heard a hundred yards away. Hot and exhausted, they move apart, stretch out on snow or ice like a rug-to-be, gulp snow to cool their overheated bodies, and rest awhile.”