In Churchill every season is polar bear season. True “Churchillians”..er, that is “locals”…never stop thinking about polar bears. It would be truly unwise to do so. A constant guard has to be maintained living in this frontier town. Other than the heart of winter, one has to be alert to surroundings 24/7. For all others, October and November signify a gathering, not just of bears, but of people. Travelers  also migrate to the north..Churchill…to become a part of this amazing phenomena known as “polar bear season”.

In about two weeks Churchill will begin to feel the stir of this year’s polar bear season. The town will transition from the lull between Summer and the frenetic pace of the busiest time of the year. For this town of about 900 residents, the world will be watching. Thousands will converge upon this tiny town on the shores of the Hudson Bay and the one main street running through the heart of town..Kelsey Boulevard. The town will become an incredible melting pot of people and wildlife for two months and then stillness.

Here are some of my favorite, classic images from recent years in Churchill! 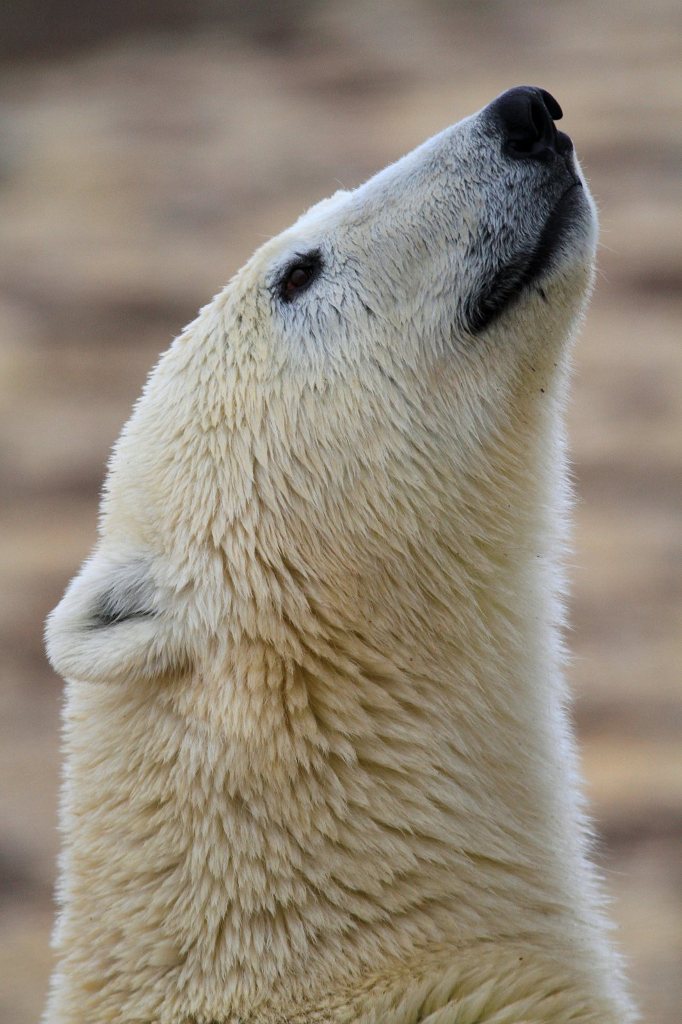 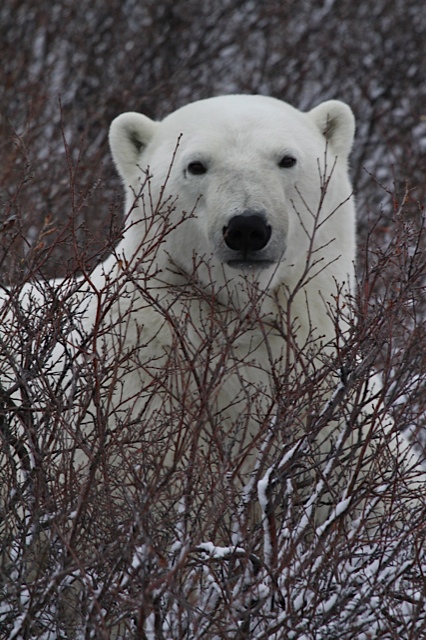 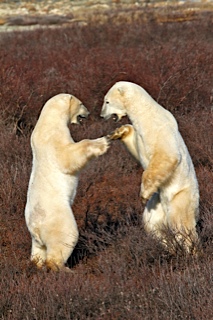 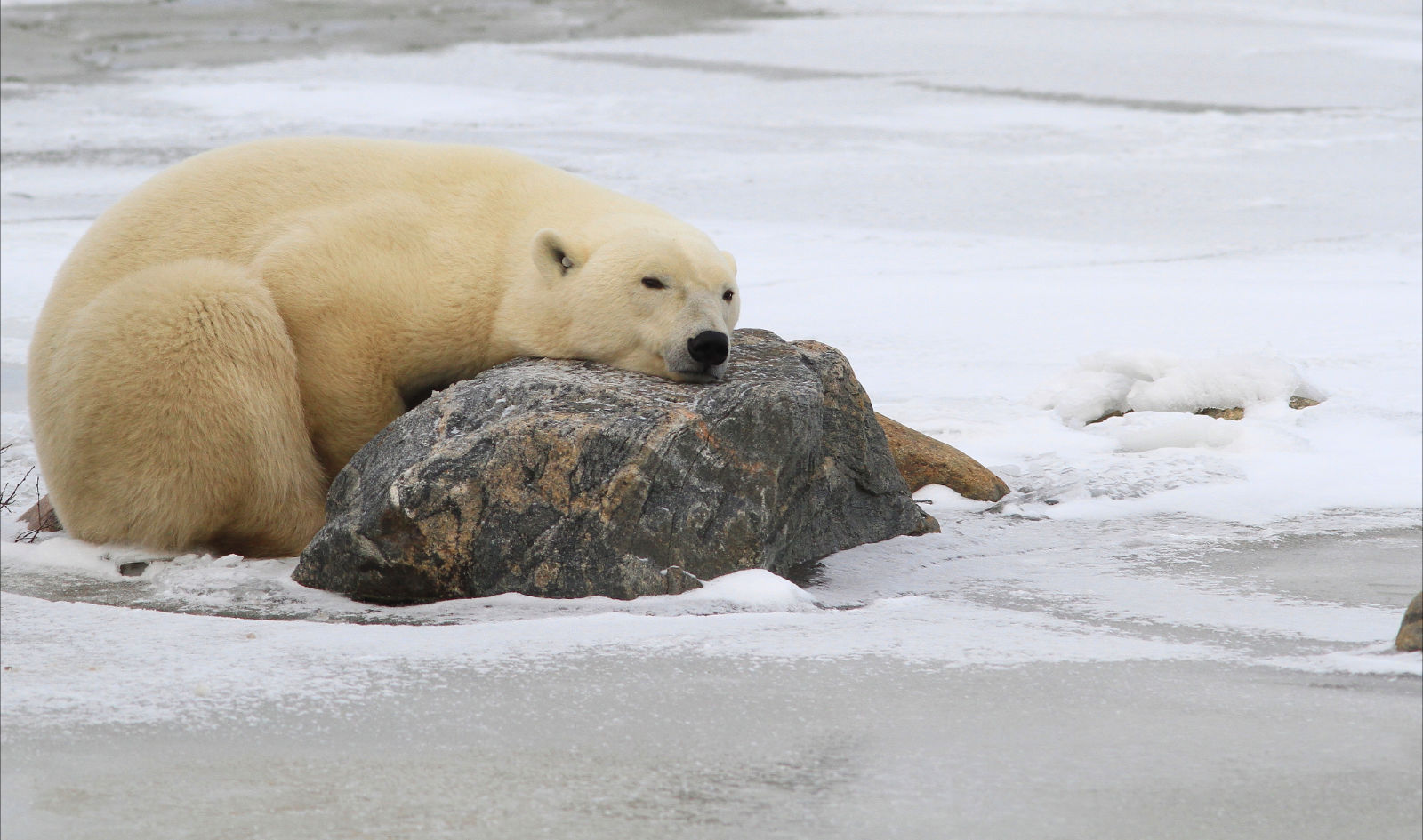 The Manitoba Conservation department has found encouraging signs that the Southern Hudson bay polar bear population may be in better shape than some skeptics think….. a prodigious number of polar bear dens situated along the Hudson Bay coast near the Ontario boundary.

The dens were located in the southeast of Wapusk National Parc and east of the Nelson River.  This area lies at the southern end of the polar bear’s range and is less famous as Wapusk National Parc which is adjacent to the Churchill region. Wapusk has long been known as the number one polar bear denning site in the area and in fact most of Canada. I have had the unique pleasure of crawling inside a den that had been vacant for a number of years. Quite a thrill!

“We’ve always known that there are dens in there … but not to this extent,” said Daryll Hedman, the regional wildlife manager for northeast Manitoba.

“We have a fairly large number of denning females in there, equal to or even maybe surpassing Wapusk National Park, so it’s fairly exciting news.”

Female polar bears dig the dens in the ground to give birth. The discovery could be a sign that the polar bear population in the area is in good shape, at least for now. The province is beginning a three-year study to get more detail. The Hudson Bay polar bear population is threatened by a shrinking number of ice coverage days leading to less time feeding and building up fat reserves for Summer on land. The amount of ice coverage days has been cut down by a period of up to two weeks going back over the last two decades. Bears still seem to be surviving and even possibly adapting to the lack of ice with new hunting techniques. Over the last two years, in the time leading up to and even during Churchill’s prime polar bear season in October and November bears have been observed with fresh seal kills on land in the shallows where seals tend to get trapped by the tide at times. Resourcefulness is the key to survival in the Arctic. 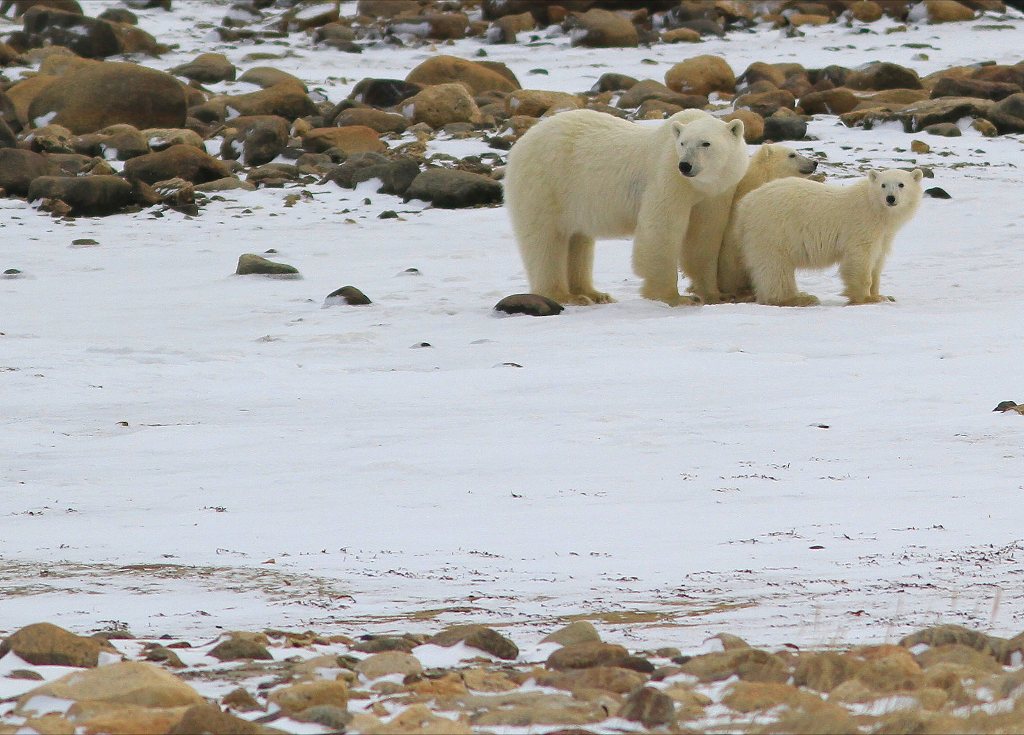 The lack of food makes the females job of giving birth that much harder. They spend even less time on the ice then the males due to their time in the dens. They have to rely heavily on fat reserves to get them through the Winter.

Climate change is also affecting the permafrost the bears use for their dens. Dens do not collapse under permanently frozen ground, but scientists are worried warming temperatures will cause the permafrost to recede northward. This might limit the territory needed to have a healthy denning environment as polar bears are quite territorial.

Not everyone agrees that polar bears are in trouble. The Nunavut government released a survey earlier this year that said Canada’s Hudson Bay polar bear population hasn’t significantly declined in the last seven years as predicted. An aerial survey estimated the western Hudson Bay bear population at around 1,000…roughly equivalent to the number of bears found in a more detailed study done in 2004. That study, which physically tagged the bears, predicted the number would decline to about 650 by 2011. Somehow, despite the increase in ice-free days, the polar bears are seemingly keeping a stable population in the Churchill region.

Check out this image of two bears in the Hudson Bay. Now that’s the authentic polar bear dip. Although not common to capture photo’s of polar bears in the water around Churchill, every once in awhile you can be at the right place at the right time. When the ice starts to melt in the Spring, bears can swim miles to land and a resting area. It is a magnificent feeling to watch a bear slowly move through the water and come ashore. Hard not to get the chills when observing these creatures in 42 degree F water!