Arctic Photo of the Week-Egg Hunt 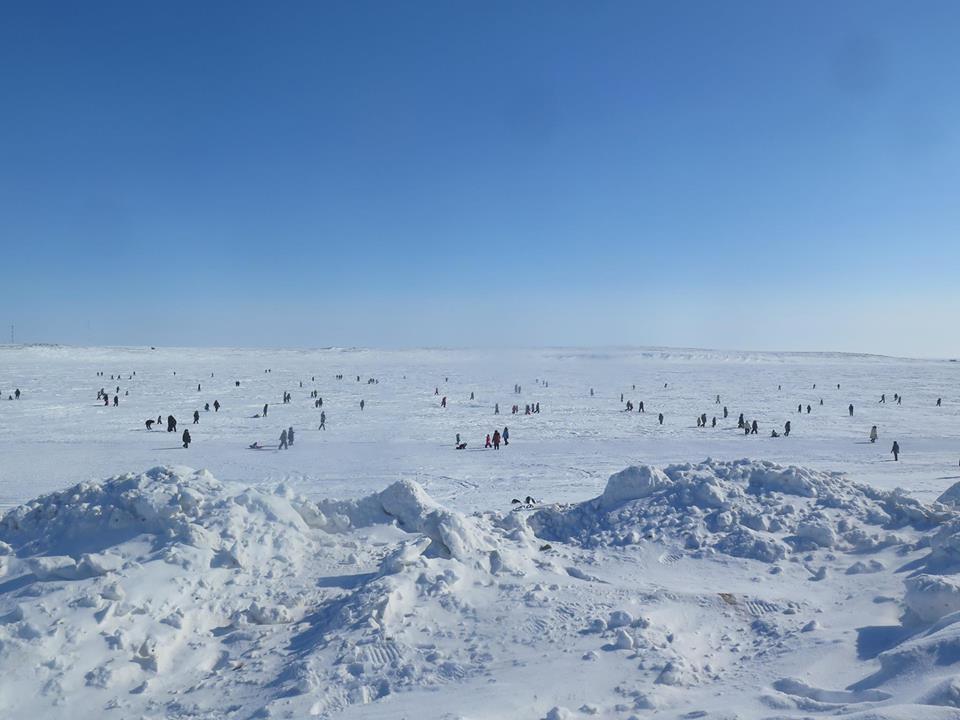 This Easter egg hunt on the frozen Arctic Ocean at Cambridge Bay, Nunavut will make all other egg hunts across the Earth pale in comparison. What a way for the kids to celebrate Easter! I’m sure there were many polar bear monitors around as well!

Robert Kautuk, from Igloolik, Nunavut, captured this awesome drone footage of walruses swimming and interacting in the Arctic Ocean! Drones have opened up a whole new world of wildlife viewing in areas that are remote and less accessible for conventional video photography. It would be amazing to see some footage of polar bears on the Hudson Bay ice – pack searching out seal dens. Enjoy this excellent video!

Acclaimed Italian composer and pianist Ludovico Einaudi performed “Elegy for the Arctic” near the Wahlenbergbreen glacier in Svalbard, Norway to bring attention to the pressing global warming issue. Einaudi played on a baby grand piano on a floating platform as a glacier crumbled into the water around him. Greenpeace shipped the piano to the region from Norway on their ship the Arctic Sunrise.

Greenpeace sponsored the event in conjunction with OSPAR Commission meeting in Tenerife, Spain this week to make crucial decisions toward preserving the Arctic regions. A proposal to protect 10% of the Arctic ocean will foremost on the agenda. – OSPAR is so named from the original Oslo and Paris Conventions -“OS” for Oslo and “PAR” for Paris- that initiated the movement of protecting the Arctic.

“Being here has been a great experience. I could see the purity and fragility of this area with my own eyes and interpret a song I wrote to be played upon the best stage in the world,” Einaudi expressed via news release from Greenpeace. “It is important that we understand the importance of the Arctic, stop the process of destruction and protect it.”

Voicesforthearctic.org, is the website built by Greenpeace dedicated to the issue. Please help in protecting this fragile and pristine ecosytem and environment.

Polar bear on the outside trying to get into the ship. Kyrakos Kaziras/Rex photo.

Wildlife photographer, Kyriakos Kaziras aboard an adventure cruise near Spitsbergen,Norway received some thrills when a polar bear approached and then attempted to board his ship cruising through the sea ice in the Arctic Ocean. His passion for capturing images of wildlife became slightly risky when this particular bear reached in through the grated port hole and swiped his paw at Kaziras. Quite the thrill. In my extensive time in Churchill I have experienced similar situations while attempting to photograph the wiley polar bears of the polar bear capital.It is thrilling and terrifying in the same moment!

It’s somewhat routine for polar bears to approach passenger ships in the area when they spot the large vessels from afar. They venture toward them to investigate and even smells from the ships may also draw the bears nearer. Most polar bears stay a safe distance from the slow moving ships however this one had no hesitancy at getting as close as possible.

Polar bear against the ship as it crawls through the ice of the Arctic Ocean. Kyriakos Kaziras/Rex photo.

For more than two hours this bruin attempted to find a way to get aboard the boat. At one point he climbed atop a large pressure ridge in the ice and was level with the open deck of the vessel. “Eventually the bear managed to climb on a small iceberg, and ended up next to us, at the same height. At that moment he could have easily jumped into the boat. It took all the experience of our captain and an emergency maneuver to get us out of this mess and away from the bear.”  If the bear had found a way to board the ship the exciting adventure might have ended tragically for passengers or the bear!

Polar bear climbing a pressure ridge in attempt to board the boat. Kyriakos Kaziras/Rex photo.

Polar bear literally “chomping at the bit” to get aboard the ship. Kyriakos Kaziras/Rex photo

Exclusive video from the Arctic Ocean in Queen Maud Gulf shows Franklin expedition lost ship Erebus for the first time since the ship went down in the 1840’s. Sir John Franklin and his two ships, the Erebus and Terror, met their demise when they were trapped in ice in 1846 off King William Island near Nunavut according to Inuit legend. With hopes to find the Northwest Passage vanquished the surviving crew abandoned the ships and set out on foot pulling one of the life boats across the icy land. Stone marked graves of three of the ship-men were discovered earlier. This is the first tangible discovery since of the lost expedition.

Diving through the two-meter thick ice has proven to be very beneficial as the ice has eliminated any turbulence from waves above. This setting has allowed for clear water as silt has settled on the ocean floor.

The Erebus was discovered last summer though rough seas forced the crews to abandon the expedition until the ice provided the current ideal conditions. Searchers will continue the quest to find the Terror this summer.

If you are thinking of visiting Churchill where the buzz of the discovery is peaking like the rest of the north, make sure to visit the Anglican church and see the Lady Franklin stained glass window. Keep posted for more updates!