Beluga whales are naturally curious and friendly toward humans in boats and kayaks. Recent pressure from Canada’s Department of Fisheries and Oceans to enforce restrictions on approaching beluga whales as well as distance restrictions of 100 meters were met with frustration and anger from local tour companies. This video shows the gregarious characteristics of the belugas. Enjoy!

When it rains it pours on the battered town of Churchill. Prime beluga whale watching season in Churchill has brought new threats from the Department of Fisheries and Oceans (DFO) to enforce federal rules restricting tour boats and kayakers to remain 100meters from the animals. This on top of the ongoing saga of the non-operational Hudson Bay rail line have spirits in the northern outpost at an all-time low. Throw in soaring prices for groceries and fuel over $2.50 per litre and the outlook for the near future is grim.

Whale watch tour companies in Churchill fear the new regulations and the absence, at least for the foreseeable future, could place stress on their livelihoods and in the worst case scenario, force them to shut down. Fuel costs as well have raised overhead already.

Each Summer, more than 60,000 beluga whales and their young migrate to the southern Hudson Bay coastal waters and infiltrate the freshwater estuaries like the Seal and Churchill Rivers. These accessible pods of mystical beings are easily approachable via zodiacs and larger observation vessels.

With travelers coming from near and far to get a close up look at these marine mammals, business is built on the summer numbers being high. No train and no close-up viewing will hit these small operators hard.

DFO has attached fines of $50,000 to $500,000 dollars for breaking the rules which with one ticket alone could literally mean the end of the road.

The only light at the end of the tunnel or on the horizon is the loophole in the wording of the mandate. It states that boats cannot pursue whales though whales can come to the boats without penalty or risk of fines. In my 10 years experience on the Churchill waters, this happens 90% of the time. DFO is worried mainly about boats approaching whales at a quick pace or feeding sessions as well as nursing calves. However, belugas move at their own pace and tend to keep their distance from and boats while engaged in these activities.

“As soon as we take our boats out on to the water we are literally flogged by whales, we would actually have to drive away from them to make these amendments applicable,” said Wally Daudrich, who is with the Churchill Beluga Whale Tour Operator Association.

DFO is confident that these restrictions, that most likely will be loosely enforced due to the remoteness of Churchill, are not intended to harm businesses.

“We’ve established these distances based on the best available science around what distance would lead to the lead to the whale being disturbed,” said Adam Burns, who works in fisheries resource management at Fisheries and Oceans Canada.

Oceans North marine biologist Kristin Westday maintains that Churchill’s whales are thriving, stating that eastern Canada and the west coast have struggling populations. She states that there is no evidence the tours are harming the belugas.

“Let’s prepare for the future. So should there be oil and gas that’s something we need to step in front of. Let’s enforce those rules, no oil and gas,” said Westdal. 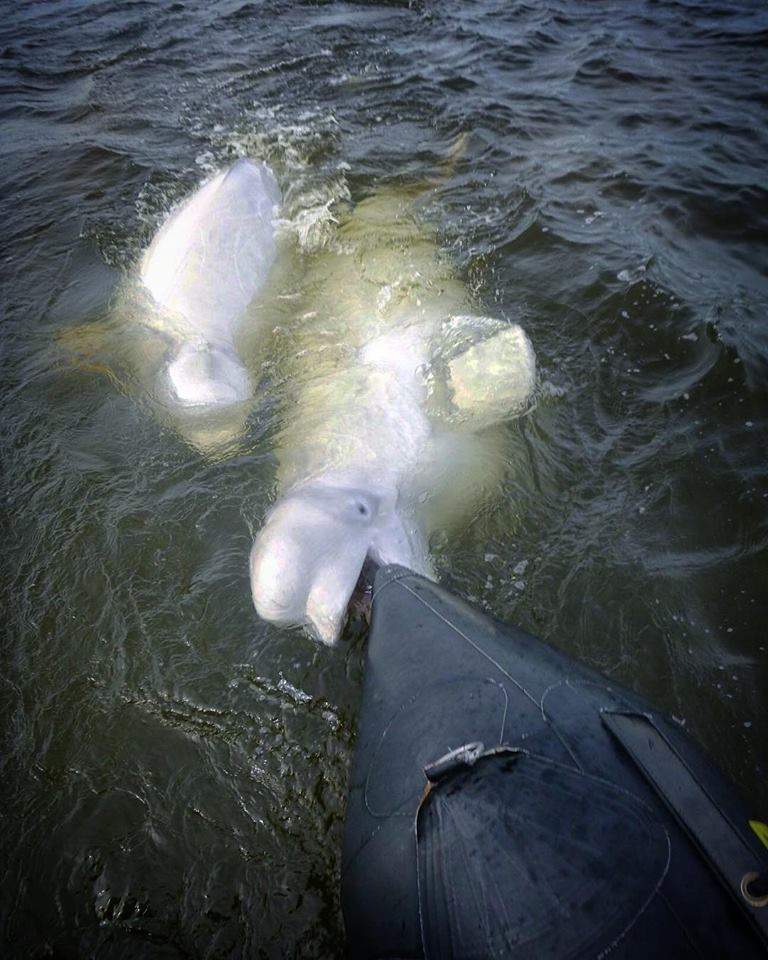 The beluga whales of the Hudson Bay and particularly the Churchill River estuary are extremely curious marine mammals that love to troll along with the zodiacs. Rarely do they try to take a chomp at the fine Italian rubber that forms the boats but this guy had some craving I guess. Beluga season in Churchill always brings new surprises that you never expect to see….looks like this one has more in store for us all!

Hearing beluga whales communicating in the water of the Churchill River and Hudson Bay around Churchill is one of my most lasting memories of my tenure as a guide for Natural Habitat Adventures. Nothing in nature, in my opinion, compares to witnessing animals communicating with one another and if you spend enough time with beluga whales you will hear them and see how they act as a group and coordinate their actions as apparently one organism. This short video gives an impression of what you can expect to witness as a traveler on a spectacular Churchill Summer Adventure! Enjoy!