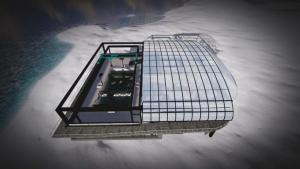 Yesterday, in Churchill, Shelly Glover, Minister of Canadian Heritage and Official Languages and Minister responsible for Manitoba, along with Manitoba Premier Greg Selinger announced the future construction of $31.7 million marine research facility, the Churchill Marine Observatory, in Churchill. The facility will be located adjacent to the Port of Churchill which is Canada’s sole Arctic accessible deep-water port.

Apparently the main focus of the Churchill Marine Observatory will be a facility for researchers to study discovery, impact and mitigation of oil spill disasters in sea ice regions within the northern Arctic and subarctic regions. The observatory will also study issues encompassing present and future Arctic marine transportation. Climate change and sea ice shifting has created new possibilities for shipping in the northern regions. Canada and specifically Churchill will be strategically positioned globally through ongoing study of the scientific and economic issues that pertain to Arctic marine transportation with regards to oil and gas exploration.

Researchers from major Canadian universities, University of Washington and Canadian federal government departments will come together through this new facility. Saltwater subpools and an environmental observing system constructed on the Churchill estuary will allow scientists to study actual conditions and complications of oil spills in Arctic seawater and sea ice. Overall, hopes the project will strengthen Canada’s capacity to protect the environment in the Arctic.