The Hudson Bay Quest will begin this year in Gillam, Manitoba on March 13th, 2015. The mushers will sled 271 kilometers north to Churchill, Manitoba. 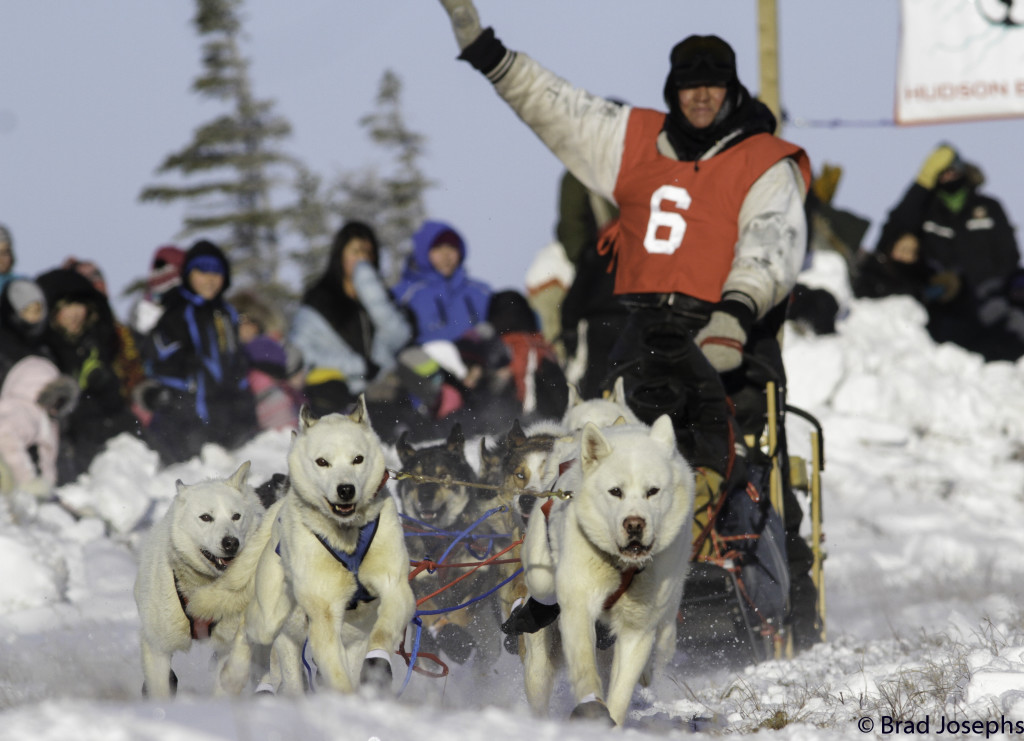 Looking over the 2015 musher roster one finds mushers from Churchill. Maybe this will be the year a local musher brings home the crown. Here’s a look at the Churchillian contingent of mushers registered at the moment:

The following story is from Churchillian Rhonda Reid whom has been working with Natural Habitat Adventures in Churchill for many years now. Rhonda has been gracious to be a local “correspondent” for churchillpolarbears.org over the past few years and this story is a great one. You never know what’s around the next corner…or snow-bank in this instance. Visiting Churchill to see the aurora can have unknown effects on one’s soul.

If you have a story you would like to share about travel in the north/Arctic send it in to the site or to steveselden17@hotmail.com and we will share it with others here. And, if you’re interested in becoming a volunteer at the Churchill Northern Studies Center, here’s the link to find out how: Volunteer.

“I like a lot of the people that I meet through my job,… if you’re reading this and I met you through Natural Habitat Adventures then no doubt you are one of those people. I have a guest on the trip I am working on now and she is just so excited to be here. A former teacher, she is quickly becoming one of the people I like. Today we went to the Churchill Northern Studies Centre and she was just being her fabulous self when she fell into the fulfillment of a life long dream. The Studies Centre is short a volunteer and my guest is available and excited about a chance for a new temporary “job”.
When she first started talking to me about it and we broadened the conversation to the point this could just possibly happen, she became more and more excited. When she was introduced to the executive director Michael Goodyear he thought that she was kidding. I’m sure Mike hears this all the time though this time it took this very intelligent man only a few seconds to realize that he was probably speaking to his new volunteer. Local Churchillian Kim Daley recommended her for the “job” as did the one of the center’s current volunteers she had contact with, and I, as you can imagine added my two cents as well.

I went to meet them for dinner tonight and she was so excited to tell me that she “got the job!!!!”
She signed on for a five- week stint at the Churchill Northern Studies Center as a quite excited volunteer. Washing a lot of dishes and helping to serve a lot of meals will surely be a big part of the position, while living a dream she didn’t really know she even had. The idea that there’s a place where you can work for a bed, three really good squares and a night sky holding a good possibility of a natural light show like no other, never occurred to her.

Aurora over the “aurora domes”, a prime indoor spot to photograph the lights. Photo Brad Josephs.

The adventure began at the end of her Natural Habitat trip….or actually started at the beginning of her trip…well I guess this experience became all one in the end. I’m sure that Natural Habitat will lend her the coat on her back and be sure that she is properly geared up for the cold days ahead. Being from Florida there will be more to the traditional culture shock travelers experience being in a vastly different culture. Here in Churchill temperatures in the winter provide shock even to seasoned locals.
The word of the day from my guest is Serendipity.

No skinny bears in sight

I read an article on the internet about a polar bear that had died in Svalbard and the propaganda being put forth about global warming was nauseating. Not that I don’t believe global warming is in fact truly occurring …but one dead polar bear can ,in no way, verify that truth. Nor can one colder than normal winter substantiate the claim that global warming is a hoax.

The photo and story of the “bear rug” as it was described accurately, was supposed to accentuate the pro-warming angle being plead by many. One starved polar bear “bearing” the torch for the global warming crusade. Somewhat slanted journalism in my opinion.

I am an proponent of the global warming theory and I respect the many scientific -based organizations that put forth the growing evidence of sea – ice loss and warming trends in our planets climate. I feel ,however, that at times we try to hard to persuade the nay-sayers with unfounded propaganda that turns people away from the cause of protecting our planet.

For the time being let’s just enjoy the fact that many bears arriving on -land in the southern Hudson Bay are healthy polar bears ready to wait out the freeze -up a little more comfortably this fall. Apparently the sky is not falling..just yet. Check out these rather plump bear photo’s taken just a couple of days ago by Churchillian Jody Grosbrink.