Check out this awesome and rare shot of a seal mom and pup under the ice near their den. Voracious polar bears spend the winter months searching the ice pack for these animals and spend countless hours just trying to track them down. Pat Qulaut got lucky and snapped this sweet photo near Igloolik out on the ice! The far north provides incredible views into nature’s realm.

A very rare sight to see an airlift this time of year of a mother and cub polar bear out to the ice pack. The immense amount of snow has even made travel for polar bears difficult. Mothers and cubs can emerge from their dens in March though most families are spotted further east around Wapusk National Park. This polar bear family ended up somewhat stranded in Wapusk Adventures sled – dog yard instead. Quite the happenings in Churchill this time of year!

With the south winds blowing the ice – pack away from the southern Hudson Bay coast, there are still some polar bears around Churchill at this late juncture. These three polar bear family pics were taken by local photographer Karine Genest and featured by Polar Bear Alley, a long – time Churchill blog site. While we are still enjoying all the bonus polar bear coverage from the north, we are hoping that the ice returns and covers the bay soon. Just like your local pee-wee hockey team, these hungry animals need ice – time albeit for different end “goals”!

A sow polar bear and her two cubs relaxing near the Hudson Bay. Karine Genest photo.

This pretty cool photo taken at the 82nd parallel just at the edge of the ice pack in the Arctic Circle. Photographer Josh Anon was in the right spot to catch the sun’s angle in the polar bear’s breath. The bear was one of a group holding court over a recent seal kill as Anon snapped the shot from a small boat. The polar bears lingered through the night and the group was able to spend some more time capturing their images in the early morning light. 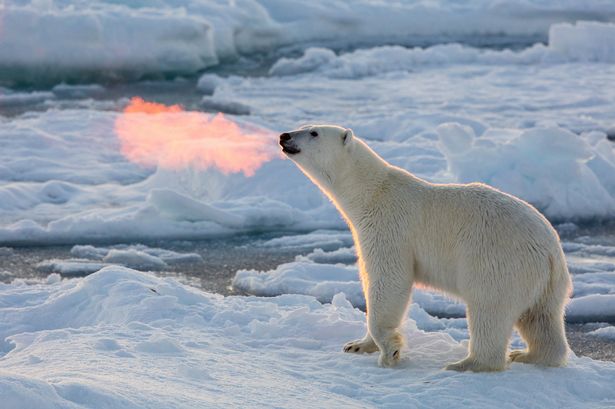