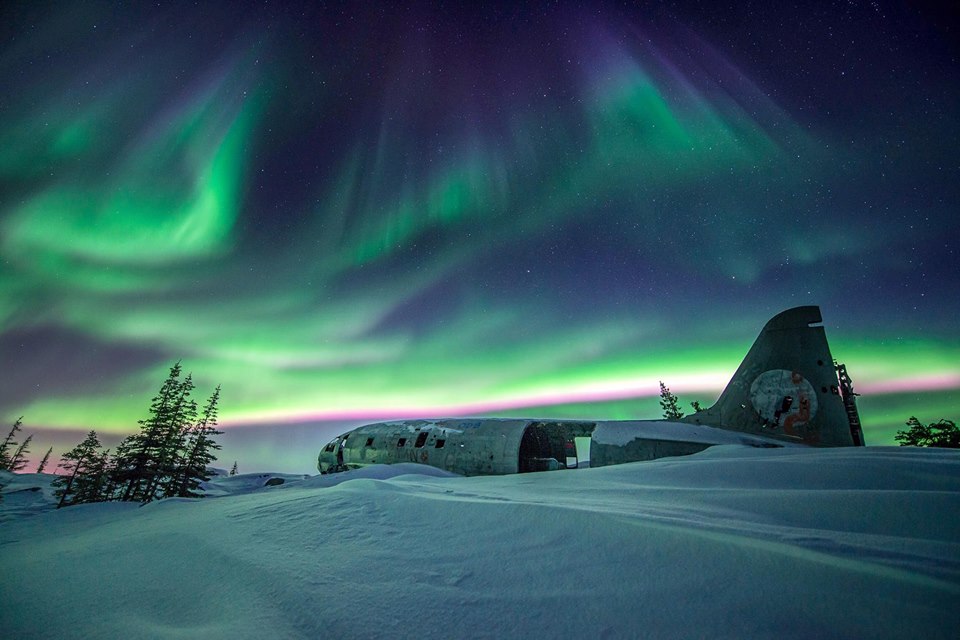 The icon of Churchill that is dubbed “Miss Piggy” is photographed year-round with various conditions providing the backdrop. This surreal northern lights image by Alex De Vries – Magnifico just a week ago shows another way to highlight the aurora borealis in Churchill. Enjoy!

Snow and cold descends on Churchill

When Natural Habitat guide Karen Walker and group arrived in Churchill this past week they found clear blue skies, no wind and calm waters. That scenario is changing as this post is being published. For all the polar bear watchers out there that is good news. As many travelers do upon arriving in Churchill, the group followed the coast road out around the inlet across from Miss Piggy taking in the amazing Hudson Bay vastness. Arriving back in town they stopped at the large Inukshuk on the beach behind the town complex for another view out over the calm bay slapping waves against the shore. After lunch ,desserts and a taste of local flavor at Gypsy’s, they checked into the hotel and headed over to Parcs Canada Visitor Center for an orientation to the polar bear world and regional geographic and cultural features. Karen added her orientation thoughts to a fantastic presentation by well-known Raymond’s from Parcs presentation. Peter and Mary rounded out a full afternoon of northern exposure!

After dinner, stars were in the northern sky so the avid bunch headed out behind the complex once again to find a faint arch or northern lights fairly low on the horizon.  It was a nice evening along the shores of Hudson Bay.  About 45 minutes later, the arch brightened significantly and began to form a swirling motion seemingly mimicking the counter-clockwise currents of the tumultuous Hudson Bay. Nothing can match the experience of these lights of the north!
As morning came the group headed to the tundra and immediately spotted a pair of ptarmigan in the willows heading out to the lodge.  Four bears were in the area and soon after arrival some sparring ensued just off the tail end of the rover.  “We had a bear come up to our rover.  Then we headed out the point a ways and watched a couple of bears wander off into the willows along the ponds.” reported guide Karen.  ” I gave an intro to polar bears, then suddenly one, no two bears, appeared from the willows & headed right toward us.  We were visited by the bears & had them under the deck.  They never stood up on our rover or sniffed the deck, but it was still awesome to look them in the eye.” Another unforgettable memory.

Once the two polar bears headed off, lunch was served. just as most had finished, they appeared again.  Perfect timing! With beautiful views of the colorful yellow and red tundra the bears lingered near the rover during the morning as big snow flakes started to fly … some even found their way into the rover when the windows were down. A preview of the imminent snow in the forecast. On the trip back to launch-site, a offshoot voyage to Halfway Point provided an amazing view of a puffy, white snowy owl. What a way to complete an incredible day in the CWMA.

The group staying on the tundra lodge with guide Rinnie had incredible sparring after some docile, napping bears the first couple of days. The sunlight accentuated the movement as the bears grappled right next to viewing platforms. Later as the rover ventured  away from the lodge, a sow with two yearlings – first sightings of the season- came right up to the machine two different times. With no other rover in sight, this encounter made the trip for many of the guests. Back at the lodge in the evening…stellar aurora borealis graced the skies above…a perfect day and night on the tundra lodge.

Guide Elise and her travelers were near the lodge most of that same day as the wind blew snow squalls sideways. Sparring bears continued to battle while taking rests and then resuming nearly all day. One bear had an injured claw and spewed blood on white fur adding to the drama. Exciting action as the snow moves in across the region.

Bonnie Chartier spends most of polar bear season out at the tundra lodge with travelers eager to get amazing round the clock views of polar bears. However, Bonnie also is one of the premier experts on Arctic birdlife. She has literally written a book called “A Birders Guide to Churchill ” and continues her research on the numerous species that call Churchill home for all or part of the year. Here’s her report of sightings out in the Churchill Wildlife Management Area (CWMA). Some of these species have most likely made their way south by now..but for the birders in the crowd here’s the skinny:

“In the past few days we had at least 6 different Snowy Owls. Also well photographed was a single white Gyrfalcon.  Rock Ptarmigan are being seen in good size flocks. Shore birds include Pectoral Sandpipers, Dunlin, Black-bellied Plovers.  Snow buntings are still around in good numbers.  There are Canada Geese, Common Eider, Long-tailed Ducks and a few Red-breasted Mergansers still hanging about.  I saw only one greater Yellowlegs. “

If there are any species still out on the tundra Bonnie will find them. Stay tuned for another mid-season update!