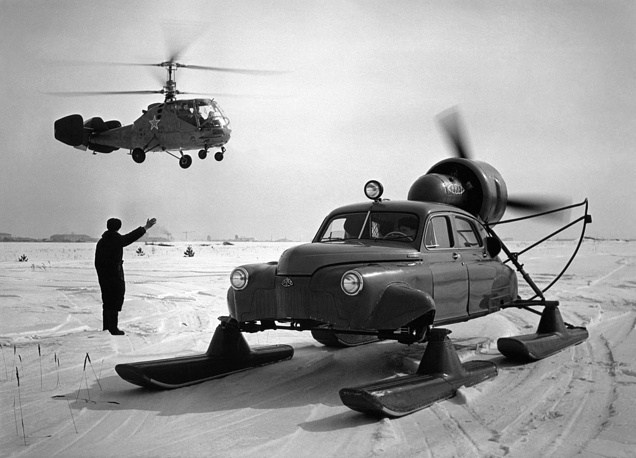 A Russian built snow vehicle from the 1950’s. A snowmobile prototype. TASS photo.

Russia has been active at exploring and settling the Arctic for many decades. This is one of the earliest vehicles to transport people in the area and  quite the relic. How fun would it be to zip around the snowfields in this little number? These are not too far off from the original polar bear viewing vehicles from Churchill. The huge propeller fan on the back might be a deterrent for polar bears however!

Old Yakutian cemetery where the deep thawing has exceeded one meter. Array photo.

This is something global warming proponents could not have predicted when temperatures began to rise faster than expected in the Arctic. Is it possible that a disease that has been eradicated from the world could reemerge again?

Scientists from Russia are worried that deadly diseases such as smallpox and anthrax could be released back into the human population via the thawing of ground covering Arctic graves in a report released by The Sun UK. An anthrax outbreak in the Yamal peninsula last year caused the death of one child and nearly 2,500 reindeer. Thawing reindeer graves is blamed on this particular outbreak and was fairly harmless to people though the fear that smallpox could be released in the same fashion is now prevalent.

Disinfection of the territory in the area of anthrax outbreak in Yamal. Siberian Times photo.

Russian scientists are concerned that smallpox could be released from Arctic graves in Siberia where thawing is occurring three times faster than usual. Climate change is the driving factor behind the melting scientists argue.

The primary concern stems from an 1890’s  smallpox epidemic that killed almost half the population in eastern Siberia. Boris Kerhengolts, Deputy Director for research at the Institiute of Biological Problems of the Cryolithozone in Yakutsk, issued a concerning statement; “during the 1890s, a major epidemic of smallpox occurred in a town near the Kolyma River in eastern Siberia, and up to 40 percent of the population died. Their bodies were quickly buried under the upper layer of permafrost soil. A little more than 100 years later, Kolyma’s flood waters have started eroding the banks.”

Mikhail Grigoriev, Deputy Director of the Permafrost Studies Institute, says “The rock and soil that forms the Yamal Peninsula contains much ice, melting may loosen the soil rather quickly, so the probability is high that old cattle graves may come to the surface.”

Dangers other than smallpox and anthrax might be released from the shallow Arctic graves. Increased melting will possibly unveil centuries – old dangers in the near future.

Russian scientists were held captive on a small island off eastern Russia after they exhausted all their non – lethal flares and air horns. The group of five researchers had to endure two weeks of captivity in their compound on Troynoy Island inside the Arctic Circle.

Troynoy Island in the Kara Sea.

On August 31, a polar bear killed one of the watch dogs at the meteorological station and then lingered at the site. Nine other adult polar bears and four cubs then set up camp and at one point an adult female bear was sleeping under the station. Vadim Plotnikov, a scientist at the station described the situation; “A female bear has been sleeping under the station’s windows since Saturday night. It’s dangerous to go out as we have run short of any means to scare off the predators,” Plotnikov said. “We had to stop some of the meteorological observations.”

Global warming and the resulting early sea – ice melt is being blamed by the research group.

“The bears usually go to other islands, but this year they didn’t. The ice receded quickly and the bears didn’t have time to swim to other islands,” stated a spokesperson for the team. “There’s no food … so they came up to the station.”

Arktika is the first of a new class of ships known as Type LK-60YA, The long – term plan is for three vessels all commissioned by Russian state nuclear agency Rosatom. Utilizing 80,000 hp (60 megawatts) to crush ice, Arktika will be able to break through thirteen feet thick sea – ice and forge shipping routes in the high Arctic. This will allow container shipping along northern routes that otherwise would be impassable. The ensuing two sister ships will be, Siberia and Urals  and will be built in 2018 and 2020.

“There are no icebreakers equivalent to Arktika anywhere in the world,” Rosatom CEO Sergey Kirienkoy. “The icebreaker Arktika means real new opportunities for our country.”

Russian President Vladimir Putin maintains that the Northern Sea Route could be a better trade route than the Suez canal for world trade, The new icebreakers will play an important role in facilitating this expansion via the shorter distance to Asia and Europe while forging a consistent new route through the Arctic.

Russia currently has six nuclear icebreakers in operation as well as more than 30 diesel vessels while the United States has three Coast Guard operated icebreakers which are non-nuclear. The US vessels command only a quarter of the power that the Arktika has. This overall disparity has some officials concerned that Russia is primed for gaining a huge advantage in Arctic shipping and also the exploration for gas and oil deposits in the seabed.

“We’re not even in the same league as Russia right now,” stated Coast Guard Commandant Paul F. Zukunft  in 2015.

The Obama administration is pressuring congress to approve construction of another Coast Guard icebreaker by 2020. Coast Guard has made it clear that the country needs to step up its fleet, “to ensure continued access to both polar regions and support the country’s economic, commercial, maritime and national security needs.” These needs come at a hefty price of roughly a billion dollars per ship.