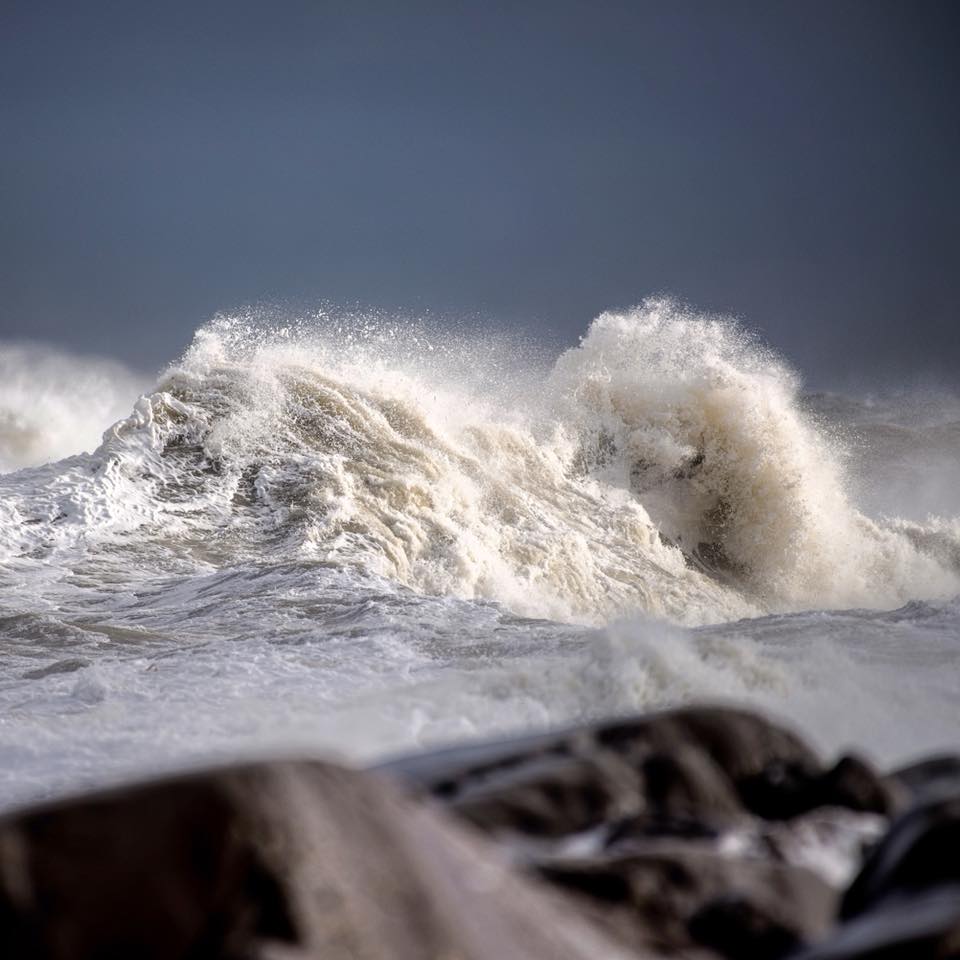 Waves continue to roll up onto the icy Precambrian shield that forms Churchill’s coast while temperatures have fallen slightly (20F) and intermittent snow seems to be a daily occurrence. When the conditions permit, Polar Bears fly through the sky at a frenzied pace…in nets of course….under helicopters heading North, inland somewhat, to release the “problem” animals away from Churchillians and their seasonal visitors from around the world.

Our dogsled trips outside of Churchill proper, led by mushers Kelly and Robert, looping through the old Dene village, have become picturesque as the rime ice has blanketed spruce and tamarack trees with frosty veils. The dogs are so well conditioned now that their sprints over trails barely produce prolonged pants from their ever eager mouths. Occasionally a Polar Bear cruises into the vicinity only to add to the surreal setting. Not completely sure whether or not you would prefer the bear flushed from the willows and chased away by bear monitors — it would surely be a once in a lifetime experience, but not necessarily a positive one. This type of experience can only be truly appreciated once one is back home on the couch relaxing after a grueling though somewhat mundane day at the office. These dogs were born to run and your “boss” should know that!

On the tundra in the Churchill Wildlife Management Area, the sun rose above the horizon at 8:09 am and slowly began to warm the land and air. Hoar frost enhanced the light as all came alive in its wake. The Tundra Lodge travelers and guides awoke to the aroma of berry pancakes, sizzling bacon and freshly brewed coffee…and bears everywhere as is customary this season. Mothers with COYs (cubs of the year) seemed cautiously amused by the incessant sparring taking place all around them. Guide Bonnie reported five bears under the kitchen huffing and growling so loud that the whole enclosure reverberated like a harmonica. While the group sat down for breakfast, a flock of roughly 85 red polls, both Hoary and common, fluttered in and about the willows near the lodge. A nice touch of color to the tundra. Of course the biggest news from the lodge was that Rocky, the bruiser bear is now gone, perhaps signaling a not so distant end to this epic season. We all have high hopes that there will be as many sequels to this Polar Bear season as there was to the movie bearing our lovable bear’s moniker.

Guide Paul with his group was out at Bird Cove admiring the “best” Arctic fox of the season as well as a bevy of rock ptarmigan in…yup…the shelter of the rocks. This Arctic ecology really isn’t that complicated, folks. Later as their rover brought them in close proximity to the lodge out on the spit bay-side of the structure, “a parade of bears” was the best quote describing the scene. Mothers and cubs out on the land-fast ice. Big males sauntering around throwing uneasy gazes at each other and sparring when a gaze was met with an even more uneasy gaze ruled the day. A mother with a coy, a 900lb male with an ear partially removed, and about 10 bears under or just around the lodge made for additional glorious bear viewing. Bears galore.

Guide Sue and her crew of travelers had a special guest, Darcy Callaghan, on their rover for the day. Darcy from the Churchill operations office was out for a day of respite from a long thrilling season. Darcy works tirelessly (he wears shoes) helping to keep the well oiled logistics machine in Churchill going on a daily basis. He’s a longtime Nat Hab employee as well as a pioneer in the noble cause against the Harp Seal hunt in Eastern Canada. His affiliation with and dedication to International Fund for Animal Welfare is ongoing to this day even as the spotlight has shifted to other areas and causes. A unique visionary from Prince Edward Island.

While out near Gordon Point, Sue and her group spotted three bears coming back toward the land from the spit jutting out into the Hudson Bay. The group spent an hour or more as the bears came closer to the rover and continued across the tundra. Still not enough ice to keep them interested or occupied. Some mothers and cubs were seen a short time later along the coast road and then an elegant Cross fox near the back of the rover. A bear sleeping in the kelp bed nearby lunged up and ambled after the fox for a change of pace. An unsuccessful attempt brought him back to his kelp and dreams of another chase….this time of a tasty seal on ice.

Travelers in Guide Karen’s care saw a stark white Arctic fox on the coast road just past Gordon Point. Some sparring in that area by a couple of big brawny males also made for a good wildlife viewing morning. An unusual sight came just after lunch when the group watched as a bear was able to get its paws up on the railing of a rover chartered by Churchill Nature Tours and its guide Steve, a longtime fixture to the bear season in Churchill. Luckily nobody was taken by surprise and the bear moved away as the driver revved the engine lurching forward. All in all the memories of the day were highlighted by the soft sunlight on the Hudson Bay flowing in and fusing with the ice along the shore. More and more bears were noticed lying in wait out on this ice anxiously awaiting the onset of “their own” seal-hunting season.