The cold persisted again today as temps were around 17°F with slight winds. The Hudson Bay crashed icy waves on the rocks, freezing over the stone thus making a seamless transition between shore and land-fast ice. No bears out on parole today as all is quiet around D20…the Polar Bear Compound. 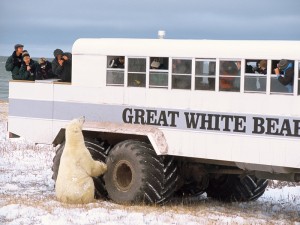 Polar bear and a polar rover in Churchill. NHA photo.

Back on the tundra Guide Karen had her group again spotted a large bear just outside of town by Kelly and Robert’s dogsled camp. Another bear was seen right before the launch site. Once on the rover, eight bears were spotted at the lodge including “Rocky” who examined the rover by going under the deck and sniffing boots and then standing up on the vehicle. He then proceeded to check out the water supply truck by attempting to board that vehicle and drive back to the shop. In addition, two male bears were sparring on a nearby pond for a good five minutes. The two then wrestled in the snow for awhile, another ten minutes, before parting ways. Out at Gordon Point later on the group was able to spot a beautiful Cross Fox in the shimmering light.

Guide Scott reported in that bears seemed to be all over the vehicles on the inland road close to the lodge. One aggressive male whacked the driver’s side door before going to the rear and sniffing boots from under the back grated deck. As the group approached Halfway Point they saw about seven or eight bears hunting in the leads out off of the long spit that extends out into the bay. One bear was observed diving in off the ice and staying underwater for a good minute and a half. When he came up he had a seal and ripped a chunk of fresh meat off as the group took turns watching through the scope. This one bear ate for 30 minutes and then another big bear came and pushed that bear away and finished the job. Wow.

Guide Paul’s group spotted about 20 bears throughout the day, mostly up along the coast road as well as Rock Ptarmigan. One particular female came underneath the vehicle and then lounged nearby while the group ate lunch. later, on the Flats out East, mothers and cubs, a Glaucous Gull, Horned Lark and some sparring male bears made for a full afternoon. In the bay, the flow ice was moving out on the heels of a prevailing Southern wind. Pheww