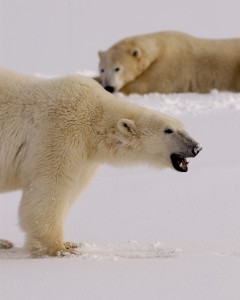 Another sunny day in the North with cooler temperatures that will hopefully provide motivation for the polar bears to increase their activity. Any day out on the land can provide countless behavioral circumstances and the unpredictability of the early season can be just as exciting as days when bears are sighted in every direction. These days are the Arctic version of the African safari.

After chasing a phenomenal sunrise out East to launch, guide Elise and her band of travelers quickly came upon a bear sleeping in the willows and camped there for a morning snack aboard the rover. This bear joined them at times munching on a willow branch or two. Willows contain low levels of aspartame and some researchers have speculated the bears enjoy the willows for the slightly sweet taste as well as a bit of energy boost from the sugar like compound. Willows were considered sacred to the Irish and Druid high priests, priestesses and artisans and they would frequently sit among them to gain eloquence and inspiration. Watching a polar bear lounge among them exudes a sense of this ancient connection to spirituality.

Later, out around the tundra lodge, a couple of male polar bears roamed and rested nearby. Ptarmigan in mid-molt, sensing snow on the horizon, seems to be willing their feathers to turn white. The usual snow buntings were omnipresent all around the tundra as well. Shutters clicked and many in Elise’s group carried smaller versions of the “Hubble telescope” for cameras. A memorable day on the tundra for all…except the sleeping bears that is!

Guide Melissa and her travelers moved all about the tundra and spotted five or six bears..mostly lounging. One bear bounded around and seemed quite in a hurry to get someplace. As it turned out, a more secluded spot for an afternoon nap was the goal and the group watched intently. Not sure which is more enjoyable; watching a polar bear or a baby sleep?

Guide Sandra’s group ventured out on their night-rover trip and were fortunate with beautiful multi-colored skies and a magnificent arctic hare out by the lodge. Later on an arctic fox, the first reported sighting by groups of the year chanced to venture right up to the rover much to the awe of all on board. Unique photos were captured by elated travelers.

Local Churchillians are abuzz regarding the pending mayoral election on October 27. Incumbent Mike Spence has once again decided to run as challengers Rose Preteau and Brian Ladoon vie for support. Rumor has it that national television networks have pledged huge campaign funds to Mr. Ladoon with hopes that a victory would spurn the next great reality tv blockbuster. I would explain but I honestly would not even know where to start. Ask around if you make it to Churchill.