With a front approaching from the north, overcast skies were the norm with moderate temperatures. The first dusting of snow vanished as fast as it came though reinforcements are surely mounting in the northern arctic.

Guide Eric and his crew of travelers had a good evening on the tundra in the CWMA..though prior to their excursion they had a memorable experience at the inukshuk by the bay behind the town complex. While stopping to take in the vastness of the  Hudson Bay, a frantic flurry of snow buntings swarmed down over their heads, landing on the rocks and beach. Immediately following the flock, a gyrfalcon soared overhead perhaps seeking a meal or two or three…buntings are the arctic version of buffalo wings at a sports bar down South. Just to add a final touch to the scene, a ringed seal peered curiously from the placid bay just offshore.

Later out around the tundra lodge, the group sipped wine with dinner as they watched a polar bear in the willows as an arctic fox meandered by in search of a meal for itself. The distant window lights from the lodge gave it the appearance of a train stopped at a station with no destination ahead. While daylight prevailed, bird-life in the form of large numbers of snow geese and Canada geese were viewed out closer by the bay.

Aside from some polar bears lounging around the tundra lodge, there have been unusual numbers of arctic hares flopping about. Arctic fox sightings have escalated notably in comparison with the past few seasons as well. One of those arctic foxes gave guides Bonnie and Colby and their group on the lodge a unique encounter to watch and photograph.  The white fox continuously stalked and darted at a hare and at one point said hare stood on two legs to keep a watchful gaze at the fox.  Unsuccessful and frustrated in the hunt the fox backed down and moved on. 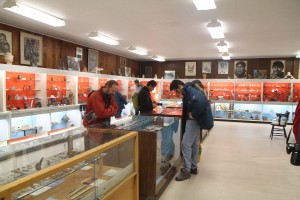 The lodge folks also witnessed another similar pursuit out on the tundra. A peregrine falcon was attempting to savor a snow bunting meal just like our gyfalconr by dive bombing and scattering the buntings in every direction.

The Eskimo Museum in Churchill has acquired another unique carving from the north..this one from Repulse Bay. The acquisition can be found in the Inuit game display area and depicts a woman playing a string game with her fingers. The museum features one of the largest and most pertinent collections of Inuit carvings in the North. These treasured art pieces have been collected over decades by traveling priests and museum collectors. Truly a hidden gem in this tiny coastal town on the Hudson Bay.