A northern front arrived with cold rain and strong winds of 40-50 mph. By late afternoon, around four o’clock, the rain was trying to change over to snow as winter continued to knock at the door. A dusting of snow covered the tundra by late evening as the winds continued to howl through the region.

The tundra lodge group had an early breakfast and headed into town for some dog-sledding and helicopter flights. Guide Bonnie rounded out her bird sighting list for her group reporting mallards out on the ponds, a common eider, greater scaup, black bellied plover,one greater and one lesser yellow legs and 17 Brandt geese at the edge of the Hudson Bay out by Halfway Point. Helicopter passengers reported viewing 29 polar bears out at Cape Churchill and Wapusk National park. These animals will begin making their way down into the CWMA with the change of temperatures and Winter conditions. One of those already out near the lodge might have been the bear guide Elise reported apparently favoring the use of a rock for a pillow. Guide Colby Brokvist captured the image from a rover day excursion with the lodge group. 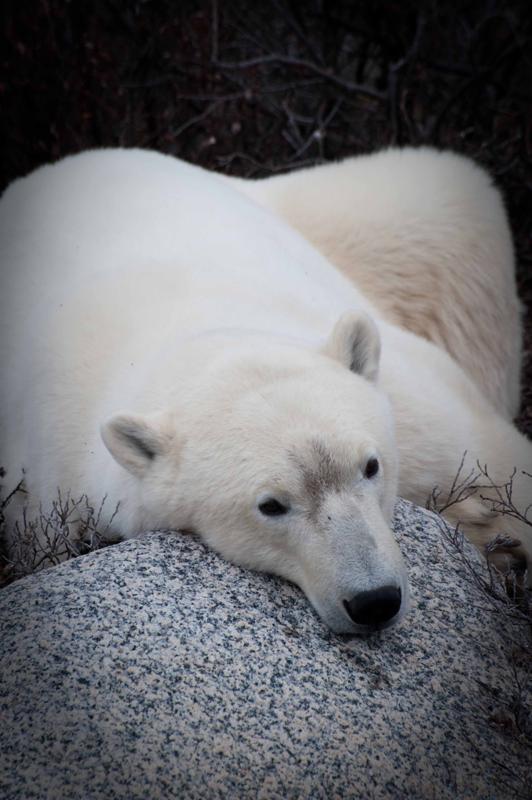 A polar bear taking a rest with a rock as a pillow. Colby Brokvist photo

Guide Sue and her folks were out braving the elements observing a couple of male bears out near the lodge. Mostly hunkered down out of the rain… still nice to be in their environment observing what these animals tolerate. Later, the group observed a very clean, white bear at Halfway Point then a notoriously dirty bear around Gordon Point. Those Gordon point bears just don’t bathe regularly.

Another highlight of the afternoon occurred near first tower when Sue’s travelers spotted a bald eagle quite close overhead. Witnessing the flight of such an impressive raptor in the tundra environment is surely a lasting memory.With the day coming to an end, the rover weaved its’ way back toward launch between the shallow thermakarsts (ponds) with choppy water on every surface.

Guide Eric and group, also out in the CWMA, happened upon the first sparring bears of the season in the late morning on the inland road. About 15 minutes of rough-housing thrilled the folks while sipping hot drinks aboard the rover. Another 4-5 bears scattered throughout the day gave the group quite the day on the vast land. Out along the coast, good numbers of eider ducks floated in the shallows. A gyr falcon after snow buntings kept the exciting afternoon going and plenty of willow ptarmigan on the way in finished off a complete day on the tundra.

In town the night music scene was rocking as Kyle Martens, son of Gord and Lynn Martens who own the Northern Nights Lodge, was playing with his band at the Seaport Lounge. Meanwhile, Celtic band Dusty Ryno’s played the Tundra Inn Lounge. Only five months to St. Patrick’s day. Local phenom Evan Reeves, who finished near the top of Canadian Idol a few years back, is in studio working on a new CD. Evan is the grandson of Myrtle DeMeulles a local Metis elder who frequently educates travelers about Metis culture.