Windy snow squalls and chilled North winds continued their onslaught on Churchill in the early morning. Winter continues to slip into the region most notably with the distinct appearance of ice forming on the edges of all the scattered ponds all over the surrounding tundra. A light dusting of snow covers the area… enough to ease everyone into the revelation that the long, frozen time between now and May or June is on the doorstep.

The Port of Churchill seems to always feel the pinch at this time of year as well. With the need to fill six more ships’ holds before the end of the season, dictated by ice forming in the Hudson Bay, crews are working round the clock to get the job done. It takes about four days to fill all the cargo space in an average size vessel and the port can accommodate two ships at the dock at once. The two at the port now will sail to Italy and Nicaragua in the next couple of days and two of the four ships waiting out at four-fathom hole in the bay will be ushered in via tugboat. The total number of ships for the year is 22… a good season. 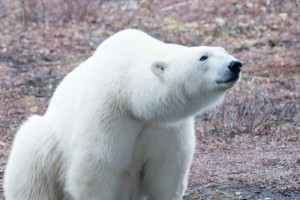 A polar bear catches a scent in the breeze. Colby Brokvist Photo

On the land, bear numbers are increasing slightly as the snow and cold creeps in. Guide Sue and her folks covered extensive ground out in the CWMA and crossed paths with nine or ten polar bears. Way out East near ptarmigan Alley, two big male sub -adults lounged about occasionally acknowledging the rover and showing face for good photo’s. Later, after lunch at the tundra lodge, the group had another big male wandering around the rover and glancing up through the grate while sniffing at travelers’ boots.

Gyrfalcons and golden and bald eagles certainly are enjoying the lack of snow as evidenced by the white ptarmigan feathers scattered around the tundra. A banner year for ptarmigan numbers has translated into more raptor sightings, particularly gyrfalcons. The snow moving into the area should provide some respite for their prey. A report also was circulating that a researcher from Polar Bears International observed a golden eagle soar down and nab an arctic fox. It seems this year raptors are determined to take center stage on the food – chain platform. Every year a different species numbers seem more escalated….mother natures way of keeping a balance. 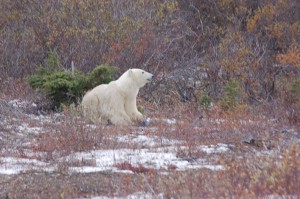 Polar bear alerted by movement near the willows. NHA photo.

Reports from Hudson Bay Helicopters are confirming at least 30 or so polar bears out at Cape Churchill and caribou sightings as well. Many travelers are getting great photographs with the barren tundra as background…a unique perspective for sure.

Guide Paul’s group was almost as far East as you can go in the CWMA and came across a polar bear in the willows quite close to the rover. The group stopped for a hot drink and snacks while the bear lifted his head every now and then for some quality pictures from excited guests. As they headed back to the tundra lodge, Paul picked out a bear through the spotting scope chewing on a willow branch. Seeing these different types of behavior is what it’s all about out on the tundra in their environment..lasting memories. At the lodge area, another male was stretching and moving around giving all aboard both the rover and the lodge a thrill.

Later in the evening Paul and travelers recounted the fantastic day on the tundra while listening to Evan Reeves on guitar in the seaport lounge… perfect ending to a day in the North.