High winds once again prevented the remaining ships out at five-fathom hole in the Hudson Bay from entering the Churchill River and docking at the port to load grain. Churchill often has prevailing northerly winds though these heavy prolonged gusts this early in the season are somewhat rare. It’s a great opportunity for all travelers to get a feel for harsh conditions experienced by the region throughout the long Winter. The polar bears of Churchill don’t seem to mind. The wind chill definitely bites at those without a furry coat.

Hudson Bay Helicopters still reports bears grouped together out around Cape Churchill in the East. Wapusk National Park has good numbers as well including a group of six or seven bears all gathered in a large patch of willows. Respite from the winds could explain these congregations. Some travelers were fortunate to view one of the largest bull moose seen in a long while. ..also in the park. Always a thrill to see these huge animals on the tundra from the air. 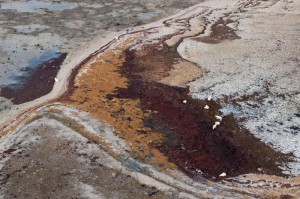 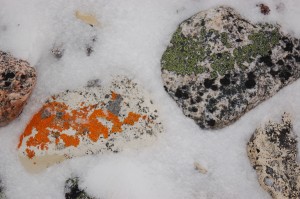 Colored lichen on the rocks in Churchill. Steve Selden photo.

Guide Amy and travelers had a solid day exploring the tundra. Near Halfway Point, early on, they had a smaller polar bear “crawling all over” their rover. Then after a long trek out to the Flats area, the group came upon two big males napping. Soon napping turned to sparring and the rover anchored down to enjoy the amazing show. Lunch was served as the two took breaks and then got back at it. Dessert was served and the two were still at each other toning muscles and honing their skills for protection. Just when the action started to culminate, another large male bear rose from resting near some willows and lumbered over to the two sparring partners. All looked bewildered at that point …the big male sat and the other two went their own ways.  Maybe he was the referee informing the two that the fight was over.

The inland road back to launch provided ample views of colorful lichen species splattered over scattered rocks still straining to show their orange and green spores before the looming snows cover their light-source for the year. Looking back at the Hudson Bay the group took in an incredible scene with the old shipwrecked Ithaca in the distance and a polar bear silhouette in the foreground up on some rocks overlooking Bird Cove. A red fox was the final check on many folks’ list as they headed back…and sure enough one crossed right in front of the rover bringing tears to eyes to some folks on board. Great day in the CWMA!

Travelers with guide Karen experienced a bit more of a surreal, relaxing day viewing bears. Their first encounter was at Halfway Point as a male leaned in against a rocky outcrop, curious though indifferent with the rover, then positioned his hip back on the wall as if lounging on a plush couch. Stretching his long, beautiful neck into the steel gray sky to catch odors rising from the tumultuous waves of the bay, was enough to keep the group mesmerized for about 45 minutes. Then he finally moved from the spot and walked around the rover and sat down while coffee and hot chocolate were poured. On the Southerly side of the rover, a dark -phase gyrfalcon was once again stirring up annoyed snow buntings and riding the thermals gusting up over the rocky ledges. Two hours seemed like 10 minutes to all.

Later out toward the Flats, a bear that was up on another rover darted suddenly into the willows then came back out on the trail further ahead of where two other rovers were situated. As Karen and group passed them by and maneuvered closer to the four-year-old male, he would stand up on his haunches and give curious looks at the rover. This went on for a good 20 minutes until he finally disappeared off into the willows as fast as he appeared.

On the way back, along with Christmas Lake Esker, another polar bear approached and walked under the buggy sniffing the underside all the way and pausing to smell some human boots through the grate of the back deck. In the distance, two light and two darker caribous walked slowly together across the land. Binoculars captured their ghost-like steps in and out of the far off willows. 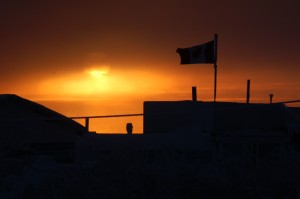 Sunset at the flats by the Churchill River. Steve Selden photo.

Guide Brent’s contingent had similar Christmas Lake Esker encounters viewing five caribous, one of those a calf, near the boreal forest that juts out into the tundra barren land. Prior to this sighting the group also had a three-year-old under their rover at Halfway point…curiously sniffing all over and then running off toward the rocks above the beach.

All groups, back in town, caught the zenith of the most incredible sunset of the season over the Churchill River. The pink, red and orange hues filtered down through the ice crystals in the sky and on the willows to create a brilliant glow that finally diffused to the North beyond Prince of Wales Fort and out past Button Bay.