A pretty calm day in the region as the winds subsided somewhat and many groups headed back home while another band of travelers came to town. Cool temperatures just below the freezing mark felt slightly colder with the breeze of the windchill. 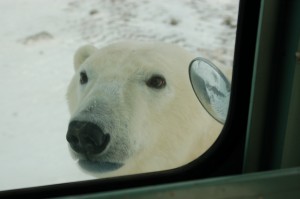 Images near the rear – view mirror may appear larger than they actually are! NHA photo.

Guide Karen was out on the tundra with her enthusiastic group. Amid the scattered thermokarsts, now almost completely covered with grease ice, the rover moved out between Gordon Point and first tower. A polar bear lying just off the trail on the edge of some willows took notice as they approached. The group stayed for a good while watching the reclined bruin as he periodically lifted his head and then reclined again. As they moved away from the bear and headed out they saw a large raft of surf scoters in the bay. A horned lark also flitted on the tundra in the drying foliage of long past berry plants.  Near Ptarmigan Alley they spotted a bear off in the tidal flats sniffing and munching on some washed ashore animal part of some sort.  The bear had some blood around the muzzle and paws. After his snack, he lumbered up to the rover and lingered about fifteen minutes under the rear observation deck. With increasing curiosity, the animal then reared up on hind legs and place his paws against the rover…his bulky frame coming only about a foot below the top railing. Travelers got great looks at the blood on his paws and face. Trick or treat!

On their trip back toward launch, the group spotted ptarmigan in and near the willows…two pure white and another few still with speckled white and gray feathers blending nicely with the ground. Another polar bear was spotted near a pond just after the turnoff to Halfway Point sitting up and sniffing the scents on the wind. Karen and her travelers watched for ten minutes or so and then headed to the launch and back into town.

That evening the group was presented with a lecture by Guide Bonnie Chartier on the first days of Churchill polar bear tourism. Bonnie and her husband at the time were the first pioneers of the then unheard of concept of ecotourism. Bonnie was standing in for Historian Bill Calnan who is also an agent for the Canadian shipping industry. Bill needed to be down at the port attending to a customs issue involving a ship.

Guide Eric and group had dinner out on the tundra lodge catered by Chef Sasha. The evening was a perfect way to enjoy the starkness and quiet out on the land in the evening. A couple of bears walked around in the shadows of the lodge and an arctic hare scampered here and there as the travelers enjoyed gourmet fare and good wine. On the way to the lodge, the group saw two polar bears lounging in the protection of some thick willows and after, on the way back to town, a huge male was caught in the headlights of the bus as he sauntered right down the middle of the road. We brake for bears…always.