A calm overcast day in the Churchill region with a beautiful sunrise greeting transport buses headed out to the rover launch area. Temperatures stayed under the freezing mark continuing to facilitate ice formation on the tundra scattered ponds. No surf today for transplanted Californians.

Guide Steve Morello, returning to Churchill to guide three photo trips this season after a long hiatus, was enjoying a “great trip” with photographers in the group having some wonderful  Northern light to compliment the animal sightings. A highlight of the day included a male bear breaking away loose chunks of ice forming on a thermokarst out around the flats area close to Gordon Point. The bear would then occupy itself with a frozen chunk..playfully tossing and chewing it while rolling on his back in animated fashion.  Later on that afternoon, the shots of the day came when the rover pulled up to a sow and two cubs resting peacefully near some willows between Ptarmigan Alley and the tundra lodge. The cubs had that epic positioning of heads resting on their mom’s back as they huddled close to feel the warmth of her fur. Wildlife photographers paradise! A greater scaup by the bay was an added bonus for the birders in the group.

For guide Sue and her group, the day had an auspicious beginning with a polar bear mom and cub at Gordon Point almost in the exact area that guide Paul and group watched nursing just yesterday. A safe secure spot with ample visibility for any males looking for trouble….or a cub. 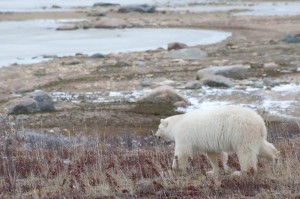 Polar bear heading down to the shore. Paul Brown photo.

Another medium -sized male bear was quite curious just as the rover moved up the trail toward Ptarmigan Alley. The bruin came toward the vehicle, sniffing at the bumper as if inspecting it and finally allowing the group to continue as they followed the coast road searching for birds. The bear plodded along the road as well. Churchill bird expert and guide Bonnie Chartier, between her own lodge groups, was on board to find all avian life in the CWMA.

Soon the group was watching black-bellied plovers pecking along the tidal flats on a stopover from their journey North to South. Some eiders were spotted in the shallows of the bay and some long-tailed ducks flew over frenetically flapping with plans for a Southern journey imminent. Long tails were previously known as oldsquaws but that moniker fell out of favor due to the negative connotations of the word squaw in English usage. Biologists similarly felt the name to be offensive to some native American tribes involved in a conservation effort to protect the bird. Sighting “political correctness” being insufficient to change the name in 2000, the American Ornithologists’ Union did officially grant the change “to conform with English usage in other parts of the world”. Phew….now I can sleep.

As the rover traveled East toward the flats, a male seemed to define “walking hibernation” as his trance-like slumber mesmerized the group. Opening his eyes appeared arduous while stretching catlike several times before returning to dreamland once again….mmmm ringed seals with au jus sauce…lick lips…cut.

The area was stocked with about a dozen polar bears all active and some endeavoring to spar. Lunchtime was a perfect reason to stay put and take in the action on the surrounding tundra. While enjoying hot soup and sandwiches the travelers watched as a young fat male challenged an older, skinnier yet taller male. The smaller male tried to tip the scales by positioning himself on top of a large glacial rock pushed into the area about 200, 000 years ago. Watching the balancing act was as enjoyable and entertaining as the sparring itself.

As the day waned a huge 900lb male polar bear walked past in the near distance and moved along the tidal flats uninterested and unfazed by the rover and its’ passengers. The light to the North accentuated the muscular frame of the bear as he became smaller on the horizon. As the group circled and then headed back on the inland road another set of mother and cubs was sighted resting peacefully in the willows..a perfect way to finish up an amazing day before returning back into Churchill.

Back in town, guide Brad told of a rare sighting of an all blue phase arctic fox in town. This fox will not turn white in winter appearing stunningly beautiful against its’ winter backdrop.

Guide Karen had some folks out on dog “carts” ..custom made vehicles used to simulate the snow. All enjoyed the experience immensely. 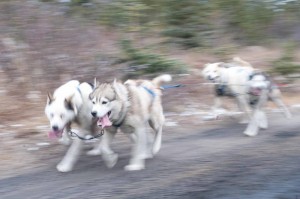 Sled dogs on the move in the Churchill bush. Colby Brokvist photo.