Churchill experienced the full spectrum of weather conditions this day. Scattered snow squalls turned to rain then sunny skies back into some snow squalls and finally warming up slightly by days end. Polar bears continue to build their numbers in the area as guides report groups viewing between eight and 17 bears on the tundra over the course of a day. 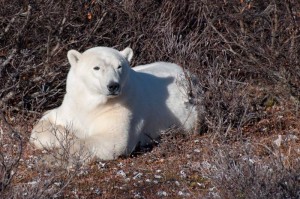 A polar bear resting in the willows in the Churchill Wildlife Management Area. Colby Brokvist photo.

Guide Brad and travelers had a stellar day out in the CWMA. He reported, conservatively, around 14 bear encounters over the course of the ever-changing day. At the outset, the group came upon a sow and two cubs crossing a small frozen thermokarst between Halfway Point and the Eastern flats area. Where else in the world can you have your morning coffee while watching a family of polar bears from the comfort of a heated polar rover?

Once out at the flats, the group viewed a number of bears, mostly males, in different behavior modes. One very large male sported a foot-long gash under the left arm. Brad speculated that this could have possibly been one of those bears a few days back that enjoyed the seal kill along the coast. There was some heated aggression between the fortunate feeder that day and this guy might have taken the brunt of the confrontation. This bear looked as if he was going to survive as the gash appeared to be healing up. Any wound or fracture too severe could spell doom for any animal this time of year with the harsh winter conditions set in. 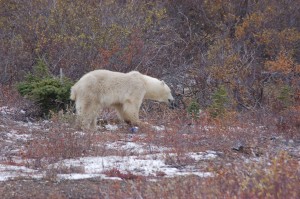 Moving back toward the tundra lodge area, a vibrant red fox was seen and followed for a short time as it tried to capture a lemming or two in the tundra’s ground cover. Then back around the lodge exuberant photographers clicked away as they were capturing arctic fox and polar bears in the same frames with various juxtapositions and interactions. No chasing going on this day but the two species seemed truly at ease with each other.

The wealth of wildlife sightings did not end once the group disembarked from their rover….on the way back into town aboard a shuttle, a big three-year-old male was walking along in the willows and along the lichen-encrusted rocks across from the airport. Once bears start to stray from the CWMA out East and explore the outskirts of Churchill, everyone comes to realize that the season is in full swing. Back in town, another red fox was patrolling the grounds around the ponds in front of the Churchill grain port…the group’s last sighting before heading for dinner themselves. Over dinner, the group recounted the day and their thrilling evening rover trip the previous night when another big male confronted the rover head on and planted his face and paws right up tight to the windshield. A pretty good 24 hours. 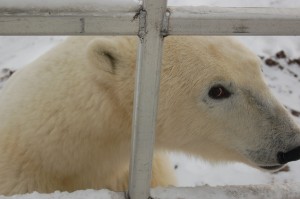 Guide Amy was wiping, for lack of a better word, “snot” off her boots recounting how an “unflappable” large male spent a long time underneath her group’s rover and sniffed and apparently slobbered on many boots. Unfazed by any human movement, the only irritation displayed came when he chased off another smaller male and exhorted an uncommon growl almost sounding akin to a lion. Sniffing boots can be risky business in the high North.

Also out by the tundra lodge, the photo’s of the day came when two bears were caught with a flock of roughly two dozen ptarmigan in fhe foreground. Rick the seasoned rover driver remarked that he had “never seen that kind of cool wildlife combo before” out on the land. The sun that was peeking through the clouds soon vanished and as the group sat up on the rise above Bird Cove, light arctic rain began to fall on the lichen splattered, gray rocks. A brilliant white arctic fox popped up from behind a boulder, posed for a few moments and then scurried off. Time for this group to do the same.