A windy pre-election day in Churchill and the surrounding region. With the prevailing East wind came the wide range of weather over the last two days. Sleet and rain battled back and forth throughout the day finally trailing off to windy conditions. The forecast is for scattered freezing rain changing to snow at the end of the week. All this changing weather may be the weather gods signaling a change in the office of mayor ….Brian LaDoon..mayor of Churchill? Find out tomorrow.

Out at the tundra lodge, far away from bustling downtown Churchill, the folks lead by Guides Rinnie and Leah were enjoying a rare scene. Four or five bears that have been occupying the area around the lodge migrated about a quarter mile down to the edge of the Hudson Bay and were feeding on a seal -kill. The bears fed on the high-fat content meat throughout a good part of the day providing all on the lodge and a few rovers in the area with incredible looks and photographs. Although the seal ignited some tension over the feeding process, no sparring occurred. A couple of bears rose up on hind legs and feinted at sparring though the fresh meat on the beach changed their minds. The red blood smeared over their faces and paws made for interesting photos and lasting images in everyone’s minds.

Some of the lodge group ventured out East on the rover and came across a sow with two yearlings lounging near some willows. Then, a little later, a sow and two coy’s (cubs of the year) were discovered wandering and then resting just west of Ptarmigan Alley in the flats area. Great sightings for a gray weather day on the land in the CWMA. Back to the warm, comfortable lodge for a gourmet dinner. While at their base for the week,  the early evening brought out the four arctic foxes that have taken up residence under and around the lodge. Some snow buntings and a flock of healthy, energetic willow ptarmigan in full white plumage filled out the landscape as the arctic light slowly melted away. 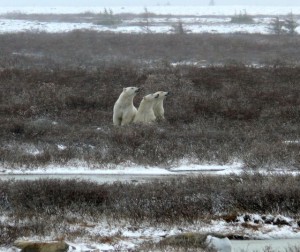 Polar bears sniffing the wind along the trails of the CWMA. Chuck Schoffner photo.

Guide Amy and travelers continued to discover great experiences out on the land. They came up to the aforementioned seal kill on the the beach with a huddle of bears surrounding it. Bloody faces peered up from time to time as a smaller male looked on from a distance. There seemed to be a pecking order of sorts playing out within the population on the scene. Later in the day as the group passed by on the way in, the little guy and a few ravens were finishing off the scraps left over. Flipper licking good!

As the gray clouds melded together and wind velocity increased, the rover headed out to Christmas Lake Esker. A nice look at the edge of the boreal forest and some fresh caribou tracks on the land next to the rover painted a vivid picture of life in  this sub-arctic landscape.

The wind increased even more as the group arrived at Gordon point and within sight of a sow and a two- year old cub. Shortly after arriving they witnessed a large male heading methodically in the pair’s direction. Once mom caught scent off the crisp wind, mom stood up. surveyed the threat, then started loping off hurriedly with her cub stopping every few moments keeping a nervous eye on the male. The two moved just past the rover never even noticing the machine…more mindful of the intruder instead. The feel of being present in nature while these interactions unfold is priceless. 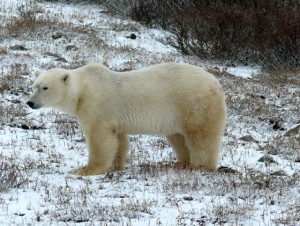 A polar bear near the willows in Churchill. Chuck Schoffner photo.

In town, many groups had the thrill of a 700lb male being air-lifted via helicopter up the coast to be released. This bear was the first bear to be incarcerated for the season and finally made bail for freedom. Rumor has it that a certain mayoral candidate posted bail in order to gain support from nature enthusiasts and animal rights activists. Film at eleven.