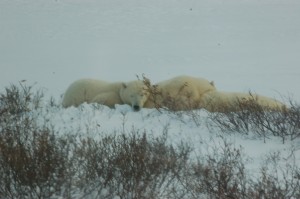 Heavy snow continued into the new day, finally dissipating later in the day. Familiar snow drifts were formed around each corner and in town and across the tundra where willows, spruce stands and land formations allowed. Vehicles in Churchill struggled to free themselves from the grip of these drifts; spinning wheels all over the place. More headaches for drivers; though more arctic beauty for everyone else.

While town folk were hustling and bustling in the blizzard conditions, viewing out on the tundra in the CWMA was fairly docile while wildlife settled in early on and became more active in the afternoon. Guide Elise and group motored through the blizzard in their heated rover and came upon some sleeping bears early in the day. A sow with her two cubs finally stirred and mom began rolling around seemingly quite content with all the snow on the land and in the air falling. She was posing in every possible way in what Elise called “polar bear yoga”. The cubs weren’t sure what to make of mom’s stretching and stayed close by.

Polar bears are the king of the Arctic. Paul Brown photo.

Soon another bear came by checking out the two unusually large cubs..keeping his distance and moving off into the snow that was blurring the land and sky together. Once he was out of the area, one cub became curious of the rover and walked over and stood up on the side of the vehicle…coming face to face with excited guests. He then moved to the rear and spent a good amount of time under the back grated deck inches from people above.

Guide Sandra took her group along the back road behind the coast road and encountered a male polar bear sleeping in the willows…after awhile rising and running off toward the coast. Another two bears in willows hunkered down content to ride out the storm under shelter. Continuing on to Gordon Point, the group viewed some bears in the distance looking ghostlike in the blowing snow. just past the next turnoff back toward the tundra lodge, a lone, smaller cub was seen all alone in the storm ….no mom in sight. Soon she scurried into the willows. If mom lost track of her cub in the weather, she would surely pick up her scent and reunite soon once the wind subsided.

Three more bears were discovered as the rover made way to the tundra lodge up on a ridge between the bay and lodge. they all ended up at the lodge and the rest of the afternoon was spent watching mostly males right around the vicinity of the lodge. Great day in the elements of the sub-arctic.

On night rover excursions, three groups led by Brad, Elise and Paul all settled in around the tundra lodge area. The highlights of the evening were a sow and twocub beddedd down by some spruce trees to the South of the lodge. Also, three slumbering sub-adults rising to wrestle for about 45 minutes and provide thrills for all as they sipped on hot drinks. The wrestling and sparring accented by snow blowing off their backs and heads provided surreal sights on a cool night in the CWMA. This was “classic sparring” according to bear expert and guide Brad Josephs. The night was capped off with great looks of two arctic foxes sniffing and scavenging around the back side of the lodge. 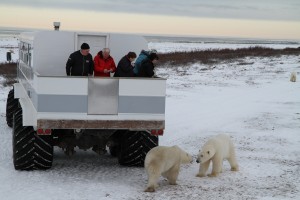