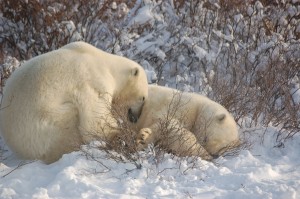 The skies cleared to reveal the sun and illuminate the pristine snow cover that now blankets the region. Enhancing the natural beauty of the land as well as making it feel more arctic-like always is the silver lining when a major storm hits. When the snow settles, everyone shifts gears and digs in for the long Winter. Most people that live in Churchill thoroughly enjoy it and wouldn’t want it any other way…well maybe one more month of Summer.

The tundra in the CWMA provided ample polar bear viewing and the varied behavior of the animals is certainly more apparent. Guide Steve and travelers were lucky to spot and observe three sets of sows with cubs. Guides are noticing that they seem a little more skittish these days as many lone male bears are on the move and asserting territorial pressure on each other. These actions are agitating to the bears and in turn, some are slightly more aggressive towards mom with there cubs. After the family viewing, Steve’s group then made their way to the area near the tundra lodge where they observed male polar bears sparring for the second day in a row. They had viewed some sparring earlier in the day though it was a shorter bout.  The interaction at the lodge was more prolonged with more rest breaks due to the slightly higher air temperature. 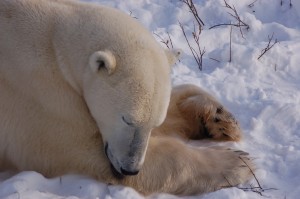 The group under Guide Paul’s leadership had a really good day searching for wildlife. Most of their day was spent near the tundra lodge where they also took in some sparring and other random, mostly young male bears stirring about. An arctic fox looked for some attention as well as she playfully rolled around in the fresh snow. Near the gateway trail to the lodge, a sow and two larger yearling cubs were bedded down near a spruce stand of trees.  Pretty relaxing just to watch bears relax I think.

Topping off the afternoon, birders in the group were excited to catch a quick view of a gyrfalcon soar right over their rover and tundra lodge. At Halfway Point the group also saw a black guillemot in the distance. The highlight of the day was seeing a female bear off by the edge of the bay feeding on a seal kill. This has been observed before but this one had a little more excitement to it. A big male appeared and was investigating under the rover when he finally caught the scent and sight of the female on the seal. He proceeded to chase her off the meat and she fled into the water …swimming about a quarter mile out, waiting and watching the male eat his newfound lunch.

Guide Sue and folks had a great day as well. Gordon Point area provided them with a sow and coy nursing on the edge of the willows up against a snowbank. Three newly arrived rock ptarmigan were sighted there as well as a long-tailed duck and an eider duck. The arrival of these birds usually marks the arrival of the snowy owls …though no sightings yet. Numerous other meandering bears were seen over the course of the day..many near halfway point. Another two sets of sows with cubs also occupied the group’s attention while the skies cleared completely and soft light near the end of the day was prime for photography.