Gray clouds covered the Churchill region and the Hudson Bay barely sported any surface ripples amid temperatures hovering just above the freezing mark. A fine All-Saints day to all. 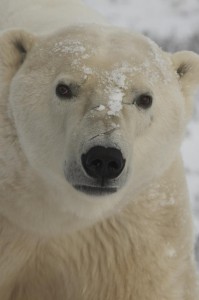 Guide Amy and her group had a “stellar” day on land in the CWMA. Numerous polar bear encounters kept the group enthralled. The day started slowly but quickly picked up pace when, out at the tidal flats in the East, two bears approached from a long distance farther East. Unable to recognize them as bears at first, they slowly revealed themselves as they approached the rover. As they ambled along, one became even more curious and stopped under the vehicle to put on a boot sniffing/licking clinic. It’s amazing the distance these creatures can cover so quickly when they seem to be moving at a snail’s pace. One moment they appear to be a speck on the horizon and the next moment their tongue is on your boot….hmmmm.

Following this experience, the group had an encore as two more males came from the same distance in the East. Bears seem to be on the move from Cape Churchill as October turns the corner into November. These two were heftier males and just like the other two, one, the bigger guy, lingered and sniffed the previous bears’ tracks. Both of these occurrences were unexpected and once in a lifetime happenings for all the travelers.  Some more tundra time was spent along the coast watching resident polar bears lounging lazily in their self-constructed kelp beds along the coastal beaches. Convenient to bed down in something to nibble on as a snack. One of these bears was lying sprawled with belly up as the group watched and photographed from a short distance. I think he ate his bed. 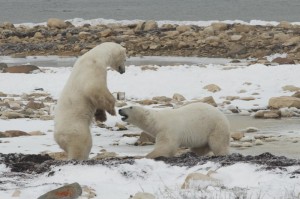 Guide Eric had his group out by the tundra lodge and packed a lot of action into a short day. Phenomenal sparring action sprung up at the lodge between two good -sized males to everyone’s satisfaction. After a good amount of time there, the rover headed back Northwest and landed at Halfway Point. Churchill is unique in that three ecosystems marine, boreal forest, and tundra-all overlap and comes together in one region. Consequently, wildlife encounters can be varied and full of surprises as animals overlap as well. Out at the point, the group had a great show. A couple of gyrfalcons were stalking the last of the snow buntings as they fluttered around the willows. Some ringed and harbor seals were bobbing in the shallows just off the kelp-strewn beach…heads popping up and down like a carnival game. Along the spit of land curving out into the bay,  a snowy owl flew in and landed on a far point. An arctic fox appeared and proceeded to circle the owl a few times while he turned in sync with him;  hips swiveling the whole time. Oh..and yeah..a polar bear was resting peacefully in a rocky nook along the rise. Eric summarized the whole scene as hitting “an arctic grand slam”…..the Rangers could have used one of those! Congrats Giants!

A pretty amazing day and the group would be ready to head out again tomorrow to compliment this day.