Cloudy skies and warmer though cooling  temperatures signaled the possibility of snow moving into the region carried on Northern winds and high air pressure. Though this season has been unusually scarce of snow, normalcy can return in an instant. 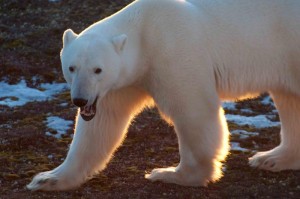 Guide Amy and her travelers enjoyed a day on the tundra near the lodge viewing over 20 different polar bears. A good number were lounging though there also was the normal younger and older males sparring throughout the day. After fulfilling their satisfaction quota , they headed out near first tower in the East and came across a sow with her two coy’s walking over land stopping periodically to keep a watchful eye on a lone male paralleling their paths making mom a little uncomfortable. Finally the family stopped and a ten minute stare-down by mom seemed to convey her frustration with him. He moved away crossing over the trail and away from the area. It’s interesting to wonder what a male is looking for in order to pursue more intently..maybe a mom who cannot continue to shelter the cubs due to her own lack of energy perhaps.

Guide Elise and group also had an amazing day…trekking out to the lodge vicinity in the CWMA where numerous bears were milling about. A polar bear lingered under the back deck  of their vehicle for over an hour…pressing it’s nose against the grate accompanied by numerous deep breaths. Having sufficiently sniffed at boots from all over North America, the animal stood up and leaned on the side of the vehicle a few times inspecting the beings within those boots. Definitely not seals.
Leaving there and en route to first tower out East the group observed two bears lying next to each other and decided to have lunch nearby them. Turns out it was a sow and yearling. This realization that the slightly smaller one was a yearling (a cub going into her second year) came once they stirred and the yearling began to nurse!!! An ” awesome” experience for all… the bears then moved around, walked across a nearby frozen pond, which with the warm weather had some melt water on surface. The glassy surface of the water reflected their majestic bodies as they wandered over to the edge of the pond and curled up again together. Periodically at times the cub would stretch and at one point he was extended fully with one fore paw resting under mama’s chin.

Further down the trail, near first tower, they found a sow with  two coy’s…noticing the vast size difference between cubs of year and the yearling sighted earlier (which was almost the size of mom). These bears had an increased anxiety level as a male polar bear wandered into the area. 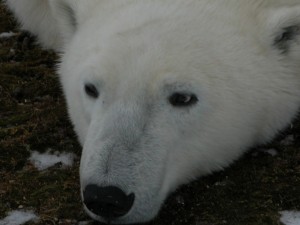 Highlights for travelers with Guide Melissa included a snow white gyrfalcon sitting high atop first tower for considerable time! What an eye-full! Throughout the day sightings of four sets of moms with cubs including timing it just right to see one pair in nursing mode. Capping off their tundra tour they spied an  arctic fox hunting out on Gordon Point..in and out of the rocks and along the plant life dusted white with snow.. a fine day!