Winter returned to Churchill with a vengeance as heavy snow careened sideways all day.. covering the tundra once again. This time I think Winter is here for the long haul……I know..heard that before. Well, this time of year the odds are the temperatures will stay low for now and get much lower believe me. 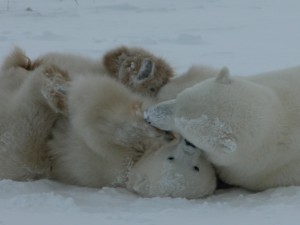 In the morning, on the way to launch,  Guide Karen and travelers recounted last night’s experience of happening upon a polar bear in the middle of the road, by Camp Nanuq, as they returned from from the tundra. A traffic jam of shuttle buses waited and watched while the bear stood its’ ground. Nobody would ever complain about this delay.I’ve always found it a little extra exciting encountering a bear outside

Once on the tundra in the CWMA, the group headed toward the tundra lodge encountering numerous bears all along the trail as the snow blasted the open space and swirled over frozen thermakarsts. As the rover crossed through the broken, open water channel in one thermakarst, a male polar bear lay on the adjacent ice with his head almost touching the water…thirsty? He seemed fairly unfazed as the large machine moved on. Closer to the lodge, three bears jockeyed for space under the rover smelling through the grate as travelers looked down into their black eyes. One bear especially enjoyed rolling on his back and some others did the classic polar bear yoga pose with front feet and head stretched out forward near the ground and furry butt up in the air. Apparently they are delighted with the fresh snow. 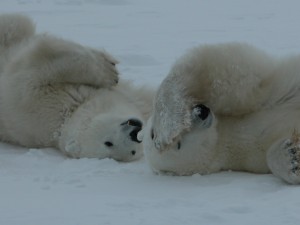 Behind the lodge in the willows, some of the usual sparring was playing out as some of the big bruins were getting in some good whacks at each other..though without the sustained consistency as prior days. A sow with two yearling’s moved off one side of the rover about 50 feet away. They raised their noses sniffing the air as a large male appeared from the direction of the lodge. They then ran out to the sanctuary of the open,icy surface of the nearest lake. The two cubs were right on their mom’s tail as she lead them out to the ice. The male followed to the edge, paused and gave up the chase, lying down by the willows lining the water’s edge. As this all unfolded, two other males popped up out of the willows and showed earnest intent to chase the family though must have sensed her unnerved attentiveness and thought twice. All this before the morning coffee break!

Guide Brent and his photo group were thoroughly excited with the fresh, falling snow as it provided exciting image potential in every unfolding scene. One scene came right away as four male bears out on some pond ice were getting a little rough with each other…not actually sparring full on, though popping each other with a paw and then walking off. This behavior continued as they they shifted positions from ice to willows and then two went back to the ice. Quite a display…fairly unusual for four bears to interact together like this. The peculiar season continues on.

Toward the end of the day, an young arctic fox with a little gray in his coat, patrolled along the snowy tundra visibly weary of the nearby bears. Constantly sniffing the ground, he weaved along away from the lodge over to another rover. Brent’s group actually saw a lemming..what this fox would love to find..out near Halfway Point. Darker on top and white fur on his stomach, he was also working the fast freezing tundra with increased intensity as the shock of Winter snapped at his complacency. Time to burrow down before the freeze.

Earlier in the afternoon Brent guided his rover out to Christmas Lake esker to view the edge of the boreal forest and capture some incredible snow-blown scenes of spruce plastered with drifting snow. These trees near the Hudson Bay are some of the Northernmost trees on the planet. Photographers played with the changing light as the deep gray clouds with their weight of heavy snow moved overhead.

As the rover turned back and headed toward launch, the group noticed the now frozen bear tracks on a nearby frozen lake. The tracks were slushy indentations yesterday but now appeared as molds filled with fresh powder encased by slightly grayish blue ridges  where the paw had pushed up the semi-frozen slush. Sometimes just the trace of such an incredible animal is more thrilling than the real thing. 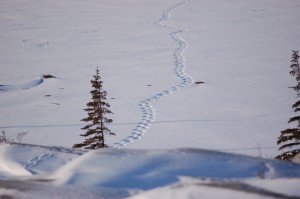 Amazing how a day in the arctic can change the entire feel and surrounding environment. Yesterday the popping greens and oranges of lichens mixed with the golden browns and reds of the tundra and willows blending with a splotchy blue sky. Today is as if the world is a black and white photograph…steel blues and gray encompass the land while changing  shades from darkening clouds filter light. Dramatic difference.