With the snow finished for the time being, the light changed again to softer, more photo friendly conditions. With heavy winds accompanying the snow, the tundra still shows some of it’s undercoat that just refuses to surrender to Winter. Soon enough all will be white, gray and blue blending together as an arctic backdrop for spectacular Winter aurora displays. 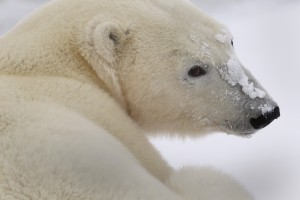 Guide Eric and group, on a rover excursion, ventured as far as the tundra lodge and was one of many groups recently to see a blue phase arctic fox; unusual to these parts in recent history. As long as Eric has been guiding in Churchill, this was only his second spotting of the animal.

Another high point of the trip came prior to this sighting as the rover covered the trail to the lodge. After encountering two sub-adults close to the trail early on, the group then viewed a sow and cub out on a partially frozen lake in the distance. Because part of this lake thawed earlier in the week, the cub was using it to demonstrate the original “polar bear dip”.  As mom dozed contently on the more solid surface, the cub dived under completely at times then reappeared up on the ice, rolling and crawling near mom. Very unusual for this time of the season there normally is almost no open water by this point. Very cool! 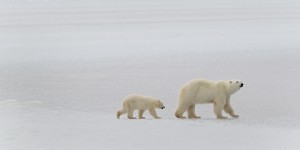 A unique sighting of a rusty blackbird near the lodge rounded out a full journey as this bird, listed in 2007 as vulnerable do to it’s roughly 85% decline in the last 40 years, showed itself against the white snow. Bonnie would be jealous.

Guide Sue and her group arrived in Churchill and headed out on a night rover experience. Darkness comes early now as a result of daylight savings though a night on the tundra is still a memorable experience. On the way out , in the soft evening light, a sow and cub had buried themselves comfortably in a snow drift…setting in for a warm rest. The group then came across a couple of males play-fighting in the lodge vicinity…napping in between sessions. Later two bears approached the rover and sniffed boots under the back deck. Sue noted that the huffing and chuffing of the bears breathing as they sniffed the foreign odors was pretty incredible. With such sensitive olfactory senses, these bears probably experience some sense of  overload when experiencing completely unique odors.

Finally an arctic fox and some ptarmigan rounded out the full evening in the CWMA…a night to remember.

Guide Brad and travelers had nice sightings of a gyrfalcon at Halfway Point and a ptarmigan flock near, fittingly, bird cove.

Later two young females, maybe sisters about four years old, played with their rover for over an hour, took baths in the new snow, and then sparred just to complete the trifecta. One of the bears ripped a piece of metal off the rover and played “bear ice hockey” with it on the ice for while.
The new, heavily drifted snow and cool temperatures allowed for extra active bears as several sparring bears were watched intently near the tundra lodge. The snow always seems to invigorate these animals as if they know the seal -feeding season is not too long off.

Back in town, at the hotel, the fun didn’t stop…two red foxes kept the group entertained for a long time while approaching guests at a range of only about eight feet.