On a beautiful clear day in the Churchill region, a few scattered clouds drifted across the Hudson Bay. Temperatures remained below freezing providing ultimate weather for arctic wildlife movement on the tundra. The shore ice is just starting to form, about five feet off the coast, and polar bears continue to anticipate a freeze that may not come too soon. 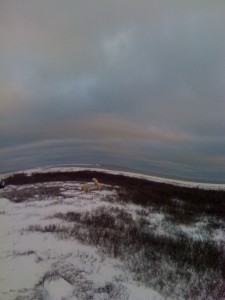 Guides Bonnie and Colby arrived in Churchill with the new tundra lodge group and before they traveled just five minutes down the trail, they were seeing at least five polar bears including a sow with two cubs off in a snow-blown willow stand, a very large male patrolling the tundra perhaps looking to scrap with another male, and another couple of smaller males wandering the land. As the group settled in at the lodge they were witnesses to more sparring and some bears off along the coast inspecting the meager ice formation. The waiting is the hardest part.

Guide Sue was also out on the land yesterday with her group of travelers and before they even got to launch they were lucky to catch a fleeting glimpse of a snowy owl up on the rise near the old radar domes halfway between town and launch. One of the only sightings this season came as the sun rose above the frosty tundra to the East illuminating the coastal rises with hues of pinkish red.

Aboard their rover the group made way out to Halfway Point. About halfway to Half way Point,…would that be Quarter Point?…they encountered a pretty unique sighting. Two young, sub – adult bears were close to the coast and sharing the remains of what appeared to be a beluga whale skeletal carcass. This area of beach has always been  a prime area for beluga carcass finds. Over my dozen years of guiding Churchill Summer groups, we would make frequent treks along this beach area to search out a beluga skeletal carcass nestled in the tall sea grasses and almost always find one. These two bruins were enjoying gnawing on any remaining meat and most likely getting a little calcium nourishment as well. Very cool sighting.

At Halfway point, the elusive blue phase arctic fox kept the groups string of luck going strong. Winding through the snowy tundra the blueish tint of the coat definitely catches one’s eye as the fox is focused on trying to catch lemmings. 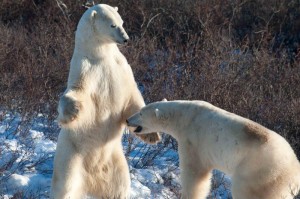 With all these early sightings under their belt, Sue then had her rover positioned near the tundra lodge where “huge” interactions were occurring in multiple directions. Just 200 yards from the lodge to the Southwest,  two sub-adults-about four to six years of age- were rolling in the snow and play-fighting with one another. The snow surely provides a comfortable, cushioning blanket for the two to enjoy the scrap. A curious arctic fox wandered nearby unwilling to join the fray.

Overall there seemed to be groups of four or five sub-adult male bears interacting with two bears confronting each other while the others observed. And, about a quarter mile from the lodge, a sow with two cubs walked together across the icy lake surface. The family seemed to be mom with a male cub that was a little larger than his sister trailing behind. A nice way to conclude a satisfying day in the North.