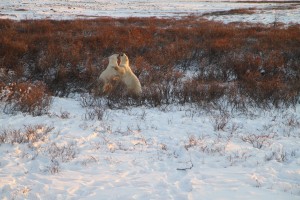 Winds calmed down to occasional moderate gusts as the windswept tundra glowed with shimmering ice crystals and nice light reflecting off the frozen thermokarsts.

Guide Melissa brought her group to the vicinity of the tundra lodge where frequent sparring thrilled all. In contrast to the mock-fighting, there were also a good number of resting bears scattered in and around the willow stands enjoying some respite from the hammering winds of yesterday. A unique occurrence (at least in the polar bear realm) of a female pushing a male around the area caught the group’s attention. This continued for a good while and then the male finally resisted and pushed the female off toward the coast. Interesting to watch the nuances of territorial interactions. A short time later a couple of younger males became curious and approached the rover, lingering with curious gazes and sniffs to the air. 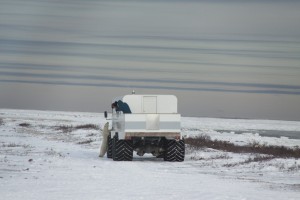 A polar bear inspects a polar rover on the tundra in Churchill. NHA photo.

Travelers with Guide Elise also found the day’s prime viewing out around the lodge area. Elise called the scene “epic” as nearly a dozen bears came upon the area throughout the day. Ample sparring bouts also provided thrills to all intermingled with stretching, lounging bears in the willows. A couple even dug day beds in the snow sheltered on the leeward side of willow patches. One of these larger males rose up from his rest and pounced against the rear of the rover. After lingering under the back grate, he walked around to the side and peered into the drivers window up on hind feet. License and registration please….oh and a big hunk of seal meat or perhaps muktuk!

A juvenile male scurrying away from a few other larger males capped off a good day in the CWMA. Traveling by Halfway Point on the way back in the afternoon provided awesome views of the Hudson Bay…calmed considerably since yesterday’s blow. 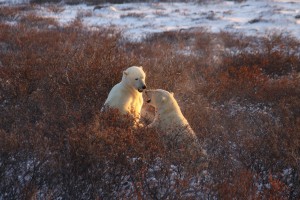 Polar bears mock fighting in the protection of the willows. NHA photo.

A wrap-up of the past week’s tundra lodge highlights presented some unique spectacles for lucky wildlife enthusiasts. Numerous bears at lodge moving about, but none have made a claim for more than a few days… yet. Plenty of sparring between bears and some big boys have been around, including one featured in some previous photos with two parallel scars across its nose. Guide Bonnie and group witnessed nursing yearlings and sow with a radio collar. This group also had a bear swimming in the bay that came over to her vehicle afterward. Towel please….I’m ccccccold!  Guide Colby and travelers viewed two sets of Sows with coy and also a larger male feeding on a tundra swan carcass…possibly a juvenile that was not developed enough to make the flight south? Other juveniles were seen near halfway point a week or so ago, so this makes sense.

Finally, in an odd anecdotal story,   guests on the lodge figured out that one couple was now living in the same house that another man in the group had grown up in! The backyard tree house still stands in the yard that was built for the former occupant when he was a kid! These folks were brought together somehow in a small sub-arctic lodge in the middle of vast tundra. I won’t even say it.