On a cool partly sunny day, guide Brad’s rover driver positioned his travelers near the tundra lodge in view of two polar bears coming towards each other, feeling each others presence and finally ending up on the gloss ice surface of a giant thermokarst. In the early morning, the ice reflected the pinkish, reddish tones of the sunrise and made for a perfect backdrop for the next couple of hours. As the bears made their way onto the ice they seemed to skate on the mirrored surface..slipping slightly but stopping in time to get running starts into a confrontation. As the two sparred incessantly all over the lake’s surface, another sparring was taking place in the area. However, this was surely the feature bout on the ice, continuing into the willows, and around snow drifts. Great morning just below the “squared” arctic circle. 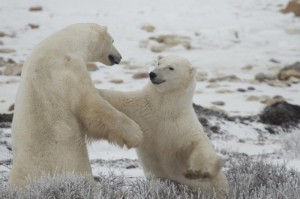 The group caught glimpse of an arctic hare which has been rare this season. A little later a male polar bear in the same area found a stray goose wing on the tundra and preceded to play with it…throwing it into the air on the icy pond time and time again. Also, lying on his back, he pawed at it and held it up with two paws as cameras clicked. Pretty cool, a rare occurrence. 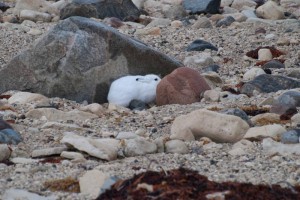 An Arctic hare hides in the rocks. Colby Brokvist photo.

Guide Elise and her travelers had a very full day with a tour around Churchill before heading out to the tundra in the early evening. As they headed out around Churchill after breakfast, they could hear cracker shots from around the inukshuk on the bay behind the town complex. The shuttle radio crackled about a polar bear near Brian Ladoon’s dogs near the boreal gardens just off the coastal access road on the town outskirts. Once out there, they saw a Manitoba Conservation truck(polar bear alert) and continued down the road, near the dog kennel area, and sure enough, a bear was in the open. The group watched cracker shots exploding around the big male and he eventually ran across the highway road heading towards the railroad tracks. Quite the scene to witness first- hand

From there the group headed out to the polar bear compound and then over to Lyon’s Park nestled in the boreal forest closer to the coastal road.  Out around the shuttle, they found fox scat which guests from Cleveland Zoo were photographing when surprisingly a red fox appeared on scene. He was first spotted up on the quartzite rock outcroppings in amazing light and then inquisitively approached quite closely before dodging in and out of the rocks…amazing!

Incredibly this experience was overshadowed by a bear lift after lunch. When guests figured out what the “surprise” Elise had for them, it was if someone had won the lottery…tremendous excitement!” Best Churchill area tour ever! “; according to Elise.
Later, en route to lodge in their polar rover, two bears were spotted …one digging in overflow ice possibly for an arctic stickleback. These fish have the unique ability to slow their heart rate substantially and basically freeze their bodies to survive the long Winter. Other groups had witnessed a fox finding stickleback in the same creek two days ago. 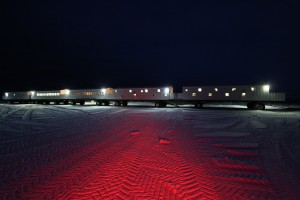 An arctic fox greeted the group as they arrived around the lodge area and he seemed to dance like a star below the stars in the floodlights beaming from the lodge. Another big timid male polar bear was in view…possibly a new kid on the block?