A light dusting of snow restored some of the Winter feel to the region and made for more picturesque wildlife viewing . Polar bears continue to move across the tundra although each day seems to present different circumstances and inconsistent behavior between the bears. Most likely this comes as a result of the crazy, unusual weather fluctuations over the course of the season so far. “Unsettled”; pretty much describes the Fall season thus far. 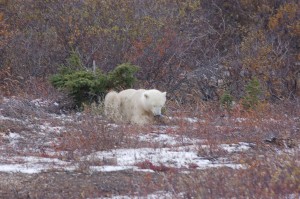 In the morning around 11Am,out at the Polar Bear Compound, a sow and coy were bailed out of jail by TFI french TV, netted up and flown up North to Seal River area for release. Because the compound is only at half capacity at the moment, we know that flight “sponsorship” was provided in order to document the experience. Guide Amy and her travelers were fortunate to be on tour and were able to make it out to watch the whole production. As many of these as I’ve witnessed; they never get old…watching polar bears fly overhead in nets dangling from helicopters ..most likely one of the only places on earth to find that thrill.

Meanwhile out on the CWMA tundra, Guide Karen and her group were “rovering” around exploring the vast, frosted tundra. Three different groups of ptarmigan were spotted throughout the day while the tide in the Hudson Bay was way out early on and then in close to the barrier beaches afternoon. Perhaps that tide pushed some polar bears farther inland later on as Karen’s group searched. 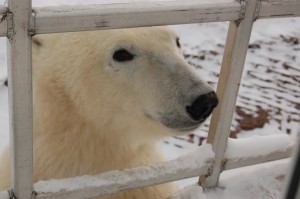 The morning had offered distant looks through binoculars at a number of bruins roaming the land though not many up close. Sporadic wind swept  snow over the frozen thermakarsts capturing shimmering rays of sunlight filtering through clouds above. Suddenly, a group of four bears was spotted heading in toward their rover from a considerable distance. Moving slowly from such a far distance, the group wasn’t sure if they would come near enough for a close encounter. Two of the bears split off and went a different direction but the other two kept coming. Soon they came closer..then even closer and sure enough bee-lined right to the rover. The two walked around the rover; seemingly a friendly pair though also shooting a watchful eye at one another….investigated underneath the vehicle and then stood and leaned with paws pressing onto the side of the rover. They spent some time sparring as well and swatted and clenched jaws in mock -fighting mode.  Finally,after about three  hours, one moved away toward the tundra lodge while the other stayed for a rest alongside the group. Two other rovers came on the scene but the bear seemed to claim Karen’s as his and proceeded to tear off a piece of trim work from their rover as a sign of that affection. He proudly displayed it to all…tossing it up and gnawing on it a little. A rover tooth!

The buzz around town was Martha Stewart. She made it to Churchill to see some polar bears. Stewart bypassed the polar bear “compound”. We all know her…right? She own’s her own company providing all those perfect home furnishings….oh and yeah, she’s also convicted felon. She was convicted of obstructing justice stemming from the sale of nearly 4,000 shares of Imclone Systems back in December 2001 a day before the share price tumbled due to the FDA rejecting the company’s bid for approval of it’s cancer drug Erbitux. Stewart’s stock broker’s assistant testified that he was instructed to tip her off about the decision which was not made public until after the loss in share price. Stewart averted a $51,000 loss and professed her innocence to keep her stockholders trust. She served five months in prison and six months under house arrest….and never admitted guilt. Conversely,  I wonder how many unknowing people lost their retirement funds? Just  thought I would jog everyone’s memory…it’s a “good thing” right?