A partly cloudy morning gave way to bright sunshine in the early afternoon while temperatures stayed below zero. Wind chills were recorded at about -24F. Ice continues to form at a rapid pace allowing polar bears freedom to test the land-fast ice building along the coast. All the fresh water pouring from the Churchill and Seal River’s freezes rapidly when dumped into the bay. Huge ice chunks forming mini bergs in the rivers are ferried out when the tide turns.. creating a log jam along the coast. Water between the chunks freezes and binds them together initiating a patchwork -like platform extending into the Hudson Bay. 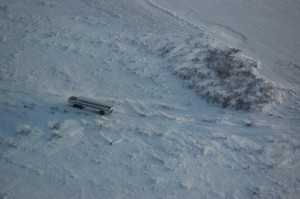 Travelers with Guide Scott witnessed this happening early in the day as they moved toward the coast in the CWMA.  On the way a lone male passed by as they traveled the inland road toward Halfway Point. Two arctic foxes frenetically searched for lemmings, noses to tundra, all around the parked rover. Scanning the coastal tidal zone out past the point, the group viewed many bears tentatively stepping on the  freshly formed surface. One stubborn bruin moved with reckless abandon and continually plunged through ice into the icy water. I have seen this before myself….incredibly mesmerizing to watch. Goose bumps every time the bear crashes through.

Later in the morning the bears began moving inland from the coast. As Scott’s folks enjoyed some coffee close to the tundra lodge, a couple of younger bears were near the rover curious though tentative. Just about noon many big males wandered into the area, pushing each other around with dominance tests. A couple of scrappy three and a half year old bears herded each other around under the lodge. These 700lb scarred males were growling incessantly while they kicked at and chased each other back and forth from the position underneath. One of the big boys came up to the rover and stood up to just under the back railing around the deck Scott kept an eye on his travelers ..not allowing them too close to the rail. Bears love finger food. 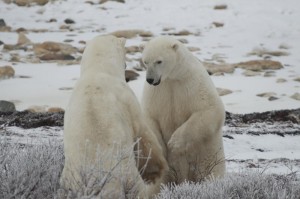 As the afternoon continued, a group of five large males gathered in the distance by some willows and began to play-fight. They were paired off  now just 10-15 meters off the back grate as the rover was able to position more closely. At times the sparring got pretty serious with hard, aggressive shoves into each others’  chest. The action there was accentuated by full light from the emerging sun and a good three hours of amazing viewing was enjoyed by all.

Leaving the tundra the group could see more bears out along the ice edge again this time bathed in the orange glow of another amazing sunset.

Guide Leah, out and about on the tundra with her group, sighted a few bears  but most were resting in and around the willows against the lakes in the snow drifts. They also were noticing numerous bears along the coast testing the ice surface.
As we  know the seal population has been doing strange things this season. Aside from stranding themselves in the intertidal zone at low tide earlier in the season, one bearded seal was found about two miles inland wandering along down an access road.
Some exciting information related to these occurrences has come to light. Orca whales (killer whales) have been seen recently in the bay; possibly accounting for the strange suicidal seals on land. Having guided 11 seasons of Churchill Summer whale tours, I have only heard rumors of one other Summer sighting of  orca’s in the bay and never of any Fall sightings. . Exciting news indeed.
Guide Brent and his band of photographers were having a great day on the land. First thing out from launch they had an incredible photo opportunity as a large bear burst out of  self -constructed snow cave in a huge drift of snow just by the side of the trail. The bruin rose up, wandered a bit , then returned to the cave and reclined facing out with crossed paws. I think there actually was some drooling going on aboard the rover.
The remainder of the day was all gravy after this experience and with the fantastic light the gravy was pretty tasty.  Getting images of bears along the coast testing their footing highlighted by all the patterns and blues and gray’s of  the snow -covered tundra all made for another successful session.
The bright orange sun globe melted into the horizon as polar bears continued to roam the coast with intensified expectations….seals oh seals where are you today?