The cold persevered through this past week ranging from -23c to -35c with wind chill feel of up to -55. Travelers with Natural Habitat Adventures and guide Karen arrived on the tail end of the previous week’s stormy front lingering in the Churchill region. Brrrrr-ave travelers from down South. 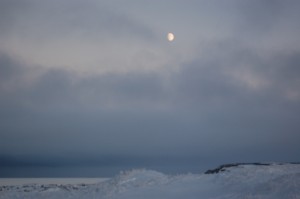 With the Full moon peeking through waves of wisp-like clouds the aurora was playing hide and seek with anxious guests searching longingly for the mysterious phenomena. The ice -packed Hudson Bay glowed with reflected moonlight emanating from a stellar moon-like landscape. Travelers awe of this scenic vista helped assuage the misfortune of not viewing the heavenly light display. The arctic has a way of  creating wonder out of the most common visions or actions. The Hudson Bay needs little effort to thrill inspired visitors from far and near.

Sunlight graced the area the next day as well as frigid air once again. The group listened to Metis elder Myrtle in the morning as she spoke about her life on the land and the Metis culture. The Metis people are a mixture -the french definition of Metis- of European, mainly French and native peoples of north America, namely Cree.

After the morning cultural talk, Karen and driver/historian Bill Calnan escorted the folks out of town , stopping at the inukshuk behind the town complex for photo’s and then heading out along the coast road through some snow drifts en-route to the Churchill Northern Studies Center. The center hopes to complete construction on the new ark-like building by Spring. An Earth Watch group was thrilled to see some other hearty travelers emerge from the town road to their isolated research center far from the rest of civilization.

Evening brought renewed hope for viewing “skylights” as shortly before 11pm the heavens had cleared allowing sighting of the Big Dipper, Orion and Canis Major among other constellations. Soon an arching swoop of indistinguishable light or perhaps faint clouds arced across the sky. With the moonlight, the arc was faint enough to evade definitive description. 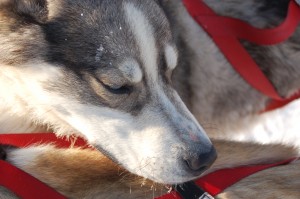 As the new day dawned a full day in the North unfolded. The group was touched by Caroline Bjorklund’s Dene cultural talk in the Caribou Hall. After a day out on the trails with Dave Daley’s dogs at Wapusk Adventures, the group enjoyed a hot drink and bannock in the warming hut. Guide Karen was happy not seeing any white splotches on faces.. signaling frostbite. The wind had subsided for their excursion and was thoroughly enjoyed by all. If the dogs love the cold why shouldn’t the guests?

Bill Calnan closed out the evening with his historical talk at the Anglican church at the Northwest corner 0f town. After feeling the passion of  Franklin’s quest and the early interactions around the Hudson Bay, the gazes skyward were met by clouds once again. The moon kept emerging like Franklin’s Erebus through the fog so long ago.. though no aurora.

As the adventure came to an end, the group gathered back in Winnipeg recounting the true feel of  arctic life they experienced …and happy also to be back  South after the amazing trip.