As winter has settled in to an up and down cycle of cold and colder, everything around has frozen and most life aside from the human population has come to a standstill. Temperatures are just below freezing again- considered a thaw by most Churchillians- though expected to dip again by weeks end into the -25C to -35C range. Sunrise is at 8:22 and sunset at 4:39…so the days are expanding grudgingly like the crusted ice pans in the Hudson Bay. 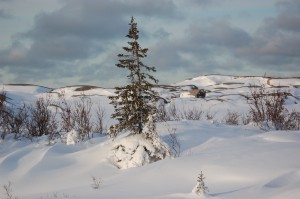 While the omnipresent ravens appear all around Churchill, foxes-both red and arctic- also roam the tundra and town alleys searching for one more morsel of sustenance to get them through the chilled night. The braver, more adventurous of both species follow the polar bears out onto the Hudson Bay where food becomes available in the scraps of seal-kills by the massive bruins. These provide larger amounts of  food at one time with much more exposure and risk coming along with the bounty. Weather is unforgiving out on the ice with little shelter other than the elevated pressure ridges formed from colliding ice floes. And then there’s the risk of getting too close to a bear and becoming an arctic home -run of sorts. Winter ball at its’ best. 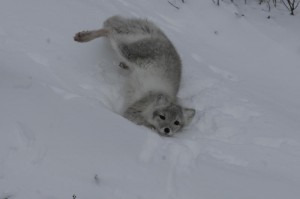 So..that is why many of these beautiful critters opt to stay at home  around Churchill , their home range, where food supply..living and non-living can be scavenged and shelter comes in a variety of forms.

Although the arctic North has traditionally been territory of the arctic fox, the red fox is winning the “evolutionary” tundra war so to speak.  Arctic foxes are physically more prepared for the frigid elements in the North with a smaller body mass, fur lined soles of their feet, and apt white furry camouflage. They are the perfect species “team” on paper…the club that will endure forever and win the championship without playing the games. However, mother nature doesn’t work that way….and there is a scrappy contender in the picture now….the red fox. 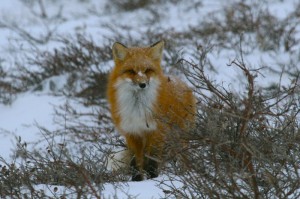 The red fox has persevered without the tools of the arctic fox. Both have extensive similarities such as average lifespan of three to four years, gestation period of about 52 days, average litter size of between four and seven kits and similar denning aspects. Aside from the aforementioned upside of the arctic fox, the two species have alternated the territorial give and take. Now, however, there seems to be a distinct change in the fox hierarchy.

A couple of glaring changes in the ecosystem have allowed the red fox to gain ground on the arctic fox. Most notably is the hunting of  the arctic fox. Because of the color, arctic fox pelts are more desirable for fur products such as clothing, boots and mittens. Also, hunting of the gray wolf – a premier predator of the red fox- has allowed the proliferation of the species in the North. Red foxes are already have the distinction of being the most widely distributed canid…ranging from the Arctic circle, through Asia and into North Africa… and they are extending their range at every opportunity.

About five years ago during Churchill’s polar bear season,  there was a notable absence of arctic foxes. This void came after many bountiful years of the white fox abundance across the landscape. The word on the street was that the population was decimated by a rabies outbreak which tends to run rampant in the arctic species once contracted. Subsequent years saw red foxes dominate reported sightings by researchers, travelers and guides.

With all these variants stacked against the arctic fox, it will be interesting to see over the coming years if the slight increase in recent sightings is a trend toward recovery in the North or not. Only time will tell.