Caroline had heard, and read from numerous sources, that her Dene tribe from Northern Canada was long ago part of what is known today as the Navajo nation in the United States. For as long as I have known Caroline she has dreamed about reconnecting with the lost brothers and sisters she has never known other than in her heart. This trip was a chance to see if a connection was there.

The focus of the journey, in which I had the pleasure of joining Caroline, was the Gathering of Nations held at the Pit on the University of New Mexico college campus. The beautiful sunken basketball arena served as an awesome venue for hundreds of tribal representative dancers, drummers, singers and crafts artisans. The gathering is the largest “pow wow” in North America taking place over a two day period. Two long exhilarating days. Having never been to a “pow wow”, this was far from what my mind had conjured up as the setting though I soon realized once the drumming and dancing started, the setting really made no difference. 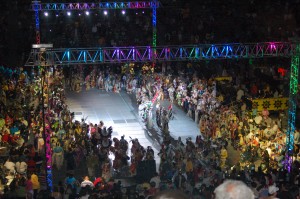 I used to follow the Grateful Dead back in the 80’s and the feel and vibe of the entire scene, not just the performance is what kept me coming back to the shows. This, as I realized by the second day of the gathering, was a feel quite similar to those experiences….minus any drugs or alcohol. That reliance on drugs for many “deadheads” is what, in the end, caused my interest to wane.  As much as the drug “feel” was apparent at dead shows, the sober innocence “feel” was also quite noticeable at the pow wow. The energy inside the arena and friendship vibe outside around the food court and arts tent were refreshing. It’s funny how well people treat others when not under the influence of any drugs. Sincerity shines through. 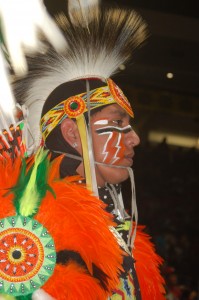 The dancers from every possible native group wore their feathered “regalia”, not “costumes” as I overheard one dancer correct a woman from Texas. The colors were as vibrant as the energy rising from the floor in the middle of 18,000 or so people in the arena. Young as well as older dancers were judged by a panel floor-side with prizes awarded to the best in the competition. However, even though it was a competition..technically.. the feel of the whole thing never gave way to a competitiveness. It was as if the all were dancing and drumming to, at once, celebrate their past roots as well as fend off any demons that still exist. 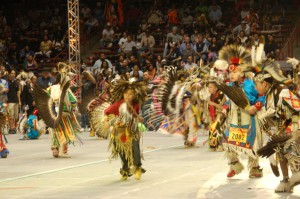 Young dancers at the Gathering of Nations. Steve Selden photo.

Meeting and engaging in conversation with people allowed Caroline to feel part of a bigger native family here in the United States. In Canada, near Churchill, only a few native tribes exist..in the states, as we all know, there are numerous groups. A little overwhelming for a Dene woman living in a town of just 800 or so inhabitants..not all of which are even native. The gathering opened eyes and minds..both Caroline’s and mine..of the beauty of all peoples coming together as one…a dream truly imagined and found for these two days at least.  More of this dream trip in the next post..stay tuned. 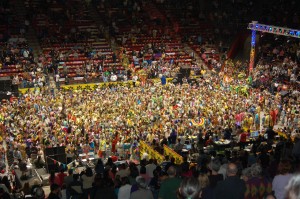