June in Churchill is for the birds…..and bird watchers of course. Wildlife guide and ornithologist Bonnie Chartier wrote the book on the birds of Churchill..seriously…she really did. The Birds of Churchill, currently out of print, was a collective of Bonnie’s years and years of dedication studying all the birds that come and go throughout the year in Churchill,MB. 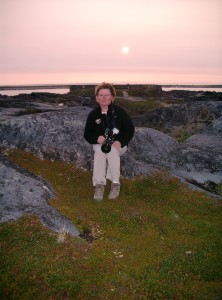 I’ve worked with Bonnie for over ten years guiding Summer and Fall trips in Churchill. Without a doubt, almost all the bird knowledge I’ve accumulated over the years, comes from my first hand experiences with Bonnie as my co-guide, mostly in the early Summer month of June. This month is migration month when countless species arrive in Churchill and nest or feed or both. Bonapart’s gulls, Arctic terns, sandpipers of different varieties, Jaegers, Sandhill cranes, and on and on and on….the search and discovery of these creatures provides an endless treasure hunt of sorts in the sub-Arctic landscape.

My favorite anecdotal story of Bonnie comes from from when we were guiding a summer contingent of Natural Habitat clients in Churchill and we pulled our mini bus filled with travelers up by the port to scan the beach along the Churchill River for Ross’ Gulls…the elusive and rare species that resides in Churchill in the Spring. There was another couple there with a spotting scope set up..real birders…and they had a copy of Bonnie’s book in hand. They started asking Bonnie questions regarding the gull but didn’t have the faintest idea that Bonnie was the author of the book. They had a little bit of an attitude…as birders do…until I brought to their attention who they were speaking with. The change in their faces was priceless as they fumbled for a pen to get bonnie to sign the book. We all had a good laugh.

Bonnie filed a report from Churchill this Spring as she was there doing some atlasing…or searching for breeding bird evidence. She reported, much to everyone’s delight..especially the birds, that plenty was apparent.  A list of species she witnessed includes King Eider, Thayers Gull, California Gull, Iceland Gull, Glaucous Gull and Glaucous-winged Gull, Brown Thrasher, Trumpeter Swan. No report of the Ross’ Gull…but I’m sure many were searching ..book in hand.

Tundra flowers were just getting going as the month lenghtened and the beluga whales were coming into the Churchill River while the ice was flowing out. A picturesque scene I know very well….pure beauty. 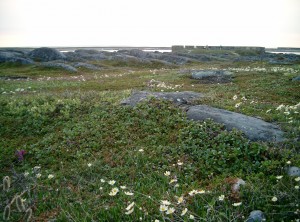 Since Bonnie has left Churchill, the polar bears have come off the ice and some have migrated into the area. One bear has been shot for chasing a tourist who was out alone on the beach photographing. Bonnie’s brother Jack, a manitoba Conservation officer, was not happy with the “fool” for putting himself in that position and in the end causing the bear’s demise. The bear was about half the weight that it should have been…probably the reason it was seeking out some prey. I have said for years now that it’s only a matter of time before somebody uninformed on bear safety finds themself in a position of extreme danger. This one was close and I’m sure not the last. At any rate this kind of human behavior will certainly put the animal in danger.  Too many people come to Churchill on their own and don’t know basic background information needed to be wandering around on the outskirts of town or in and around rocky beaches. This time of year can be more dangerous than the fall since only a few bears seem to be lurking…people get complacent.

Finally,the roof of the Lazy Bear Lodge blew off  in a Spring windstorm and about 150 people came out to help get the  large hole covered. All of the firemen and many Churchillians pitched in to get the inn back up and going. Living in a small tight-knit community really brings people to your door..er roof…in times of need.

Always interesting up there it seems. Rumor has it that someone saw old Reverend Lofthouse lending a hand as well!