Churchill Summer Off and Running

Summer in Churchill has officially begun as a group of travelers from Natural Habitat Adventures led by Guide Sue Zajac waded into the Hudson Bay off the beach behind the town complex just in the shadows of the giant stone inukshuk. The “water is warm” reports Sue as the weather has been balmy with temperatures in the eighties. The shallow water along shore has absorbed that heat for the time being.

Traveling along the northern train route through boreal forest, taiga and tundra the group disembarked in Wabowden while the train continued to Thompson for a four hour wait. Ongoing work along the tracks near Thompson is a good sign for continued running of the Hudson bay line.  While on a coach tour of the surrounding area, travelers viewed a mature bald eagle fly under the bridge and land in a black spruce on a tiny island in Sasakew rapids. The excellent bird spotting site provides varied species just off the main highway up to Thompson.  Bunchberry is in bloom here and near Pisew falls while the red breasted merganser ducks circled in the eddies amongst the little isles that spot the water.

Arriving in Churchill around noon..just a few hours late..not bad givin the high temperatures and how they tend to wreak havoc on railroad iron. In town the rain made it tough to get on the water to get up close with beluga whales. However, the group finally made it out in zodiacs and found whales chasing a early season capelin run. Capelin are smelt – sized fish that spawn this time of year and are a staple for belugas. Whales follow these fish for extended periods while they zig- zag across the Churchill River. Pods of whales seem disinterested in any humans in boats while feeding though still are majestic to watch as they move through the dark steel water. 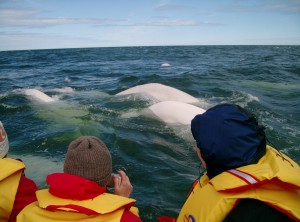 A busy third day of multiple trips out on the water brought a bonus for the patient travelers. As the group moved out into the Hudson bay along the spit of land that holds Fort Prince of Wales…Eskimo Point just to the North revealed  two of the reported four polar bears resting. Another bear was seen swimming in the chop just off land heading back to the shallows. Truly an amazing sight which i have witnessed myself over the years. That image will stay with you forever!

A final day on the water was again rainy with a warm Southerly breeze. This day however provided beluga’s with choppy waters. Beluga’s, curious by nature, approached the zodiacs and followed the boats by the dozens…coming near enough for some passengers to touch their melons just under the water.The whales also provided some unusual episodes of shiny heads protruding from the water. This rougher water often will allow for that. All in all fantastic whale watching on a true arctic-like Summer day.

Excursions out to the tundra provided some birding sightings that happened to be life-listers for a couple of folks. A pine grosbeak and common redpole earned the checks ….And later in the trip, the group headed out via rover and had a bbq on the land. A curious caribou crossed right through the trail before heading out East. A northern harrier, great blue herron and many yellow warblers flitting in and out of the willows capped off a marvelous afternoon.