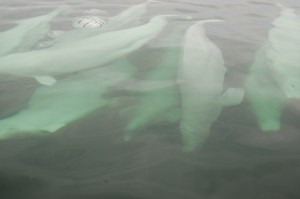 Following a 48 hour train -ride from Winnipeg, Natural Habitat guide Sue Zajac and her 15 travellers pulled into the Churchill train depot to find beautiful 80F temperatures and clear skies. Quite the change from the group’s side-trip off the train to the Waboden/Thomson area where smoke blowing in from Ontario fires clouded the Summer air. Sasegew rapids and Pisew falls still provided great vistas and excellent birding in a little less visibility.

With the warm Summer progressing nicely, sweet vetch, saxifrage as well Arctic cotton-grass are all peaking. Many other prolific wildflowers are also on the cusp of blooming. Mosquitos are still fairly abundant as they pollinate a good number of these plants. They will start to wane soon as the dragonfly population increases and the feast begins. Hikes through the tundra and boreal forest are still worth a small blood donation however as one can see amazing rare orchids, animals such as foxes,and numerous bird species in nesting form.

Whale viewing remains spectacular out on the Churchill River as well as the Hudson Bay. And, although no polar bears were spotted out along Eskimo point North of Fort Prince of Wales, they still are in and around the region. The Lazy Bear lodge, complete with new roof, had a bear lurking outside for sometime now…though Sue thought they may have finally captured it in the culvert trap just behind the inn. As the group was near departure from Churchill, the trap was not seen…  good sign that a capture had taken place.Some of the group went snorkeling with the beluga’s in the river and had some amazing, once-in-a lifetime encounters. The 10 year – old birthday boy on the trip found this his most amazing experience of the entire trip. I’m with him on that one. Other travellers were content with kayaking in the calm, deep waters just beside the port docking area. Small pods of five – ten whales, swimming with amazing synchronicity, approached the kayaks from one side, submerged under the boats and dissapeared for up to 15 minutes at a time. The exhale of air the beluga takes through its’ blowhole is a sound one never tires of. An exhil﻿erating feeling hearing that resounding off the surface of the water while watching the white leviathan submerge itself. Water-level is truly a special way to spend time with these creatures.

This time of the season also brings opportunities to experience sows training their calves following an initial nursing period. Although overlapping groups of mothers give birth throughout the Summer, the early-summer calves are just now learning life skills from mom that will allow them to survive in these challenging Arctic waters for the next 25-plus years.Feeding skills and diving deep takes months of practice for these young ones. All the time the steel -gray calves stay seemingly glued to their mother’s backs.

In other news, the port of Churchill is preparing for loading the first transport ship of the season. In what is quite possibly the final season of extensive grain -shipping, all port officials and workers are hopeful the attempt by the government to dissasemble the Canadian Wheat Board (CWB) falls to political resistance over the next few months.

Snow geese have been glaringly absent on the tundra so far this season..a stark contrast from years past. Extended hunting seasons and higher quotas down South have possibly impacted the population’s migration patterns as well as overall numbers. Another thought is that  food sources out along the Hudson Bay have been exhausted to the point that the geese have ventured elsewhere. La Peruse Bay, their traditional feeding ground, has shown clear signs of vegetation decimation over the past decade.

A musicfest was held over the past weekend in the town square as local Churchill musicians mixed with others from Winnipeg to create a festive atmosphere from mid-day to midnight. And when darkness finally did set in over those evenings, green -ribboned arcing auroura borealis awed all that ventured out late -night. ﻿Another unpredictable bonus the Churchill Summer always seems to provide!