Churchill Bear Season Up And Running

Natural Habitat guide Karen Walker didn’t have to wait long for her group of travelers to see what they had come to Churchill for.  On their first tour to the tundra, a night rover excursion, the group spotted a polar bear in the distance. The excitement grew during a  five-minute drive that brought the tundra rover within a couple of hundred yards of the animal. In awe, as they watched for about 20 minutes, many on board could not believe the calmness of the bear. Moving ahead after seeing another bear in the distance, they came upon  a polar bear laying over the top of the caribou carcass, discovered earlier in the week, just about two hundred yards away.  Another 15-20 minute drive farther and they sighted another very large bear.  It stood for the group to get a good look at it then relaxed itself down amongst the willows.  So, within the first two hours out on the tundra, the group had encountered three polar bears!  Not a bad start to the expedition up North. During an impromtu birthday celebration for one guest aboard the rover, the entourage was greeted by some scattering willow ptarmigan on the tundra as well as an Arctic fox nosing around perhaps looking for a slice of cake itself. 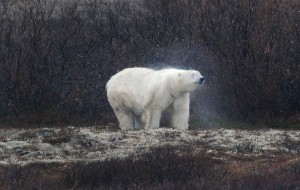 The following day as the group headed out to the Churchill Wildlife Management Area (CWMA),  they sighted the two bears they had seen the night before.  In the afternoon, while situated in a spot to view the polar bear devouring the caribou they actually viewed the bear ripping flesh off of the caribou. Another occurrence that I cannot remember seeing or hearing about in twelve years of being involved with Churchill polar bears. There’s always something new happening each season.

Later on in the day the group rumbled out toward the coast past first tower and ptarmigan alley near the flats. Karen noted that the colors of the grasses & seaweed were “very, very beautiful.”  Golden yellows, deep rust, red, browns, and black. Tundra colors in the Fall are a landscape artist’s dream. The group saw a few bears out there as well though none of those animals were very accessible for the rover.  However, as this season has been offering, the travelers were fortunate once again to spot some  more ptarmigan, then an  arctic fox chasing snow buntings, and an Arctic hare in its’ white winter coat attempting to hide up against a brown willow bush. Um..not such great camouflage.  The group was also treated to a display of two dark-colored juvenile gyrfalcons chasing after a snow bunting. Swooping  past the rover several times, all the while changing directions attempting  to catch their prey, the aerial dog-fight maneuvers emerged in and out of the patches of fog thrilling all eyes down on the rover.
On the groups final day excursion to the tundra in the CWMA, the first two bears had vanished. With not much but a pile of bones remaining from the caribou carcass, a few ravens were mopping up the last leftovers. Moving North to Halfway Point Karen’s group of traveler’s sighted a nice-looking bear on the beautiful coastal rocks with the Hudson bay stretched out behind.  This large male put on a good show, rolling around with his huge paws flailing up in the air. After napping he teased the group by lifting  his head every once in a while just to keep watch on the suspicious looking machine with giant wheels.

After this incredible encounter, the rover headed along the Inland Trail searching for caribou, but had little luck with the elusive ungulates. Soon after a flock of about 100 snow geese were visible on the tundra …a somewhat rare sight the past couple of seasons. Despite their abundance in prior years, hardly any were spotted this past Summer. This flock might have arrived in late Summer and stayed out farther to the East. Karen noted that about two-thirds of the flock were in the blue- color phase. These birds are surely an amazing Arctic sight to take in when amassed in large numbers.

Finally, the highlight of the trip for the guests was out on the coastal lowlands to the East.  An adult male bear walking along the coast spooked a five-year-old female polar bear and she began trotting away from him.  She was splashing through the shallow ponds just a couple hundred yards away from  the rover.  Brendan, the rover driver/guide parked  in a perfect spot, and eventually she walked up toward the vehicle, coming within only 30 feet.  She then walked back and forth a few  times, sniffing at the air and staring right into the astonished eyes of the Arctic travelers.  Everyone was able to get a excellent look at one of the North’s finest creatures.

On the last day, the wind picked up tremendously inciting enormous waves to crash along the shores of Hudson Bay. White sea- foam accumulated along the rocks looking like ice chunks from afar. The mist & rain continued much like almost the entire trip. Just  going outside was quite an adventure and fortunately the temperatures remained bearable. The group took a ride out to the weir along Goose Creek road and spotted a couple of river otters in a tributary along the way. for a few brave souls, climbing to the top of the weir observation tower in the frenetic wind was another highlight of the trip…good old sub-Arctic gales. A fitting finale to a most adventure -packed trip!

Today, October 18th, Churchill is voting to determine whether or not they will continue to add fluoride to their drinking water. Voting is 11-8 today and I’ll give you the results first thing tomorrow as well as another update. Stay tuned…should be an exciting result.