Doesn’t quite seem like a year has passed since last bear season. Maybe all the bear activity this past Summer and Fall has kept them in the forefront of our thoughts..kind of like Spring or Summer training for the numbers expected for is October/November in Churchill.

The early season had the seniors group in Churchill, accompanied by Dene elder Caroline Bjorklund, out on a tundra rover trip in the Churchill Wildlife Management Area (CWMA). The group had a beautiful day on the land and saw a healthy male bear out by the Great White Bear tundra lodge. The big male seemed healthy and in good shape. The sentinel bear hopefully will portend a season of exciting polar bear behavior and good, robust animals. 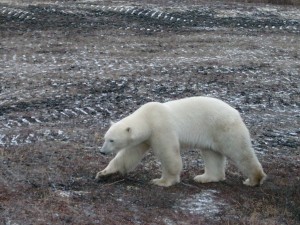 Polar bear on the tundra.

Churchill is currently under a wild sideways blowing rainstorm with temperatures hovering above the freezing mark. This also could be a sign of some frenetic weather for the upcoming season. Early October is usually fairly calm and uneventful on the weather front. We’ll see how this first storm turns out and if it turns into any of the white stuff. Sled dogs as well as mushers across the Churchill region are waiting with baited breath for a possible early sledding season.

The first official tour group of the season was out on the tundra just a few days ago and the numbers of bears already have escalated. Eight males and sub -adults were spotted over the course of the day and a happy group ventured back to town with exciting stories of the North. The season is just underway though the prospects for seeing good numbers of polar bears seems positive. News from the tundra lodge with be forthcoming..can’t wait to hear what’s going on out there!

The vote by Churchill residents to possibly eliminate the process of adding fluoride to their water is less than a week away. Many towns throughout multiple provinces in Canada have taken these steps…we’ll see how it goes soon. We will keep you posted.