Hudson Bay Helicopters has been running charter tours for travelers in Churchill for many years now. Typically the flights start out along the coast and head due East all the way to an area known as Cape Churchill. The Cape is an early season gathering spot for polar bears awaiting the annual Hudson Bay freeze-up. Usually this time of year polar bears are starting to gather near and around the Cape ….however not to the extent they are now. The numbers are impressive for sure.

On the flights out along the coast, sporadic sightings of bears have been reported roughly aligning with  the numbers sighted in the CWMA and elsewhere on the tundra. Once over Cape Churchill though, groups of between five and nine bears have been seen with even a confirmed sighting of about 14 bears in a line of close proximity. Natural Habitat guide Melissa Scott has been leading polar bear trips for over a decade in Churchill and she has “never seen this many bears  at the cape this early in the season.” Over 30 bears in all have been tallied!

Flights out to an old polar bear denning area on the 22nd of this month had beautiful “sunny morning light” according to Scott as she accompanied her ultimate Churchill group on the flight excursion. Looking down at the patterned ground covered with verdant caribou lichen or “reindeer moss” and the slightly ice encrusted tundra lakes, the guests surely felt the Arctic spirituality from above. After a sighting of a polar bear sow with two cubs of the year (coy’s) the moose numbers were just as impressive as the gaudy numbers of Cape bears. Along the Deer River, moose were spotted in and out of the willows. The return trip revealed a group of roughly 10 moose, including two cows(one with a calf) and eight or nine males all in the same area. Breeding season is still going strong apparently. 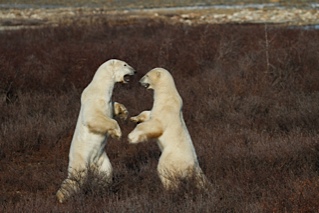 Meanwhile, back on the tundra,guide Karen Walker and her travelers experienced an amazing day without traveling farther than Bird Cove in their tundra rover. Melissa and group had viewed bears close to the area the day before from helicopters so three groups headed to the spot the following day. At the outset, a pair of polar bears spent about an hour around Melissa’s rover..even standing and leaning against the vehicle, before investigating the others. These two males, around four or five year- old’s, seemed to be good buddies. They sparred and wrestled for over a half hour and then lumbered  away into the willows for a nap. Karen’s rover circled the old loop road and then the driver situated the machine near the rocks. Then to the amazement of the group, the same two bears reappeared from their slumbers and resumed their wrestling bout. After awhile the bears curiously sniffed at the boots of the humans on the rear observation deck through the steel grate. All in all the bears spent almost 45 minutes under and around the rover before heading off into the cover of the undulating, craggy granitoid rocks. 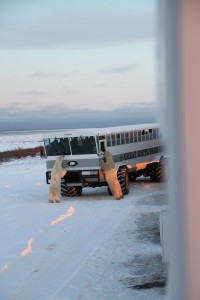 On the back toward launch a majestic, thick auburn-furred red fox with fluffy tail seemed to lead the rover back home as it jumped weightlessly in and out of the willows along the trail. Four ptarmigan at about 75 yards added to the Northern palette.

Karen’s group also had some incredible sights from their helicopter journey. Aside from multiple bear and moose sightings, the group aboard the choppers also viewed about 20 seals on the rocks near the weir on the Churchill River. Heading up river toward the mouth, they pulled over to the West bank hovering very low above Sloops Cove. Once there, they were able to read the rock-engraved signatures of Thomas Hearne and others who explored the region hundreds of years ago. Amazing to think what they would think seeing the likes of a helicopter above the cove.